A game of connect the dots for you all.

The Politico internal memo from a little bit back:

Stories need to be both interesting and illuminating–we don’t have the luxury of running stories folks won’t click on or spend several minutes with in the paper.

a) Would this be a “most e-mailed” story?

b) Would I read this story if I hadn’t written it?

c) Would my mother read this story?

e) Might an investor buy or sell a stock based on this story?

f) Would a specialist learn something from this story?

g) Will my competitors be forced to follow this?

IN MOST CASES, THE ANSWER WILL BE “YES” TO SEVERAL OF THESE QUESTIONS IF THIS IS A STRONG POLITICO STORY. If you are not certain that several of these are “yes,” you can reframe your reporting and analysis so people will say, “POLITICO is reporting…” or “The way POLITICO put it is…”

If your friends or source are buzzing about something related in any way to public affairs, don’t ask yourself WHETHER it’s a Politico story. Ask yourself HOW you can make it a Politico story, to capture built-in traffic and mindshare.

What the Politico took away from the expansive 60 Minutes interview:

His remarks came in a“60 Minutes” interview in which he was pressed by Steve Kroft for laughing and chuckling several times while discussing the perilous state of the world’s economy.

“You’re sitting here. And you’re— you are laughing. You are laughing about some of these problems. Are people going to look at this and say, ‘I mean, he’s sitting there just making jokes about money—’ How do you deal with— I mean: explain. . .” Kroft asked at one point.

“Are you punch-drunk?” Kroft said.

“No, no. There’s gotta be a little gallows humor to get you through the day,” Obama said, with a laugh. 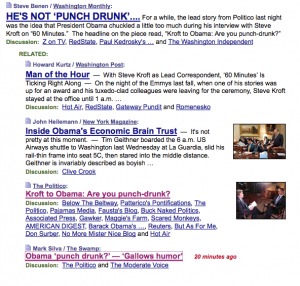 The most read section at the Politico this morning: 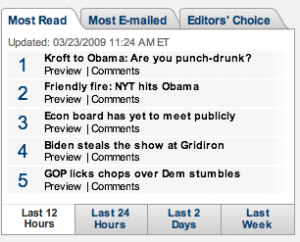 If you watched the 60 Minutes interview and you think the most important part of it was the “punch drunk” portion, you are part of the problem.