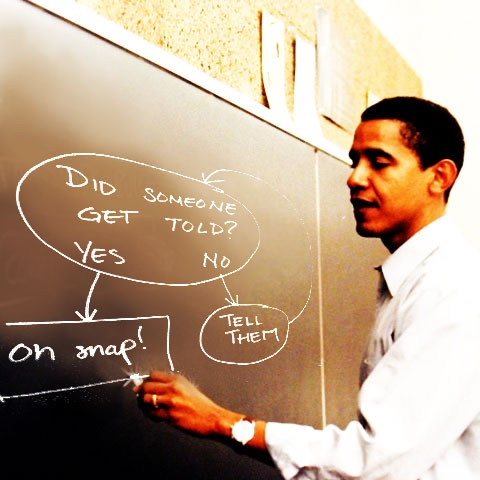 Mr. Lauria, the President’s representative is on the phone and he says for you to, and I quote, “Get that weak shit out of here.”
***

If you have paid attention the past few weeks, you have no doubt heard the plaintive wails of the non-Tarp Chrysler lenders, their attorneys, and our brave defenders of all things Galt hollering about the rule of law and fiduciary duty and the sanctity of contracts and blah, blah, blah. Hell, even if you have not been paying attention, you had to have heard the screams. At long last, after wading through hundreds of tear-stained columns at Clusterstock (far more than any individual should ever be forced to read in a lifetime, but I did it all for you), unable to get the frightful sound of Henry Blodget shrieking out of my head, I have finally found someone less sympathetic than me (plus, unlike yours truly, he knows what he is talking about):

Attentive readers will remember that I asserted several substantive points1 in my tirade. First, the negotiations over debt recovery by Chrysler’s secured lenders in the company’s restructuring were just that, negotiations, not a cookbook allocation of value according to rigid, unvarying legal precedents. Second, while acting unequivocally like the schoolyard bully throughout, the Obama Administration did nothing fundamentally wrong or even unexpected by pushing hard to further its own political objectives. It certainly did not run roughshod over the rule of law or undermine the bankruptcy process, as some wilder-eyed commentators have claimed. Third, it completely failed to surprise me that the administration wiped the floor with the dissident creditors in both private and public, given its vastly superior negotiating position. And finally, I personally found the whiny, martyred tone of the public pronouncements from said dissidents both morally and aesthetically repugnant.

Far from representing evidence that the Administration has set out sub rosa upon a course of stealthy expropriation, creeping socialism, or outright fascism, the final outcome in the Chrysler case simply represents the triumph of bare knuckled negotiation from a position of overwhelming strength, within the settled confines of existing law and practice. The government simply did what any hedge fund driven by fiduciary duty and self interest would have done if it held the reins: it dictated the terms it wanted to see, and it told the creditors to pound sand if they didn’t like it. The creditors, on the other hand, seemed to sally forth onto the field of battle without fully considering who was supplying their reinforcements (the Treasury), where they were fighting (in the forum of public opinion, as well as the arena of commerce), and the outside chance that their primary opponent might be smarter than a bag of hammers (and therefore realize and exploit its advantages). In return, they got schooled, but good.

I see little reason to give credence to those alarmists who see the Chrysler case setting a dangerous precedent. With the admittedly substantial exception of General Motors—whose existing creditors should be busy stocking up on Vaseline, ball gags, and Motrin—I cannot fathom why the government would want to get more broadly involved in corporate restructurings. The process causes massive amounts of brain damage, absolutely nobody likes the result—with the possible exception of the lunatic fringe on the left—and it sets up the Administration for all sorts of political pain in the future. There is absolutely no upside and tons of downside, which is a situation so anathema to politicians that most of them spend their entire careers dodging difficult decisions that would land them in such soup. Obama cannot be happy about it, unless he is an idiot or a nut. I will hazard an educated guess that he is neither.

If you think that felt good, that was just the foreplay. Go read the whole thing. Also, he references O Brother, Where Art Thou?, which means that Balloon Juicers have now been subjected to two references to that film today. Can we make it to three?

At any rate, you really have to read the crap the lenders were trying to pull, straight from the pages of the notoriously LIEberal Wall Street Journal:

Many of the lenders believed the administration wouldn’t let Chrysler file for bankruptcy. “The plan was to call the government’s bluff. The game was to game the government,” said a manager of a distressed-debt fund.

The lenders spent a week haggling over how to respond to Mr. Rattner. The big banks at first proposed the group offer to cut the debt in half and get no equity stake. That outraged some hedge funds and distressed-debt firms that didn’t face the banks’ broader concerns and that were accustomed to fighting in the trenches for their interests. The reply, sent April 20, reflected the hardening position of the hedge funds: The lenders would cut just $2.4 billion in debt, in exchange for 40% of Chrysler’s equity.

The offer landed with a thud. Rep. Peters said the lenders were seeking much more than market value for their debt, “which amounts to a taxpayer subsidy.” It was just 10 days until the government’s deadline to reach agreements with the UAW, Fiat and lenders if Chrysler was to get more government money.

They then turned down the government’s cash deal.

I have no idea where I got the picture. I saw it on a livejournal somewhere a while back and saved it and completely forgot to write down where it came from, so if you are responsible or know who is, let me know so I can give the appropriate credit.