Here’s a pic from my parents house, with my uncles dogs, my sisters dog, and Ginny and Guesly all paying a great deal of attention to my sister: 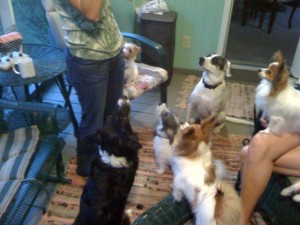 The paps are my aunt’s show dogs, the border collie is my uncle’s puppy, and the bigger dog is Huck, my sister’s pup. You all know who G & G are and who they belong to.

Previous Post: « Speaking of Mustaches
Next Post: Another Edition of Krugman is Probably Right But He Still Frustrates Me »