Good time at the BBQ- had lots of good eats, and Lily got to play some with some kids and another dog, and she is passed out on her doggy bed in the bedroom. His royal highness, however, apparently needs attention, and is stationed behind me bitching. Loudly. Continuously: 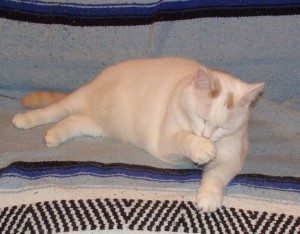 I love him anyway.