You are here: Home / Politics / Media / Too rich for my blood

No More Mister Nice Guy blog outlines what may well be the worst article ever to appear in the New York Times, an extended whine by Paul Sullivan about all the angry email he got for his piece “A Thousand Violins, Playing Just For the Rich People“. Here’s a sample:

“That’s so stupid that you ought to be slapped for it,” one woman wrote. My favorite began: “Bowties and Reaganomics are for losers. You can cry for the rich all you want, the rest of us will be happy to see them get taxed.”

The vehemence in these e-mail messages made me wonder why so many people were furious at those who had more than they did. And why are the rich shouldering the blame for a collective run of bad decision-making? After all, many of the rich got there through hard work. And plenty of not-so-rich people bought homes, cars and electronics they could not afford and then defaulted on the debt, contributing to the crash last year.

Sullivan goes on to suggest mass psychotherapy for everyone who didn’t like the piece, because, you see, if you don’t like reading about the travails of the ultra-wealthy, that means you have an unhealthy level of anger towards rich people.

Personally, I don’t resent rich people at all. Maybe I should, but I don’t. What I do resent is the New York Times wasting space discussing the economic “problems” of the rich when there are people out there who have real economic problems. I am not one of those people, by the grace of God, but you know the drill: 45 million without health insurance, 10% unemployment, wave after wave of foreclosures. Those are real economic problems. A 30% dip in your hundred million dollar trust fund is not.

If there were some terrible disease that was only affecting rich people and Paul Sullivan asked us to feel sorry for them, I would do so. In fact, I’m willing to admit right now that there may be all kinds of psychological problems that afflict the rich disproportionately and, if so, I have sympathy for those afflicted.

It’s one thing for Sullivan to write some sob piece about the rich because one of his editors told him to do so. That’s understandable. But when you write an entire column whining about the email you got and accusing your readers of psychological problems, you’re an asshole. It’s that simple.

There are days when I wish the New York Times would hurry up and go bankrupt.

I don’t normally like to make things this personal, but this picture of the reporter is worth at least a thousand words. 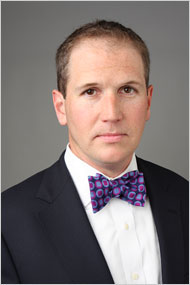