An effort to help the Republican Confederate Party celebrate Confederate History Month would be incomplete without noting how these folks tend to embrace violence as the preferred way to solve problems–especially when they feel that they are losing at the ballot box.

The Civil War started because the Confederates embraced violence as the best way to resolve a political dispute that they were losing.

Years before the traitors attacked Fort Sumter they had resorted to violence and domestic terrorism as a way to expand slavery to new US Territories. When settlers in Kansas were inclined to ban slavery, the pro-Slavery forces launched a campaign of terrorism and violence to try and win a victory they were losing at the ballot box.

In 1856, Massachusetts Senator Charles Sumner gave a “Crime against Kansas” speech on the Senate floor attacking the violence and calling for a repeal of laws like the Fugitive Slave Act. He named names in ways that would make David Broder faint if a elected official was so bold today in calling out political cowards and charlatans, but I digress.

It was an effective speech and so a pair of South Carolinian Congressmen reacted with violence as a first resort. Two days after the speech, Cong. Preston Brooks entered the Senate chamber with another Wingnut South Carolinian Member and beat the shit out Senator Sumner with a cane. Of course Brooks became a Confederate hero as did Laurence Keitt, his back-up in that attack. While Brooks beat Sumner, Keitt pulled out a pistol and threaten anybody who tried to stop it. The beating continued until Brooks broke his cane. Just a couple years later in 1858, Keitt was losing a discussion on the floor of the House and of course he resorted to violence. Lacking the votes, he started a brawl on the House floor that involved two dozen members.

In 1860 Keitt made clear what the coming Civil War was all about:

“The anti-slavery party contends that slavery is wrong in itself, and the Government is a consolidated national democracy. We of the South contend that slavery is right, and that this is a confederate Republic of sovereign States.”

This is what one ‘celebrates’ when one honors the fucking Confederacy, but again, I digress.

When the Confederates lost the Civil War they responded with violence. They assassinated the President. They started the KKK and began a campaign of organized terror and violence that is still active just below the surface.

Lynchings were common and so were riots–traditional American race riots–where gangs of white people killed people of color and destroyed everything they owned. These common forms of Confederate violence only came to an end in the Sixties (perhaps this is why they hate the DFH so much).

In the last forty years the Confederate Party has had to try and keep their propensity for violence in check. Of course it helped that they took over the Republican Party and did not have to be on the losing end of many political battles.

But there were some times when they were on the losing end or felt like power was slipping away. And when that happens they gin up the “Angry White Man” meme and let it rip.

This is what they did when Bill Clinton won. There was a lot of violence in that era and a rise in hate groups. It was just the Confederate Party letting loose their lunatic fringe. One can add the Oklahoma City bombing as just another tragic part of Confederate history. I guess it is fitting that we celebrate CHM in April.

During the Bush years the Republican Confederate Party kept their street violence in check as they had control of Government and could openly embrace torture and State sanction race bating, xenophobia and hippie punching. And of course in the Bush years resorting to violence as a first resort became our foreign policy.

In 2008 the party ended for these fuckers. And not only that, a black man became President. Once again these Confederate bastards are losing at the ballot box and once again the embrace of violence is coming front and center. As the SPLC has pointed out the number and coordination between hate groups is rising. Worst, the ideas of hate are cross pollinating between these groups and being pushed into the mainstream by Republican Confederate Party politicians, pundits and media celebrities.

It was not a surprise that the response to passing HCR was violence from bricks to spit, to verbal venom and death threats. This pattern will escalate as climate/energy legislation and immigration reform legislation is taken up. This will escalate as the 2010 election heats ups. As they face more defeats they will react with more violence of word and deed. It is all they know.

Many small attacks have been reported. Some people have been murdered. Mostly it is an escalation of the rhetoric of violence to justify, rationalize and excuse future violence that needs to be watched and called out. This has and will lead to more attacks.

Look at Joe Wilson face from last summer as he yelled at the President: 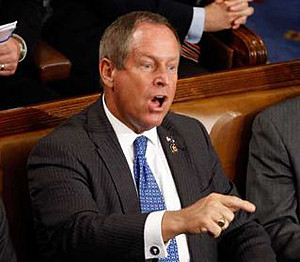 His anger, his rage was there for all to see. One can imagine the spirits of his fellow South Carolinian Congressmen Brooks and Keitt standing proudly at his side and Wilson wishing he could borrow a cane.

As always with these weasels it is the rhetoric of violence that comes first. The more a wingnut feels trapped the more violent the threats become. And soon ‘random’ attacks begins. These outbursts are rationalized away by Republican Confederate Party pundits and politicians as they try to surf the anger to political victories. More often that not they are unable to control the forces they unleash.

The best way to deal with these pricks is to beat them at the ballot box, to ridicule them and to call out the pundits and politicians who would justify the continued use of violence as a political tool. Silence in the face of these fuckers is not an option.