Many thanks to commentor Toast, whose link introduced me to the excellent Hyperbole and a Half blog…
__
__ 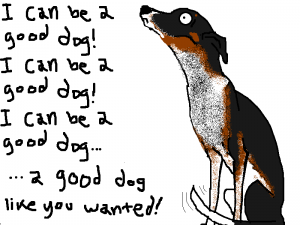 We live with the ten-pound version of This Dog. Sydney, goddess bless him, is actually quite a bright little guy, but he was not well treated in his first three (at least) homes. When he first came to live with us, he was terrified of new people, other dogs, cats, stuffed animals, chewies, passing trucks, suitcases, strange noises, the dark, unexpected smells, being left alone, being crowded, and probably a bunch of other stuff I’ve since forgotten. His only two identifiable skills were defecating at a dead run, and a cat-like ability for scaling the furniture which earned him the nickname Goat Boy. But it was his bug-eyed, tail-tucked, trembling desire to be a good dog, like you wanted! that broke our hearts… and kept me from killing him during the long, mop-intensive year it took to re-train him into decent dogly sanitation habits.

Allie Brosh is a comic genius, and obviously has a warm heart as well. I look forward to reading her entire blog, and possibly injuring myself by laughing too hard…
__