You are here: Home / Politics / Politicans / Black Jimmy Carter / The magic of cinema and how we got here

Racism may be as old as our species, but the dominant language and imagery of racism in our current America is relatively new–less than 100 years old. To understand the dog whistles of the teabaggers, conservatives, Republicans and wingnuts (four groups with almost zero distinction between them) one must pay attention to the movies and especially to the film that created the vocabulary, memes, frames and talking points that are the building blocks of these racist dog whistles. Of course I’m talking about The Birth of a Nation: 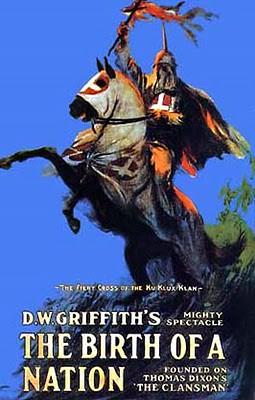 Racism is alive and well in America. The Republican Party and the Tea Party movement are using dog whistles to racism as an effective organizing tool in this election cycle. They are, of course, outraged if anybody notices and insulted if anybody who notices is so rude as to mention it and call them out. Hence the shit-spitting attacks at the NAACP in recent weeks. The overt racism of teabaggers Mark Williams and Andrew Breitbart are just the most well known examples. It is not surprising that both of these racists use the internets, twitter, social media and the latest technology to mobilize folks around their dog whistles and to push out to a gullible media a selective cut of information as facts that must be taken seriously.

Racism has always been an early adapter of new technologies–from the printing press to movies to radio to TV to the web to smart phones (racist may even be faster than pornographers)–the racists are quick to use new tools of manipulation. And so it is not a surprise that Williams, Breitbart and their camp followers are using all of the most modern technologies to deliver racist dog whistles to help Republicans win this November. And yes–I know–they will be outraged that I notice and indignant that I pointed it out, but that does not change what they are doing at all.

Racism is smoothly mixed with American pop culture. And in many ways we have D.W. Griffiths’ The Birth of a Nation to thank for that. One could do quite a few entries on this topic (and I expect that I will).

Consider the villain of the film. His name is Silas Lynch. He is a man of mixed race. In 2007 Time Magazine named Silas Lynch as number one villain in the history of cinema. Silas beat out everybody from Peter Lorrre’s pedophile in “M” to Hannibal Lecter to the Wicked Witch of the West. Silas Lynch was a bad mother fuc…[shut yer mouth].

And when it come to the Tea Party and the Republican Party, Barack Hussein Obama is  Silas Lynch. If you understand this pop culture reference then so much of the rhetoric, dog whistles, talking points and memes of wingnutopia make ‘sense’ in the context of their batshit crazy view of the world.

There is a lot to explore in the Obama is Silas Lynch wingnut meme, but film history blogger Paul J. Marasa at his site The Constant Viewer pretty much nailed the core wingnut belief when he wrote about The Birth of a Nation. Marasa writes about film as a daily diary dated from the start of cinema. His description of Lynch could be used by any average teabagger to describe their core problem with President Obama:

Lynch is portrayed as the ultimate villain because of his mixed race, presumably possessing the supposed superior intellect of the white man and the supposed cunning deceit of the black man. He is seen as the symbol of all that is morally wrong with Reconstruction. He lusts for power and will betray the trust of his white benefactors as soon as it suits him.

Obama is a race traitor and his supporters are fools. It is a simple message and it comes through loud and clear in the dog whistles of 2010.

I know that pointing this out is rude, but so it goes.

Still, everything that your average teabagger/conservative/Republican/wingnut knows to be true they learned from the movies–especially The Birth of A Nation.