You are here: Home / Organizing & Resistance / Fables Of The Reconstruction / The roots are deep

Thank the FSM it is September!

The intense stupid of August will soon begin to fade like a bad Boone’s Farm Apple Wine hangover. And it may have one bottle of Boone’s Farm too many that destroyed the brain cells of the cavalcade of fools marching to the dog-whistles of Beck, Palin and the other sirens of wingnutopia.

Of course the stupid of August will leave a residue. One clear sign is the “thoughtful” conversation about the Beck Scamfest of last weekend. There have been endless idiotic (and yet serious) words written about this sideshow, but one of the silliest was the column by Reihan Salam that E.D. had some fun with yesterday. In it, the very “serious” conservative-up-and-comer compared Beck to Malcolm X. That is just stupider than bathing in pig shit.

Still, the roots of the Beck rally go deep. There is a very long American tradition to wrap a movement dedicated to limiting the Liberty and Rights of others in patriotism and old time Christianesque rhetoric. There are many examples one could turn to, but Beck reminds me most of the Time Magazine cover boy from June 1924, Hiram Evans: 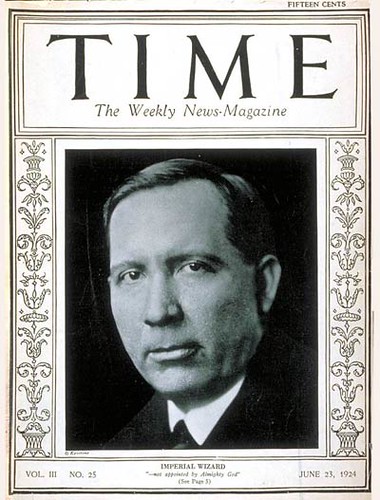 Or maybe he is just D.C. Stephens…

In 1922 Hiram Evans became the Imperial Wizard of the Ku Klux Klan. He led a movement that would see more than 6 million Americans join the KKK. In August (of course) of 1925 more than 40,000 Klansmen marched through the streets of Washington DC. While hatred of black folks was (and is) a strong motivator for the Klan and other neo-Confederate movements (like the Teabaggers) that is not a very great organizing tool. What worked for the Klan in the Twenties was fear of foreigners, immigrants and their weird Religions that were out to conquer and subjugate the United States.

Back then the main threat was from Catholics, then Jews, foreigners and (as always) African Americans. This passage from Wikipedia describing the 1920’s Klan could be about the Teabaggers, Fox, Beck and most of the current GOP if you replaced Catholic with Islamic:

The Klan’s Teabagger’s primary enemies were Catholics Muslims who the Klan Teabaggers feared were behind secret plots to overthrow the government and exterminate Protestants. Another important enemy was people of foreign birth, especially those from Catholic Islamic countries. A third, and lesser enemy, were blacks.

It was Evans who hit upon the bright idea to wrap the Klan in the American Flag and Jesus and market the group as a grassroots movement firmly rooted in traditional American values. Mobilizing around hate and efforts to restrict liberty are always easier when you evoke the blessings of a divine power and magical ancestors like Founding Fathers. It worked for the Confederacy, it worked for the Klan and it works for Beck.

Of course the comparison of Beck to Evans isn’t really fair–to Evans. Beck is really just a common grifter. A better comparison from the second Klan era to the Teabagger era might be between Beck and D.C. Stephens, who–back in the day–was the Grand Dragon of the Indiana KKK. Stephens was a real grifter. He backed Evans in a power play to take control of the Klan and was rewarded with contol of Indiana and 22 other states. It was a money making operation. Stephens took a cut of every dollar paid for hoods, robes and other tools of the Klan trade. In no time at all he was a millionaire and he used his influence with the gullible rubes flocking to join the KKK fad to elect certain candidates to office–candidates who would do his bidding. By the mid-Twenties almost all of the elected officials in Indiana owed their office to Stephens and the Klan.

Like Beck, D.C. Stephens was very powerful with the wingnuts of his era. And then he fell. Turns out that Stephens kidnapped and repeatedly rape a young women who then ate (or was fed) poison. As she got sick, Stephens refused to release her. After a few days he finally sent her home, but by then she only had days to live. Before she died she told her story and Stephens was arrested for murder. He thought his political pals would get his back, but instead they let him go down. Once in prison, Stephens spilled the beans on the grifters he helped to elect and they followed him to ruin. On the way down, he also helped to end the KKK fad of the Twenties. So at least he did some good.

Beck being compare to Malcolm X is just stupid. OTOH comparing Beck to an opportunistic grifters like Evans and Stephens seems just about right. The thing about Beck is that you know he is going to crash and burn, the entertainment factor is when and how. I think a goat, a penthouse and latex will be involve in his downfall. Time will tell, but if there is a FSM with a sense of justice (or humor) it will happen in August.

Now, I am certain that there will be some who think that comparing Beck to leaders of the Klan is “over the top”. Perhaps, but the tagline of the official website of “The Knights Party, USA” (a KKK effort) is “Bringing a Message of Hope and Deliverance to White Christian America!”

And that tag line could also have been the tag line for Beck’s rally.

Previous Post: « It Must Be Your Lucky Night
Next Post: Early Morning Open Thread: Squid-Cloud of Butt-Hurt »