I was discussing Kevin Drum’s post on falling crime rates in America and the old Freakonomics argument came up – that the only possible explanation for this phenomenon is the after-effects of Roe v. Wade. The fewer unwanted pregnancies, so the argument goes, the fewer potential criminals.

Interestingly, alongside falling crime rates, we also see lower teen pregnancy rates, lower rates of teen consumption of alcohol and drugs, lower violence in school, and a host of other “oh I guess the world isn’t ending” figures when we actually look at the data available.

However, whereas the abortion rate has leveled out, crime rates continue to go down. This may poke a hole in the Freakonomics argument. Then again, maybe that argument wasn’t all that great to begin with – though it was certainly controversial and contrarian.

First of all, there is probably no one reason that crime rates have fallen. This is a very complex issue, and I don’t think anybody can realistically say they’ve controlled for every other factor and voila! here is the answer to why crime is falling.

Second – what about video games? This thought just struck me today – but looking at these charts, crime has been steadily decreasing since 1990 – about the time when video games were going mainstream and video game consoles were becoming affordable for most Americans. Video game sales have increased steadily during this time period as well. You could draw a line in the very opposite direction as the lines in these charts, for instance, charting video game sales between 1990 and 2008: 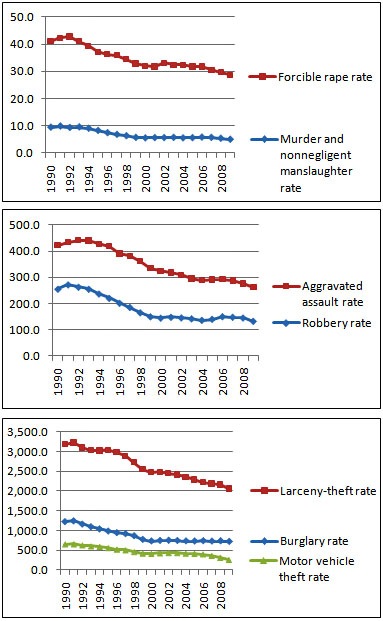 If anything, the fact that crime has been dropping for the past twenty years (along with things like teen pregnancy, etc. as I noted above) while more and more young people consume more and more video games should put a lie to the notion that video games actually increase crime and violence. I did a little googling and found this paper by Adam Thierer [pdf] which doesn’t exactly support the idea that more video game consumption has directly contributed to less crime, but certainly suggests that it’s a possibility.

One really fascinating bit from the paper is this excerpt from Killing Monsters: Why Children Need Fantasy, Super Heroes, and Make-Believe by Gerald Jones:

One of the functions of stories and games is to help children rehearse for what they’ll be in later life. Anthropologists and psychologists who study play, however, have shown that there are many other functions as well—one of which is to enable children to pretend to be just what they know they’ll never be. Exploring, in a safe and controlled context, what is impossible or too dangerous or forbidden to them is a crucial tool in accepting the limits of reality. Playing with rage is a valuable way to reduce its power. Being evil and destructive in imagination is a vital compensation for the wildness we all have to surrender on our way to being good people.

I think reading children’s literature is extremely important in the development of empathy in young people. You read about kids who are outsiders, who get picked on, who have to use their wits to get out of bad situations, and you learn a little bit more about what it means to be a human being. You learn what other people in your class might be going through – though with fewer wizards and dragons involved. Maybe playing video games or getting into these role-playing situations where you can be the villain, the monster, the criminal, or even the hero, the special-ops troop, and so forth is an important way to develop another kind of empathy – an empathy with the person we could be or would like to be, or at least to explore that part of ourselves that we will never become – maybe so that we never become it.

Or maybe video games are just very entertaining and relatively cheap – and fairly addictive. Maybe they’re just a good alternative to many worse things we could be doing with our time.

In any case, I think the idea that video games have led to a decrease in crime rates is at least as compelling as the abortion argument. Indeed, I think it’s quite a lot more compelling. But I think the question remains too complicated to boil down to any one neat and tidy explanation.