You are here: Home / Economics / Free Markets Solve Everything / How The Founding Fathers Taxed The Country (and/or I Would Seriously Have Ben Franklin’s Baby)

I’ve been too slow to post these last couple of days.  The Olberman fiasco is getting its dues, and I’ve nothing to add there.  DougJ and ABL have masterly handled the white bigot/self delusion-defeat theme, and so on.  Gotta be quick in this game.

So as we gird for the coming Wolverine v. Magneto duel with our putative tea swilling overlords, let me see if I can add something to the pot.  Nothing new, mind you, as my mind doesn’t always run that way, but something usefully old.

By way of back story (or throat-clearing) I’ve spent a lot of time over the last few years digging into odd doings in the seventeenth and eighteenth century. Mostly I’ve been concerned with Isaac Newton, and what you can learn about the scientific revolution as lived on the streets in the strange story of his life as a cop, in pursuit of a marvelously nasty scoundrel, a coiner named William Chaloner, who faked a fortune – roughly five million pounds in 21st century currency.

The Newton-Chaloner duel took place against the background of at the crucial moment when paper money appears as a real alternative to chunks of metal — and at which modern ideas about credit and finance first begin to take form.

Tracking that part of the story down, I kept tripping over Benjamin Franklin, well known as colonial America’s greatest scientist, of course — but who, it turns out, was also the most significant financial thinker of his place and time.

Franklin really got the concept of money.  He could write theory (or theoretical polemics);* he could make money – literally, as a hugely prolific printer of colonial paper he produced 2.5 million banknotes over thirty years of work; he invented some of the key anti-counterfeiting tools whose descendents are still in use today; and when the time came for revolution he, almost alone among the leaders of the insurrection,understood how they accomplished the seemingly impossible task of keeping an army in the field against a vastly richer and more powerful opponent.

Here’s the shorter:  in 1775, the Continental Congress authorized the first issue of Continental dollars. This was to be a true fiat currency, backed only by the faith and credit of the embryonic state. 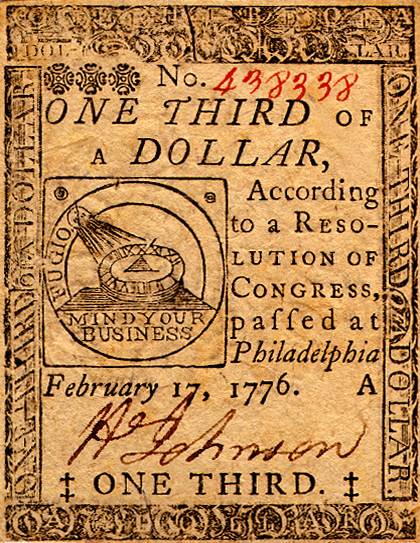 Franklin actually opposed this – arguing instead that the notes should either pay interest or be borrowed back in loans that promised some return. But he was overruled, and then, as he predicted, each run of the printing presses pushed the currency lower – down to one fifth of its value in just three years, and effectively to nothing by 1780.**

And indeed the whole is a Mistery even to the Politicians; how we have been able to continue a War four years without Money; & how we could pay with Paper that had no previously fix’d fund appropriated specifically to redeem it.

This great feat was done, Franklin explained, by masteful (if perhaps unconscious) manipulation of monetary policy:

This Currency as we manage it is a wonderful Machine. It performs its Office when we issue it; it pays & clothes Troops, & provides Victuals & Ammunition; and when we are oblig’d to issue a Quantity excessive, it pays itself off by depreciation. (Franklin to Samuel Cooper, April 22, 1779)

Franklin acknowledged the real cost to real people of what was, by the end, a true hyperinflation.  But, he said, in another letter, consider the results:

Wih this Paper, without Taxes for the first three Years, they fought & baffled one of the most powerful Nations of Europe. …

And yes,  people lost by it—or rather  people had to pay, one way or another, for what they collectively deemed important, securing their indepenence from Britain.  And, thus, Franklin argued, that “without taxes” line had to be rethought.  In fact, the Continental dollar’s fall should be understood…

…as a Tax, and perhaps the most equal of all Taxes, since it depreciated in the Hands of the Holders of the Money, and thereby taxed them in proportion to the Sums they hold and the Time they held it, which is generally in proportion to Mens Wealth. (Franklin to Thomas Ruston, October 9, 1780)

Which is to say that Benjamin Franklin, the greatest mind of the founding generation of the American experiment (yes, I rank him ahead of Jefferson), approved of sharply progressive taxation to pay for crucial functions of government.

More particularly:  Franklin understood and approved of the idea that the inflationary tax created by the collapse of the infant American dollar not just did but should hit the rich harder than the poor.

It made sense, he argued that these wealthy men should bear a proportionately greater share of the cost of the war, not just or even primarily because they had more scratch to spare, but because they had the most to gain from independence.

The connection from revolutionary times to ours is obvious, right?

If not: over the last decade we’ve fought two wars and transferred an enormous amount of capital from the middle class to the rich – and the wealthiest among us, have not been asked (or rather, have refused) to make any even remotely proportional contribution to the nation’s security and long term fiscal health.

Franklin would have been appalled.  He knew, as plenty do still, that achieving great common purpose takes cash and commitment from the whole damn society.  When the wealthiest opt out, take their stacks of coins and go home, they may protect their short-term interests – but they kill, however fast or slow, whatever hopes we may have of advancing to that “more perfect union” he and his first imagined.

Let me give the last word to old Ben himself, or rather to young Ben, just twenty-three, dealing some snark to the Koch bro. teabaggers of his day all the way back in 1729:

… as we all know there are among us several Gentlemen of acute Parts and profound Learning, who are very much against any Addition to our Money, it were to be wished that they would favour the Country with their Sentiments on this Head in Print; which, supported with Truth and good Reasoning, may probably be very convincing. And this is to be desired the rather, because many People knowing the Abilities of those Gentlemen to manage a good Cause, are apt to construe their Silence in This, as an Argument of a bad One. Had any Thing of that Kind ever yet appeared, perhaps I should not have given the Publick this Trouble: But as those ingenious Gentlemen have not yet (and I doubt never will) think it worth their Concern to enlighten the Minds of their erring Countrymen in this Particular, I think it would be highly commendable in very one of us, more fully to bend our Minds to the Study of What is the true Interest of PENNSYLVANIA; whereby we may be enabled, not only to reason pertinently with one another; but, if Occasion requires, to transmit Home such clear Representations, as must inevitably convince our Superiors of the Reasonableness and Integrity of our Designs.

[footnotes below the jump]

*If you’re interested, check out the least known of the American republic’s important founding documents, a pamphlet titled A Modest Enquiry into the Nature and Necessity of a Paper Currency. It was written in response to an economic crisis that threatened to take the Commonwealth of Pennsylvania down with it, and it is a masterly defense of paper money, of the role of the money supply in economic vitality or its lack, of the idea of financial policy at all.  Above all, it is a brutal, vicious, and delightful destruction of the venality, self-interest, and short-sighted greed of the richt:

The foregoing Paragraphs being well considered, we shall naturally be led to draw the following Conclusions with Regard to what Persons will probably be for or against Emitting a large Additional Sum of Paper Bills in this Province.…

… All those who are Possessors of large Sums of Money, and are disposed to purchase Land, which is attended with a great and sure Advantage in a growing Country as this is; I say, the Interest of all such Men will encline them to oppose a large Addition to our Money. Because their Wealth is now continually increasing by the large Interest they receive, which will enable them (if they can keep Land from rising) to purchase More some time hence than they can at present; and in the mean time all Trade being discouraged, not only those who borrow of them, but the Common People in general will be impoverished, and consequently obliged to sell More Land for less Money than they will do at present. And yet, after such Men are possessed of as much Land as they can purchase, it will then be their Interest to have Money made Plentiful, because that will immediately make Land rise in Value in their Hands. Now it ought not to be wondered at, if People from the Knowledge of a Man’s Interest do sometimes make a true Guess at his Designs; for, Interest, they say, will not Lie…..[and]

…All those who are any way Dependants on such Persons as are above mentioned, whether as holding Offices, as Tenants, or as Debtors, must at least appear to be against a large Addition; because if they do not, they must sensibly feel their present Interest hurt. And besides these, there are, doubtless, many well-meaning Gentlemen and Others, who, without any immediate private Interest of their own in View, are against making such an Addition, thro’ an Opinion they may have of the Honesty and sound Judgment of some of their Friends that oppose it (perhaps for the Ends aforesaid), without having given it any thorough Consideration themselves. And thus it is no Wonder if there is a powerful Party on that Side.

**The Continental (as the currency was known) had help on the way down.  In what’s probably the first instance of state-level financial warfare, Britain counterfeited Continentals in bulk – installing printing presses on warships in New York harbor, and producing dud notes in the home country and shipping them across the Atlantic.  The effort was successful enough to force Congress to withdraw a couple of issues from circulation, but even so, the primary driver of the hyperinflation was the relentless flow of the real articles.