I wrote yesterday of war in the abstract, of the sorrow to be read in the numbing, enormous tallies of weapons bought and sold.

Today, on Armistice Day/Veterans Day itself, it seems to me more appropriate to center on the individual experience of war that the day itself evokes. 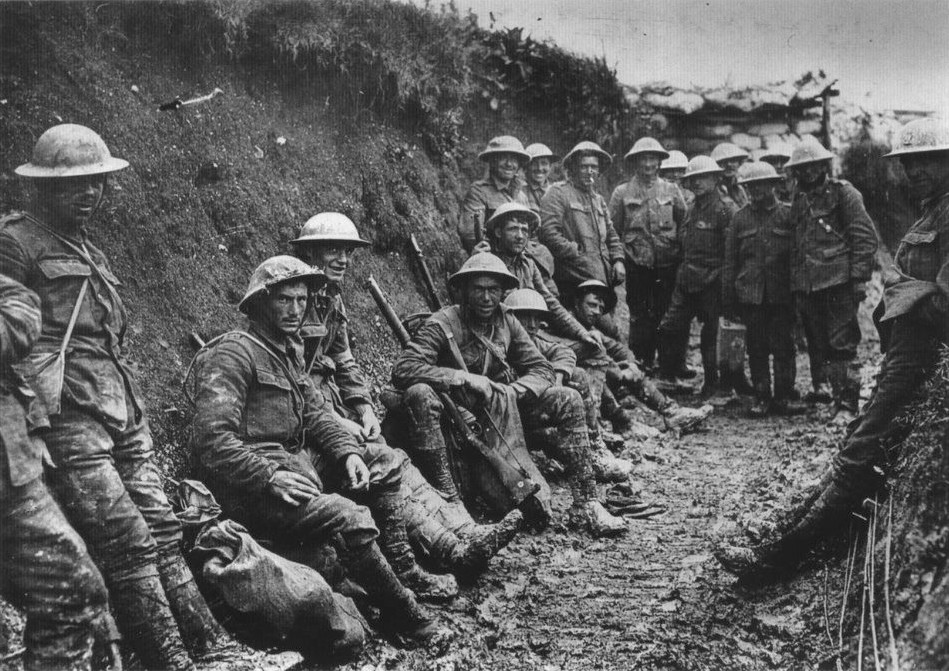 So, with apologies for republishing old material, here are a couple of stories from that eleventh hour of the eleventh day of the eleventh month from the year 1918 — the root of memory that we revisit today:

Those final six hours of the war were surreal.  The news of the cease-fire order passed swiftly down the line, but the fighting did not stop.  U.S. Army captain Harry Truman, commanding an artillery battery, fired under orders until 10:45 a.m.  British troops were ordered forward, with instructions to achieve their objectives by eleven.  German fire persisted too.  Among those killed were British soldiers wearing the Mons star, veterans of the first battle of the war.  Within the German lines, troops waited for news of the negotiations in the midst of preparations for a last battle.  Early that morning Georg Bucher went to his company commander to beg for more machine gun ammunition.   At 7:15, an attack came; Bucher’s machine guns broke it up before the Americans facing him reached his barbed wire.  His company’s casualties were light.  One new recruit went down with a chemical burn.  Bucher comforted him by telling him how much worse it could have been, how he could have lost his leg.  “The youngster seemed, God knew why, to find comfort in my words,” Bucher wrote. At that moment, Bucher’s company commander returned, leaping along like a mad man, shouting “Cease fire at eleven a.m..  Pass the word along, cease fire at eleven.”

Hearing that, Bucher wrote, “all we could think of was how to survive the next three hours.”  But within minutes, the neighboring  section of the line came under artillery fire, though Bucher knew the Americans across no-man’s land must have heard the news too.  Soldiers of proven courage began to waver, gathering their gear for flight.  At 10:30, the wounded newcomer cheered up, calling out the time left.  As he spoke, the allied artillery shifted aim, and began to shell Bucher’s position.  Gas came next, and “everyone cowered in the shelters with clenched hands.  The thought that death might overtake them a hundred times in that last half hour had completely unnerved them.”  The shelling died down, and the gas lifted.  Bucher and his company returned to the forward trench, grenades and rifles at the ready to repel any last charge.  At ten minutes to the hour, he stared over the parapet, watching the shell smoke drift in the breeze.  There was still just time for something to happen.  Time ticked on.  He stared at his watch.  The hand moved.  It was over.

Bucher’s experience was representative, but he did not experience the ultimate evil the war had to offer in those last hours and minutes.  There was one incident that captured the essence of war on the western front, the distillation of its arbitrary violence.

There was one incident that captured the essence of war on the western front, the distillation of its arbitrary violence.  At two minutes to eleven in the vicinity of Mons a Canadian private named George Price was hit by a sniper’s bullet.  He died instantly.  The man who killed him remains unknown.  That man made a choice.  He was a marksman, a skilled soldier.  He had just moments remaining in which it was legal for him to kill.  There was no need to fire, no purpose, and some risk at least to himself and any comrades near him.  If he waited until eleven, and then put his gun down, the only consequence would be that a young stranger would go home.   Instead, the shot rang out.  Two minutes ticked past.  The war ended.  George Price lay dead.

This passage comes from Einstein in Berlin, a book I published a few years ago.  Bucher told his tale in his memoir, In the Line, 1914-1918 published in England in 1932; Martin Gilbert wrote about the death of George Price in his one volume history, The First World War.

I’ve never served.  I’ve reported on one war, that parody of imperial ambitions in collision that was the Falklands conflict of 1982.  I say “reported” — but I was doing so from the safety and comfort of London, talking to Green Jackets in Whitehall and going for lunch with men who sold Rapier missiles to the armed services. No risk of dulce et decorum for me.

That little fight was memorialized in this, my favorite — if that’s the word — recent song to capture the pity and misery of war.
__

Wars are only little from the outside, of course.  A friend of mine lost her brother, a member of the SAS, in a quiet op on West Falkland.  I was with him on the farm to which he had long since retired from the Royal Artillery when my uncle learned that a brother officer had just been killed in Northern Ireland.  The son of a  member (when on this side of the water) of my synagogue died in the last days of perhaps the most pointless conflict in recent memory, the Israeli invasion of Lebanon in 2006.  I have thoughts of them in my heart right now. You, I’m sure, have yours.

Not to be forgotten — them, or this:

There are no small wars.

And with that, I’ll leave this as it stands, but for one last thought.  I think this is a subject and a day for memory, not for politics.

So without naming names, let me just say that when I recall George Price, shot down for…what? Fun? Because he was there?… I cringe every time I hear any valiant keyboard kommandos baying for wars they will not fight nor begin to imagine.

That is not OK.

Not today, not tomorrow, not ever.