You are here: Home / Civil Rights / Racial Justice / Kiss My Black Ass / With Friends Like Progressives, Who Needs Republicans?

I’m quickly moving past the “Holy shit, is this really happening?” phase to the “of course this is happening and you were stupid to think it wouldn’t happen” phase. The racism and stereotyping bullshit emanating from certain segments on*** the left is reaching a fevered pitch. I’m actually beginning to respect the Tea Party and their “Obama as a witch doctor with a bone in his nose” placards; at least they are honest and upfront about it.

It started off with a few oh-so-hilarious references to “Chocolate Carter” and “Mr. Presnint.” It moved on to “Dayum, I thought Obama was gonna be a gangster!” and “we elected a brother so he could bust some caps in whitey’s ass, not sell out to the man.” Now, the left is wholeheartedly embracing right-wing Rovian/Fox News race-baiting tactics:

My jaw literally dropped when I saw this. The “Progressive Change Campaign Committee,” an anti-Obama group ostensibly on the left founded by the notorious hypocrite Adam Green (who would love for you to move your money to community banks and credit unions but won’t do it for his organization), is running an ad. That Adam Green and PCCC have a vendetta against Barack Obama is not news. That they would put out an ad out essentially calling the President a coward isn’t even a surprise. No, the jaw-dropper was the open race baiting. After claiming that Republicans will cave on tax cuts if Obama just has the guts to make them, the ad switches to a screen with President Obama’s face, urging him to “keep [his] promise.” The President’s face is made extra black.

Here’s what I’m talking about. Below are three photographs of the President. One with a light background but in which he has what looks like same tie as in this ad (and his hair looks strikingly similar too, which makes me wonder if the image was lifted from that event – a campaign event in Flint, MI in 2008). The second is a screenshot of the PCCC ad. Finally, the last picture is what Obama looks like in pictures against a dark background and a wearing a dark suit. The PCCC depiction is in the center. Have a look:

As you can see neither the clothing, nor the setting, nor the dark background can be used as an excuse for blackening the President’s face the way that PCCC chose to do. This is not “simply what happens” when Obama speaks in front of a dark background or in a dark suit. Now, I can’t get into their heads and say for sure if PCCC was trying to be overtly racist or trying to simply put Obama in a bad light (literally) and didn’t care if that made his face darker which could have racial overtones. And it doesn’t matter. The act is this: they are taking the first African American president, and for theatrical effects, blackening him up some more. This kind of depiction is nothing short of racist. One would have to be blind to believe there is no Photoshop dark magic at work here, quite literally. This reminds me of Adam Green’s pal Jane Hamsher and her use of blackface. This is sick. This is disgusting. This is beyond belief and beyond words. For an organization that claims to represent the progressive mantle, this should be out of bounds.

There’s another interesting twist to this ad, beyond darkening Obama’s face as they did. I hadn’t caught onto that, until sherijr mentioned it in the comments. Not only did they put Obama against a dark background and darken his face, they also picked a clip of Republican Leader and Speaker-in-waiting John Boehner against a white background, actually making him look lighter than he usually does on TV. Here’s a split screen: 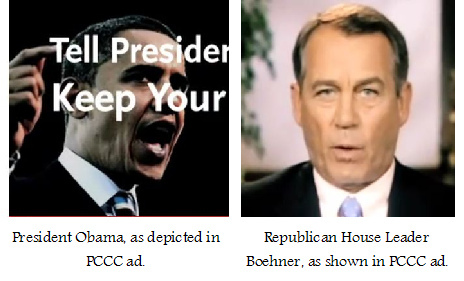 And here’s what sherijr had to say about it – and she said it better than I can:

I commented on how Obama was darker on a black background and Boehner was lighter on a white background. No doubt in my mind upon not just the initial viewing but several viewings- that they intentionally darkened him to set him up as that bad/failure black guy.1

Oh and by the way, can I just point out that the premise of the ad, that even Republicans like John Boehner would vote for a middle-class tax cuts if forced to turned out to be a false, ridiculous premise as well. You see, the House voted on extending the middle class tax cuts only (my opinion on that is that we should let all the Bush tax cuts expire if the GOP won’t compromise on the millionaire’s breaks), and John Boehner voted No. How is it possible that a group so sinister about President Obama’s motives simply takes John Boehner at his word? How is it possible that they don’t see that the GOP leadership has no qualms about holding the middle class tax cuts hostage to giveaways for millionaires? The answer: it’s not possible. They’re not stupid. This is intentional.

The PCCC and Adam Green have been slamming the President on damn nearly everything they can get their hands on. Green has gotten TV time to do the bashing personally. He and his organization has demonized the President, perpetuated the myth that Obama’s progressive reforms and accomplishments simply did not happen, and represented the worst in Left Puritanism, putting ideological rigidity way ahead of progress. But that the PCCC refused to recognize the progressive triumphs of the last two years is one thing. Now they are moving to full blown, open, racism, and they have the galls to ask people to donate money to put this ad on the air.

If any conservative group or a Republican had run this exact same segment in their ad with this exact same depiction of President Obama, the left blogosphere right now would be abuzz in the outrage against the racist overtones of such depiction. And so should we be when a group claiming to represent the left does it. Especially then. As a movement, progressives champion race-consciousness, and so in progressive discourse, there should never be any place for this kind of despicable garbage.

The honorable thing for the PCCC to do, if it wishes to make amends, would be to take the ad down, apologize to the progressive community, the African American community and the President, and donate every penny they raised to put this horrific ad on the air to the Southern Poverty Law Center or the NAACP. I doubt they will, however. Because I doubt they’re honorable. No honorable organization would put this out in their ad. Ever.

So, keep it up, y’all. Have fun primarying Obama with Kucinich or Feingold or whothefuckever; just don’t come crawling to colored folks when it becomes obvious that your Great Progressive Leaders have fucked it all up; are on the verge of ushering in the Age of [insert name of Republican jerkwad and please let it be Sarah Palin]; and you desperately need our votes and our donations. You won’t get a penny from me; not because I think Obama is the kitten’s paw, but because I’M SICK OF THE BULLSHIT FROM CERTAIN SEGMENTS OF THE LEFT.*** Instead of a productive discussion on how to get progressives out of this ditch, many of you are acting like a bunch of know-it-all asshats, and telling some of us who have opinions that it’s not our turn to speak yet.

If some of you would pull your heads out of your asses for just a minute, you might stop buying into the “Obama sucks and I haven’t gotten my unicorn” meme (which is being pushed by nearly every pundit and prominent blogger), and you might realize that you’re being played like a Stradivarius.

Here’s a poll to help you:

While some think President Obama’s “core” coalition “has been shattered,” here are some numbers from our latest NBC News-Wall Street Journal poll that looks at Obama’s approval among some of those “core” groups:

Or, if you prefer, you may continue your death march off the Cliffs of Insanity. It’s up to you.

1 I am reposting sherjr’s full comment because it’s indicative of our some of our my feelings on this issue:

I received the email from Adam Green a couple of days ago – with this ad linked and of course a request for donation to pay for it.. I commented over at bwd’s site immediately that this ad disgusted me, first because of the ignorance imo of once again going after the President instead of the effing republicans (what a freaking waste of $$). Secondly I commented on how Obama was darker on a black background and Boehner was lighter on a white background. No doubt in my mind upon not just the initial viewing but several viewings- that they intentionally darkened him to set him up as that bad/failure black guy. And it really turned my stomach how they gave Boehner a lightened/angelic depiction.

Then it became personal when someone posted on my Facebook to sign on to this ad and I responded that I would absolutely not support it and that I find it foolish and inept to attack the President when it is the republicans that need to be called out… after that I received several emails attacking me for not ‘pushing’ the president. Its like folks really don’t get or are seriously so fearful of the republicans that all they can do is cry to the President about everything. I am so sick of this crap all around, but from the left it is so ultra stupid. Needless to say I’ve blocked several people from my Facebook. And one other thing, I unsubscribed to Adam Green’s email list nearly a year ago.. and yet funny how I suddenly get his newest email with requests for $$.

Thank you for posting about this, because honestly I really thought I was the only person who saw the darkening of Obama- I’ve not read even one other comment about it until your posting here.


[via The People’s View]