You are here: Home / Politics / Religion / The Human Sacrifice Encouragement Act of 2011

There really isn’t any stopping the extremists in control of the Republican Confederate Party anymore. Every week and almost every day they can be counted upon for some new crazy in their never ending quest to move the Nation backwards as they pursue fantasies of a ‘better time’ that never existed.

These romanticized ‘Good Old Days’ were a time of clear and undisputed White Male Exceptionalism and everybody knew and accepted their roles in society. Rich white men were on top followed by other white men in order of their class. Woman knew their place and had power in any area where the fellas let them play. Foreigners, people of color, LGBT, etc. did not matter. And all of this was blessed by a specially constructed White Male God–a God who oddly enough always wanted to do what these White Males wanted to do–from buying and selling slaves, to child labor, to endless war, to predatory capitalism, to contempt for the poor, to control of women as birthing machines.

And it is hardly surprising that the 112th Congress is not only pursuing a White Male Exceptionalist agenda, but also claiming that each and every piece of Legislation is blessed by a version of a ‘divine’ God that they have carefully constructed in their own image. 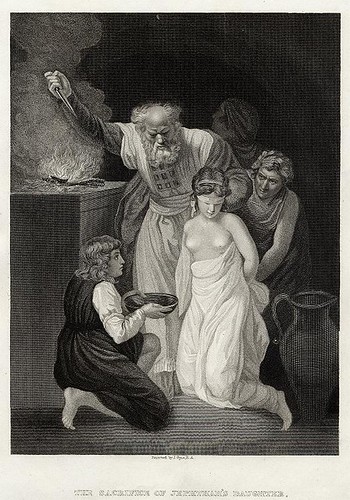 And so it is sadly predictable that they would introduce HR 358, The Human Sacrifice Encouragement Act of 2011.

It might be worth a moment to consider Jephthat, who could easily be the patron Saint of Wingnutopia. He was a bastard who grew to great power because of his violent nature. According to the myth (or the indisputable WORD OF THE LORD—if you prefer), Jephthat launched a war against his neighbors and promised his God a human sacrifice if he was victorious. His God blessed him with “great slaughter” and upon his return home Jephthat kept his promise to make the first person to greet him into an offering for his blood thirsty God. Turns out that person was his daughter, but a promise made is a debt unpaid and so he killed her. And his God continued to bless him with more blood. When some allies in his earlier slaughter asked for a bigger share of the plunder Jephthat marched against them and killed more than 42,000 Ephraimites—many lost their lives just because of their accent (Judges 12:5-6).

Like Jephthat, the wingnuts base their hate on superficial markers to define their enemies—language, custom, looks. Like Jephthat they have recently ‘won’ a victory and seek to offer their God a sacrifice. And not surprisingly they have also decided that women should have the dubious honor of dying to sate the blood-lust of their imagined God.

Last week they were trying to protect rapists. This week it is trying to ensure that women with medical complications forcing the hard choice of death or an abortion can be legally turn out into the streets to die. In short, it is a way to force these women to become human sacrifices just to appease the imagined desire for blood of the God they have created in their image as a reflection of their own hate, ignorance and fear.

As always, they give their Legislation an odd life-affirming title (the “Protect Life Act” in this case) that is at odds with the actual impact of the Bill were it to ever become law. The impact in this case will be that women will die—the law will guarantee it. But like Jephthat the Sponsors of the Legislation view the certainty of these deaths as just a sad by-product of keeping your promise to a vengeful God.

Perhaps some of these folks pushing this Legislation will share in the blessings of Jephthat. Perhaps a just God will see to it that it will be their daughters who get to die. And if the fetus or zygote dies with her, then they can pretend that their daughter was a virgin just like Jephthat’s daughter and celebrate her memory in the way that Jephthat’s daughter is remembered—by erasing her name and erasing her from history as anything other than a human sacrifice.

Perhaps a just God would make this happen, but in reality we all know that they will pay for their daughters to get an abortion in a private clinic if that procedure is needed to save their child’s life. You can be certain that as they draft this legislation they are reserving the role of human sacrifice for children of somebody else.

One wonders what new horrors the Republican Confederate Party members of the 112th Congress will come up with next week.

In a tip to Tom L. the art is: “The Sacrifice of Jephthah’s Daughter” engraved by J.Opie, published in The Pictorial History of the Bible, 1834. Steel engraving.