You are here: Home / Humorous / Deadliest Snatch: The Daily Show on Race and Abortion

JON STEWART OPENING : In the battle over abortion and women’s productive rights, pro-life groups have opened up a new front.

RICK SANTORUM (1/24/2011): For the first, well, more than 100 years in this country, when we denied personhood to human life, in the form of black people in America… now, the Supreme Court, 100 years later in 1973… they’re going to say that this group of people, human life in the womb, is going to be denied personhood.

JON STEWART OPENING: Yes, oddly enough, the pro-life movement is using the black community to make their point, equating abortion with slavery. And… throwing in a little bit of the genocide for good measure. Eh, you gotta watch it.

SEAN HANNITY: They say black women abort their children at 5 times the rate of whites in America.

RICK SANTORUM: The black population should be almost double what it is today.

JON STEWART: The new pro-life campaign touches on both of your areas of expertise obviously, so I wanted to get both your spins on this. Larry, why don’t you start?

LARRY WILMORE: Sure, Jon. Oh, white people, I am so sorry. I had no idea that black people get 5 times more abortions than white people. I mean, I know we already kick your ass in sports and music, but… we’re dominating in that area as well? Hey, you can have abortion back, we’ll get good at math. Watch your back, Asians!

STEWART: I’m sorry, Kristen, you… are you OK? You seem upset. Are you upset by this?

KRISTEN SCHAAL: I… I don’t want to be a slaveowner. I didn’t realize that being pro-choice meant perpetrating slavery. I mean, forget about abortion, I mean, what about pregnancy? That’s keeping a fetus captive for 9 months in our middle passage, sloshing back and forth in the 100-degree heat, chained to an umbilical cord like an animal! It’s so inhumane!

STEWART: But… I don’t know if they mean it metaphorically, women obviously are not slave ships. I mean, don’t we have to balance the competing interests of the mother and the fetus? Is that…?

SCHAAL: Well, all I know is that on the next Census, I’m declaring all 300,000 of my eggs as whole people. And I’m going to give them reparations!

WILMORE: Great, even your ovaries get reparations before I do. Look, listen, I know these guys want to make a point, but you don’t do it by appropriating the worst thing that happened to other people. Equating anything you don’t like to slavery trivializes centuries of suffering. It’s like the Holocaust of analogies.

STEWART: (stunned pause) This campaign isn’t really just about slavery, it also reaches out to African-Americans in other controversial ways. Take a look at this.

AP (2/24/2011): This massive billboard standing tall over a busy street reads, “The most dangerous place for an African-American is in the womb.” 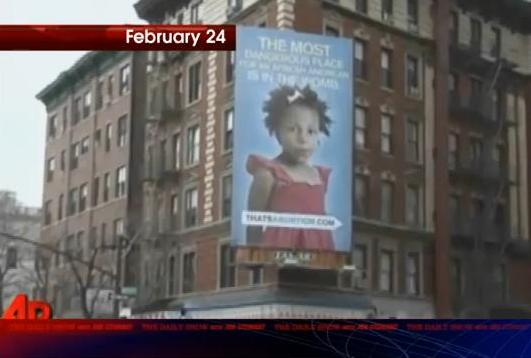 WILMORE: Come on, Jon, the womb is the most dangerous place for black people? At the most, it’s 17th, behind the Magic Johnson Theater at the premiere of a Big Momma movie.

SCHAAL: Yeah, Jon, 17th. We did the research, didn’t we Larry?, for a new show we just filmed for the Discovery Channel. 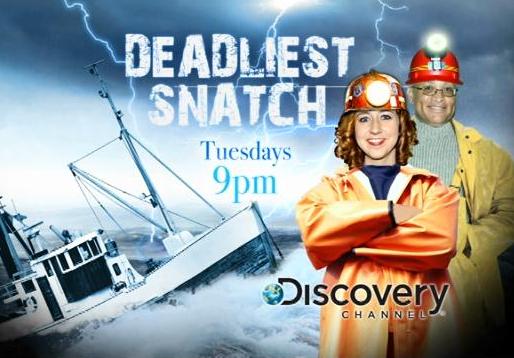 STEWART: What’s….? Can I ask, and again, I’m not an ad executive, but why is there a fishing boat in the promo?

SCHAAL: Oh, you’d rather if it was a giant picture of a gaping vagina?

SCHAAL: I fought for that.

WILMORE: Well, Jon, if politicians are so concerned about what’s killing black people, how about curing diabetes or sickle cell? Or ban something that kills us on the inside: Tyler Perry’s House of Pain.

SCHAAL: And speaking for women, those politicians should stay the hell out of our wombs.

STEWART: Oh, is that because for you, abortion is a private matter?

SCHAAL: No, because it’s not safe in there! Weren’t you listening? Deadliest Snatch!

STEWART: Please don’t… please don’t show the poster again, if that’s…. But isn’t there a valid point though to be made about, shouldn’t we work to reduce the number of abortions? Especially in the black community, or really, any community.

WILMORE: Yeah, I get their point, Jon. We need to make more black babies. And if black women’s vaginas are as dangerous as they say, I know what we have to do now.

SCHAAL: You know, if it’s interracial, it counts as black!

SCHAAL: I thought… well, I thought this was just a bit.

WILMORE: Kristen, no, remember? We were in the Deadliest Snatch, I said if we ever get out, you would owe me one.

WILMORE: Jon, not now, not now. C’mon Kristen, think how adorable they are.

(online video cuts off here, what follows did air on TV)

WILMORE: Jon, can we use this right here? (points at desk)

(h/t BruinKid for the transcript)