You are here: Home / Politics / Republican Stupidity / Why Do Republicans Hate America So? — Nuclear Nonchalanting Edition

Update: Oh damn. For those in peril….

So, as reported in today’s New York Times, here’s Mitch McConnell talking trash about how Real Americans™ deal with their neutrons:

“My thought about it is, we ought not to make American and domestic policy based upon an event that happened in Japan,” Mr. McConnell said.

Which, as I read it, suggests that right thinking folk take their disasters straight upside the head before attempting to learn anything from the experience. 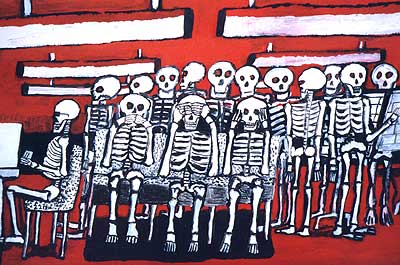 What makes that way of thinking even more risible (if it weren’t so thoroughly tragic, of course) is that elements of the nuclear crisis developing in Japan right now were at least partly made in America.  As the Times also reported in a different article,  the Fukushima reactors were designed by General Electric, and we currently possess a sizable number of plants using the same approach to power generation.  Not a problem for McConnell, it seems, but Congressman Ed Markey sees it differently:

He said regulators should consider a moratorium on locating nuclear plants in seismically active areas, require stronger containment vessels in earthquake-prone regions and thoroughly review the 31 plants in the United States that use similar technology to the crippled Japanese reactors. “The unfolding disaster in Japan must produce a seismic shift in how we address nuclear safety here in America,” Mr. Markey said.

I don’t think much of Markey’s choice of words in that last line (tone deaf is the best that can be said for it).  But I got no problem with the idea of thinking twice before siting more nukes along faults and taking a look at potentially problematic reactors.  Still, even that, apparently, is too much of a genuflection to the train of events in Japan and that known liberal proclivity for prophylaxis for Senator McConnell to swallow.

And that’s O.K.  —  because we know that earthquakes know better than to f*ck with the US of A; that publicly traded companies facing increasingly expensive maintenance demands on aging nuclear power plants will never cut a corner; and that bad stuff only happens to bad places, which, by definition lets out  this exceptional nation most of us call home. Right?

Ratchet down the snark, and the sheer awfulness of McConnell’s statement actually deepens.  This is the “We make our own reality” mentality in action.  We need learn nothing from experience; we need pay no attention to what some folks talking strange languages might know; when we play roulette it’s OK — if you are a Republican it always comes up red.

That isn’t governance; that isn’t leadership.

It’s what little kids do when the world becomes too much.  But the minority leader of the US Senate is supposed to have gotten past tucking up tight in his quilt, eyes closed, pillow firmly over his head to bar entry to any discomforting hint of a reality that fails to conform to his aggrieved sense of what ought to be.

And in this case, I just can’t see how to read McConnell’s position as anything other than saying we gotta sit and wait for our own nuclear disaster — and then pay in our own blood and treasure — before we can even begin to see if we have a problem.

Which begs the questions:  Why does Mitch McConnell hate his fellow citizens so?

Consider this one more episode in the Factio Grandaeva Delenda Est chronicles.