You are here: Home / Open Threads / Excellent Links / Prom Night In The Cosmos/My High School Wasn’t Like This

A bit of (not exactly) random beauty — and a lovely story parsecs from politics — for your morning pleasure: 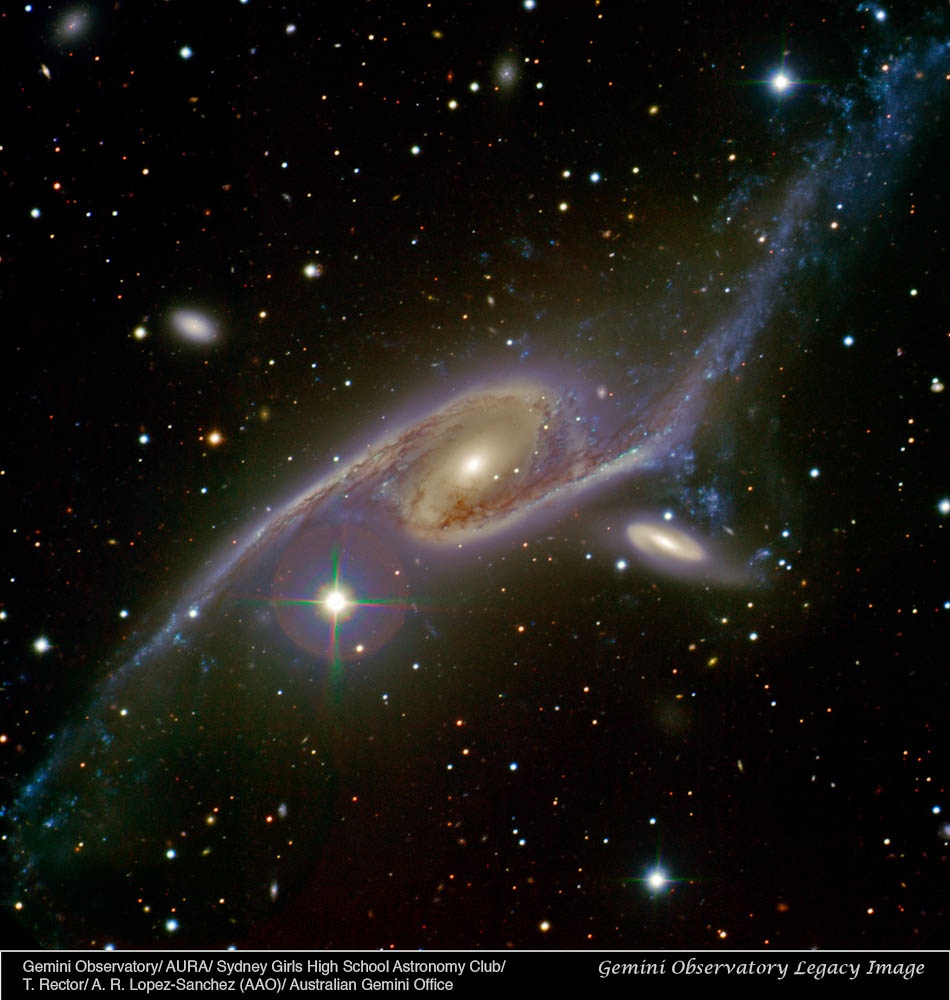 The story:  This image is the winner in the second annual contest the Gemini Observatory runs for Australian high school students, in which teams identify objects in the night sky that could yield images of both scientific interest and sheer gorgeousness.  The students have to submit an essay defending their choice of object, and this year’s winners, five young women from the Sydney Girls High School, proposed taking a picture of a system of colliding galaxies* with the following scientific rationale:

“If enough colour data is obtained in the image it may reveal easily accessible information about the different populations of stars, star formation, relative rate of star formation due to the interaction, and the extent of dust and gas present in these galaxies.”

As the Gemini press release went on to report, the team also argued for, in essence, the transformative value of the art that inheres in great works of science:

When viewers consider this image “in contrast to their daily life,” the team explained, “there is a significant possibility of a new awareness or perception of the age and scale of the universe, and their part in it.”

The data for this image were gathered by the Gemini South telescope — an eight meter monolithic mirror telescope of exceptional optical quality — using one of its primary instruments, a multi-object spectrograph in its imaging mode, as the camera.

As for the analysis of what we are actually seeing above, the Gemini press office writes:

The primary galaxy in the image (NGC 6872) exemplifies what happens when galaxies interact and their original structure and form is distorted. When galaxies like these grapple with each other, gravity tugs at their structures, catapulting spiral arms out to enormous distances. In NGC 6872, the arms have been stretched out to span hundreds of thousands of light-years—many times further than the spiral arms of our own Milky Way galaxy. Over hundreds of millions of years, NGC 6872’s arms will fall back toward the central part of the galaxy, and the companion galaxy (IC 4970) will eventually be merged into NGC 6872. The coalescence of galaxies often leads to a burst of new star formation. Already, the blue light of recently created star clusters dot the outer reaches of NGC 6872’s elongated arms. Dark fingers of dust and gas along the arms soak up the visible light. That dust and gas is the raw material out of which future generations of stars could be born.

So who cares if our current politics is a social-engineering test-to-destruction experiment?  In galaxies far, far, away, they’re getting ready to restart the tape and try again.

You may consider this a cosmic open thread.

*For more images of colliding galaxies — surely some of the coolest objects in the sky — check out this collection of Hubble images.