You are here: Home / Past Elections / Election 2012 / Grifters will always find each other… 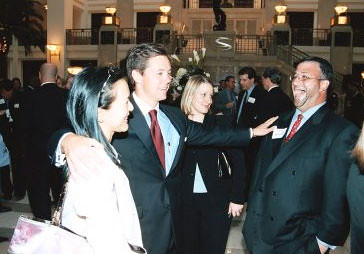 Back in 1999 I started to research Jack Abramoff and his web of corruption. I was on to the scandal years before it broke and shared details of my research with journalist, authors, filmmakers and others. Quite a bit of this work was shared before the scandal broke in 2004 and more was shared in the years since. In 2004 I started to write about my Abramoff research over at Dkos and the 280 plus Diaries with an “Abramoff” tag can be reviewed here.

Since the early 1980s Jack Abramoff was part of a troika of grifters. For decades these three scoundrels have polluted, harmed and infected American politics. Of the three, Abramoff is easily the one with the most integrity. This might seem hard to do until you realize that Jack’s partners in crime were Ralph Reed and Grover Norquist.

Unlike Jack, Reed and Norquist are still very powerful players in wingnutopia. Grover is the think tank guy and his front group, Americans for Tax Reform, has become a very effective way to shakedown Republican candidates and office holders. If Grover said it was a “tax” it was and if he said it wasn’t well then it wasn’t. Folks pay to keep on his good side and pay another price if they cross him. Since McCain made his deal with Grover for Presidential support in 2008, nobody on the right will stand up to the little grifter.

As bad as Grover is, it is Ralph Reed who is easily the most odious of the group. Reed’s schtick is an old school con–he is a Christian grifter and he is very good at his life’s work. When Abramoff needed help, it was Reed who convinced gullible Christians to defend Jack’s clients as they profited from sweatshops, forced prostitution, forced abortions, gambling and other things that make Jesus weep. Ralph knew how to get some fools to embrace almost anything as a “Christian Value” and was more than happy to run the con if the money was right. Reed was so corrupt that Abramoff one marveled at his shamelessness and greed. In a 2002 email exchange with Mike Scanlon (a convected Abramoff co-consprirator) Jack wrote that Reed was a “bad version” of them.

As the Abramoff scandal broke both Reed and Norquist had some close calls, but now they are back on top. Ralph continues to run the Christian grifter scam and present himself as a “gatekeeper” for the votes of these “born again” folks who Ralph plays like they were born yesterday. Ralph is holding debates for Republican Confederate Party candidates and organizing the rubes in early primary states. Ralph has been building his con into a package to sell to the highest bidder and it looks like he has found his mark in a grifter from the big city.

Word leaked out over the weekend that Donald Trump has interviewed Ralph Reed for the job as his campaign manager as the hair piece plans a run for the White House. It is a grifter match made in the bowels of hell–and almost perfect in its contempt for voters and America.

And Reed is already fluffing the Donald. In an statement to Christian Broadcast Network, Reed said:

“There is a nascent and growing curiosity in the faith community about Trump. Evangelicals will like his pro-life and pro-marriage stances, combined with his business record and high-wattage celebrity all but guarantee he will get a close look from social conservatives as well as other Republican primary voters.”

Sounds like Reed is already helping Trump run the hustle.

Someday we may have a corruption scandal where all the guilty folks go to jail, the truth is exposed and real lessons are learn. So far it has never happened. The Abramoff scandal is no exception. Most of the guilty went free and are still running the same old scams. The damage continues.

Reed and Norquist can always be easily bought by folks with money and a desire to embrace the endless con. The boys have decades of dirty tricks between them and there is almost nothing they will not do for money. Trump could not buy two better operatives if he is serious about running for President. And if he is not serious, he could not find two more willing grifters to help the Donald fleeces the rubes for more of their hard earned cash. Grifters will always find each other, the con never ends and there is a sucker born (again) every minute.