You are here: Home / Organizing & Resistance / Fables Of The Reconstruction / The “Great White Hope” Republican primary. 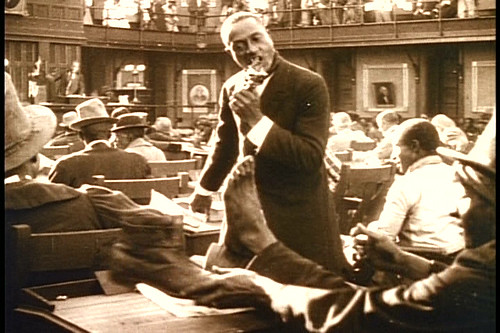 In the run for the White House there are always the “Primaries” before the first official Caucuses and Primaries. There is the “Money Primary”, the “DC Beltway Insider Primary”, the “Press Primary”, etc., etc.

The different Parties also have unofficial “Primaries” to build support with key voting blocks. In 2008 Democratic candidates worked hard to win the Netroots, Unions, Environmentalists and the various other groups that make up the “Base” of the Party. Now it is the Republican’s turn.

At this stage in the election cycle, announce, unannounced and poser Republican candidates are trying to win the traditional “unofficial GOP Primaries” by pandering to Right-wing Christians, Glibertain fan boys, deep pocketed Oligarchs, TeaBaggers and the like. And ever since the Neo-Confederates began to take over the Republican Party in the 1960s all GOP Presidential candidates have also taken part in a shadow Primary to appeal to white supremacists. Mostly this GOP “Whites Only” primary has been conducted with codes words, plausible deniability and dirty tricks in the shadows of American politics. Not anymore.

Since a black man was elected President in 2008 the active catering to racism, white fear and appeals to white supremacy have moved more and more into the open. Republicans of almost every stripe has become trapped in cycles of more and more extreme rhetoric. From time to time the racism and fear just explodes. It was a major factor in the 2010 midterms and proved to be the most effective organizing tool the Modern Conservative movement had in their bag of tricks. White anxiety and the fear of a brown planet has led many a fool to join the Tea Party and vote Republican. It has also attracted many grifters to exploit these very gullible people.

And that brings us to Donald Trump.

He may or may not be a racist, but that hardly matters. He is a grifter who uses racism for profit. He exploits the fear of a brown planet and whites becoming a powerless minority. To save the white race, Trump offers himself up as “The Great White Hope”. It is a powerful appeal to fear, racism and the desire for control.

More than any other recent Republican candidate (or pretend Republican candidate), The Donald has brought the racism of the GOP’s “Whites Only” pre-primary into the light of day. It is stunning to watch folks try to push it back into the shadows, but Trump will not let it go. He is forcing the rest of the Republican Party to actively compete with him in a “The Great White Hope” primary. He is pushing the effort to win the support of white racists into the open and making appeals to racism a Republican litmus test.

Trump has added a new unofficial “Primary” on the road to the Republican Presidential Nomination: The “Who can save us from that uppity nigger” primary.

He should be condemned, but it will not happen. Instead he will laugh all the way to the bank. And on the way the rest of Wingnutopia will embrace this racist bullshit even more.

It has been ugly, but it will get worse.

ps: The image is from D.W. Griffith’s extremely racist film, “The Birth of a Nation”. It is from a scene showing how the Confederate Party viewed African Americans as elected officials. It is pretty vile stuff and yet the view of Black folks with power (or even equality) held by Griffith is not that far from the view of President Obama held by many folks who are the “Base” of the GOP. Pandering to these assholes for their votes is what Trump is all about–and the same could be said about almost every other Republican candidate. I’m sure there are exceptions, but I just can’t think of one at the moment.