You are here: Home / Past Elections / Election 2012 / Laugh, clowns, at your broken loves 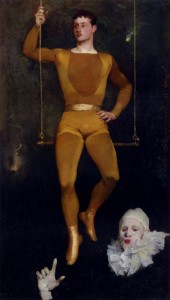 There is far too much risk that I might accidentally be exposed to something written by David Brooks, at which point I would have to poke out my own eyes with a pair of chopsticks to save my sanity. At 92, I need to hang on to as many of my senses as I have left. As I noted on a thread the other day, when I was younger and had fortified myself with a good dose of anti-psychotics, I once tried writing a detailed critique of one of Brooks’ articles, only to end up with a page with the words “David Brooks is a dickhead” scribbled one hundred times.* Ever since then, I have limited myself to writing nasty stories about him being humiliated by old ladies and then posting links to them on his Facebook Wall.

Anyway, yesterday evening I was searching for shirtless photos of Aaron Schock – I know it’s wrong, but I have a weakness for men who look like they’d cry for their mommy during sex – and must have clicked on the wrong link.

On its Room for Debate page, to which Mistermix has already referred, the Times has collected together a team of crack political analysts (assuming that by “crack” one means the wide space between the top of a plumber’s shorts and the bottom of his shirt) to debate the question “Who’s Missing From the G.O.P. Race?“.

Surprisingly, the answer is apparently not “Everyone with an IQ over 4 and Sarah Palin”.

Linda Chavez (whose article is wonderfully entitled “Big Egos Need Not Apply”) distinguishes herself by noting that:

The G.O.P. has a deeper bench than the Democrats…

follows it up with the suggestion that:

the Democrats are going to have a tough time with Hispanic voters, who may choose to stay home on Election Day.

and then plumps for John #notintendedtobeafactualstatement Kyl, who would surely have the brown people and the womens lining up twelve deep to vote for him.

6) And if nominated, he could save Republicans the expense of buying new bumper stickers by picking Elizabeth Cheney as his running mate.

and even says that:

4) His presence in the race would also force an overdue Republican reckoning with his brother’s legacy. If Republicans really want to repudiate George W. Bush as a big-government conservative, rejection of Jeb Bush would allow them to do so definitively.

Nevertheless, you can feel the hope for eight more years of Bush oozing out of Ramesh like flop-sweat out of Rush Limbaugh’s back at a Snoop Dogg concert.

Fergus Cullen, aware enough to notice that the GOP has little chance of winning with the pack of whackaloons, assholes and magic underpants wearers who have currently thrown their tinfoil-hats into the ring, pines for “A Mainstream Alternative”. One of his choices is Mitch Daniels, which suggests that by “mainstream alternative” Fergus simply means “doesn’t dribble on himself that much when he speaks”.

John J. Pitney Jr and Dan Schnur each disappoint by actually making sense for whole sentences at a time, concluding that only a fucking idiot would choose to enter the race at this point anyway.

My favorite though is Peter Wehner, who inserts his tongue lightly into Mitch Daniels:

… recently delivered the best speech any major G.O.P. figure has given in years.

– frankly a pretty low bar – but then gets so excited about Paul Ryan I expect Petey had to Windex his computer keyboard afterwards:

He’s the author of the most impressive conservative governing blueprint in decades, and maybe ever … offered a comprehensive, wise and politically courageous answer … rock-solid … extremely popular … excels in his style and public discourse … philosophically well-grounded, a passionate and scrappy advocate for his views … eschews dishonest and ugly rhetoric …. personally modest and unpretentious rather than arrogant and morally preening. Paul Ryan, in other words, is the antithesis of Barack Obama.

* A fond shout-out to JGabriel, who noted that writing out “David Brooks is a dickhead” 100 times is actually surprisingly entertaining.