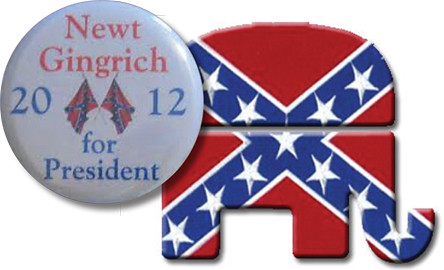 Folks wonder how Newt plans to build a base for his run for the White House. After all, he has a thirty-plus year record as a complete fuck-up to deal with–but to be fair that record has been sold with word strings clever enough to fool the pundit class into thinking they are rooted in ideas. Still, support from his Beltway pals would never put Newt over the top.

What might help is catering to White anxiety and fear over a changing world–this is especially true for white males. Racism has a role to play in this, but one can make blatant appeals to this fear without being personally racist. Gingrich is building his campaign on making these appeals to fear–and in doing so he will come to the line of racist rhetoric. And from time to time he will cross over it. But that will be OK for Newt because he is a Republican.

Take his statement in the opening days of his campaign. In a speech back down in Georgia, he expressed his Republican Confederate Party credentials by telling a White Southern audience that:

Newt is bonding with his audience by letting them know that he agrees that the threat posed by Barack Obama is just as bad as the threat posed by that Black Republican, Abraham Lincoln 150 years ago. And there may be some truth to this fear if your concern is to preserve White Supremacy. Exploiting that fear is what Newt’s code talking campaign is all about.

Newt also brought out the lazy young bucks on food stamps meme of his early years in Congress with this bit:

And for good measure he called for the return of the literacy test that needs to be passed before you could vote:

What could possibly go wrong if Americans had to pass a history test designed and administered by wingnuts before they could vote? Boy oh boy, that Newt is just full of ideas straight out of the Jim Crow handbook.

And that’s no surprise because Newt is a code talker. He has been doing this “politics of grievance” shit for 40 years. There has never been a base for his policies, his Party or for him, but there a lot of white folks in America who can be scared, fooled and enraged–and if you put enough of a scare in ’em these white folks will do almost anything. There may even be enough of them voting in the GOP primary to give Newt the nomination if he can mobilize this White Fear into his base. And judging from the opening days of his campaign, that looks exactly like what “The Professor” has planned.

He was lightly called out on this strategy today when he was on Meet the Press. David Gregory played the “Food Stamp President” quote and asked Newt:

MR. GREGORY: First of all, you gave a speech in Georgia with language a lot of people think could be coded racially-tinged language, calling the president, the first black president, a food stamp president.

Newt–of course–took offense and played the white victim card in a response that kept the code talking front and center (extra points for spotting them):

REP. GINGRICH: That’s, that’s bizarre. That–this kind of automatic reference to racism, this is the president of the United States. The president of the United States has to be held accountable. Now, the idea that–and what I said is factually true. Forty-seven million Americans are on food stamps. One out of every six Americans is on food stamps. And to hide behind the charge of racism? I have–I have never said anything about President Obama which is racist.

MR. GREGORY: Well, what did you mean?

REP. GINGRICH: Well, it’s very simple. He has policies–and I used a very direct analogy. He follows the same destructive political model that destroyed the city of Detroit. I follow the model that Rick Perry and others have used to create more jobs in Texas. You know, Texas two out of the last four years created more jobs than the other 49 states combined. I’m suggesting we know how to create jobs. Ronald Reagan did it. I was part of that. We know how to create jobs. We did it when I was speaker. And, and the way you create jobs is you have lower taxes, you have less regulation, you have litigation reform. When the New York Stock Exchange puts its headquarters at Amsterdam, Holland and, by the way, follows 40 other companies in the last year; when General Electric pays zero in taxes; there’s something fundamentally wrong with the current system. The Obama system of the National Labor Relations Board basically breaking the law to try to punish Boeing and to threaten every right-to-work state. The Environmental Protection Agency trying to control the entire American economy by bureaucratic fiat. The Obama system’s going to lead us down the path to Detroit and destruction. I think we need a brand-new path. It’s a path of job creation. And one of the central themes of this campaign is going to be paychecks vs. food stamps.

Newt Gingrich may or may not be a racist, but he is doubling down on the code-talking and has promised to make if the theme of his campaign. But I doubt Newt is a real White Supremacist because he is first and foremost a grifter–and a grifter doesn’t really believe anything. He will say whatever helps him to con the mark. And for “The Professor” the marks are are white voters fearful of a changing world. Newt will give them people to blame, fear and hate for change with the hope that he can ride their wave of rage all the way to the White House.

Newt’s not crazy. Mobilizing White fear is a potent and sometimes deadly political tool. It had proven to be a well worn and successful political path over the last 150 years of American History. In 2012, whomever does the best job of mobilizing White fear will become the Republican Confederate Party candidate for President. Newt knows that winning the White Supremacy Primary is the key to the nomination. When wingnuts ask themselves “who can save us from that nigger?”, Newt is betting that they’ll think of him in the voting booth.

And his Beltway media pals will sell his campaign as being “intellectually seriousness”.

Previous Post: « More of This, Please: Doghouse Riley
Next Post: Because I can – Wingnut polls and more music Open Thread »