You are here: Home / Happy Christmas from Ron and Nancy 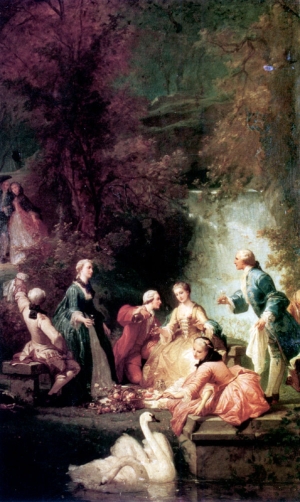 This is a dreadfully rude and unpleasant story, kiddies, for which I sincerely apologize.

It must have been Christmas 2003. Nancy had invited me to stay at the St Cloud Road house for a few weeks.

We had a lovely time together catching up, although it did take a while to get used to Nancy’s little habit of getting her secret service agents to position Ronnie in random places around the house in order to scare the maids. The new cook resigned on the first day I was there, soon after she walked into the pantry to find him hanging by his feet from the top shelf singing “I’m the Batman”. I’d been sitting on the toilet for 30 minutes one morning, and only realized that Ronnie was propped up in the shower stall wearing a sombrero when he called me “Mommy”. I got over my little constipation problem faster than you can say “Rush Limbaugh is a big fat pedophile.”

Please don’t think that Nancy was being mean. I think she was just bored all alone in that big house, and she said it gave him something to do with his time.There wasn’t much of Ronnie left, and what there was was basically a sweet four year old boy, so it was hard to dislike him, even if he did enjoy playing tricks.

Nancy and I had first met back during her Hollywood career, although of course it wasn’t so much an acting career as an early version of “The Bachelorette” – just Nancy hanging around on set and swilling champagne in the hot tub until someone asked her to marry them.

We used to write each other every month, although our friendship waned a little during the “Just say NO” years, when Nancy used to call Gloria V. and me and rant about us being “drug-addled hell-bitches” every time we got our photo in Vanity Fair.

Anyway, come Christmas time, Nancy decided to invite the Bushes (both 41 and 43) and the Cheneys and Karl Fucking Rove to fly in for a barbecue. I suggested this was like inviting all of the characters in “Whatever happened to Baby Jane?” into your living room, but she said that she liked to keep an eye on the latest tenants in her old house.

Of course, once they arrived, I realized I had gotten the reference wrong. Lynne Cheney might look and behave like Bette Davis coming down from a three week whisky-and-blow bender, but the rest of them resemble nothing so much as the cast of the Tim Burton version of “Gilligan’s Island”. Nancy and I would have to fight over who gets to be Ginger, and Ronnie could give a special guest appearance as the SS Minnow – thick as a plank and leaking at the seams.

Nancy and Ronnie and I were seated at the table in the garden when the guests arrived en masse – W wide eyed and giggling a little when he said hello to Ronnie, Lynne eyeing off the cutlery, and Dick gurgling as usual when he walked as the bile and shit and other viscous fluids redistributed themselves within his carapace. Barb and Nancy managed to shake hands without biting each other, which was a nice change.

I had the butler hand out the special drinks which I had prepared – bright-green vodka gimlets with Grammy’s special garnishes. The cheap vodka, of course – I was scarcely going to waste Nancy’s good stuff on that lot. I was going to slip some Valium into Laura’s glass, but she had pre-anesthetized herself, so it hardly seemed worth the bother. Not much was getting past her pink haze, although she still flinched, just a tiny bit, whenever W spoke. We sat her at our end of the table and gave her a spoon to look at and she seemed quite happy.

The Ipecac and Dulcolax Slings I’d made for Lynne and Barb took them out of the equation pretty damn quickly. W and Dick and Rove were all seated around Ronnie and were laughing about the invasion of Iraq and how they were going to find the WMDs any day now. The butler had only just put the shrimp cocktails on the table when suddenly Lynne made a face like a cow having a special visit from the vet, leapt from her chair and ran off in the wrong direction. Barb was standing up and laughing like a drain until, in mid guffaw, she vomited so hard it came out her nose. She headed off across the garden too, crashed into Lynne and then they both fell into the pool, spurting all the while from every orifice.

The secret service boys fished them out eventually and that was the last we heard of either of them for the rest of the day. No one else seemed particularly concerned. Nancy said something about hoping that the shrimp were ok, nodded at me happily and went on chatting to Bush Senior.

We finished our shrimp. W and Rove were talking about finally finishing the job in Iraq, which got them a nasty look from 41. I could see from our end of the table that Cheney had gotten bored and was entertaining himself by seeing how far he could poke his fork into Ronnie’s leg before Ronnie complained. Ronnie was rolling his eyes and fidgeting, so after I had summoned some more drinks I wandered down to pat his hand and reassured him that it was all going to be ok. By the time I got back to my seat, Ronnie was fast asleep and W and Rove had both chugged their new drinks. Cheney sipped his more carefully, looking at it suspiciously every now and then, but it all went down eventually.

A few minutes later when the entrees arrived, the speed in Rove and W’s drinks had kicked in and they were both sweating like Bill Donohue at a gay sauna. Rove said something about waterboarding and they both laughed and punched each other on the shoulders. Cheney poked at his steak with the point of his fork, then watched it carefully for a while, as if he might catch it breathing. 1000µg of lysergic acid diethylamide all in one go can tend to make one a tad paranoid.

At that point Nancy, bless her soul, started telling a long story about her last visit to her new psychic, Helmut. Helmut was a strange German man with an eyepatch and a squint of whom Nancy was very fond. Instead of reading tea leaves, he charged Nancy a thousand bucks a week to read the grains of salt in the bottom of her afternoon margaritas. On her last visit he had warned her that the dead spirits of those who had hated her in life could follow her around and do her mischief.

At the time, Nancy had laughed and said that she should be fine as long as Barb Bush and Rosie Carter hadn’t yet shuffled off the mortal coil.

However, now she made a big thing of how her psychic had told her that the spirits could seek their bloody revenge, which she described both in great detail and with that particular relish that Nancy always brings to descriptions of suffering.

Cheney was staring at her. His eyes were glassy and wide, and he twitched occasionally. As she went on, he started looking from side to side over his shoulders and mumbling about it all being Condoleeza Rice’s fault. His nervousness started to get to W and Rove and they started giggling nervously and asking Cheney what was wrong. He kept telling them to be quiet because he couldn’t “hear them coming with you fuckers talking”. Eventually, they had all worked themselves into such a state that when the butler brought round the chocolate mousse they all almost jumped out of their chairs.

In the middle of dessert, Ronnie coughed and woke up. W let out a little squeak like a startled prairie dog and, I suspect, also a little bit of wee.

Ronnie’s eyes slowly swam into focus. He blinked twice, and peered across the table. His hand came up off the table and every eye in the room was fixed on it as it pointed, quite deliberately, first at Rove, second at Cheney and finally at W.

They all leaned forward, swaying and sweating and vibrating, yet eager for the words from the lips of the Great Liberator to banish their terrors and absolve their sins.

Ronnie raised his head just a little, carefully licked his lips and, looking again at each of the three in turn, just as deliberately said, “Asshole … Criminal … Gilligan.”

Ronnie smiled, farted and then promptly went back to sleep.

Just then Nancy’s Mexican gardener José wandered through from the pool. Cheney took one look at him and dived under the table screaming that the dead Iraqi hordes had come to get him with their terrible trowels of vengeance. W fainted and toppled backwards, while Rove crapped himself with a thunderous noise like Chris Christie’s girdle coming undone. Cheney pulled W in under the table and sheltered under him, making that screeching noise that pigs make when they are being slaughtered.

Soon afterwards we shepherded them all off the property, looking for all the world like the unsuccessful gold ticket holders at the end of a particularly sadistic version of “Charlie and the Chocolate Factory”.

41 stayed behind and we all went and had some more gimlets – made with the good vodka, of course. I quite like 41 – he can almost out-drink me and he does a hilarious impersonation of Newt Gingrich that involves two forks and a salt shaker.

Now, Ronald Reagan may not have been a very nice man. My nephew Kevin tells me that Ronnie was a monstrous and genocidal maniac who really only found out how wrong he was when he arrived in Hell and was assigned fifteen specially-created demons, each with the face of Anita Bryant, whose job was to gnaw out Ronnie’s entrails every day for the rest of eternity.

I think that’s a little cruel. I’m sure they let the demons have a day off every now and then.

I’m not sure why Kevin hates Ronnie so much, though I have no real reason to disagree with his assessment.

However, even at his most dribblingly senile, even once his once-average brain had crumbled to a level slightly below that of Bonzo the fucking chimp, even then Ronald Reagan knew what amoral, cowardly, evil bastards looked like when he saw them.

[Picture: Adolphe Jourdan (1825-1889) – A Summer’s Picnic] [Cross posted at Sarah, Proud and Tall.]
Previous Post: « Gold paint on the palace gates comes from the teeth of pensioners
Next Post: Suckers »