You are here: Home / Foreign Affairs / Can islands of land become a state? 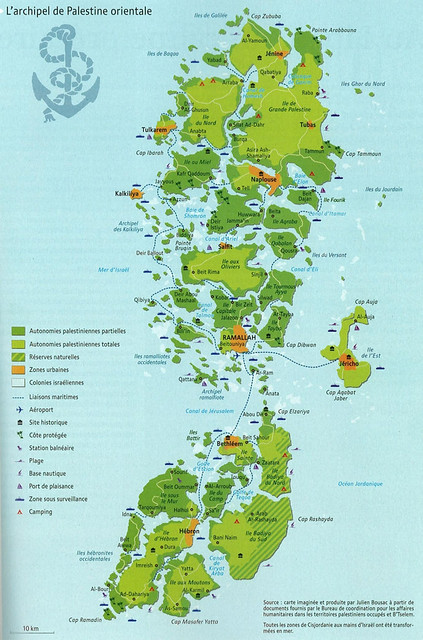 I listened to President Obama’s speech today. It was quite subtle and yet pretty important. On one level it said things that have been said for years. And on another these things were said with some new twists. The part of the speech that is lighting up wingnutopia was when he said:

So while the core issues of the conflict must be negotiated, the basis of those negotiations is clear: a viable Palestine, a secure Israel. The United States believes that negotiations should result in two states, with permanent Palestinian borders with Israel, Jordan, and Egypt, and permanent Israeli borders with Palestine. We believe the borders of Israel and Palestine should be based on the 1967 lines with mutually agreed swaps, so that secure and recognized borders are established for both states. The Palestinian people must have the right to govern themselves, and reach their full potential, in a sovereign and contiguous state.

Those facts are represented in the map above. It is a map found in Le Monde Diplomatique’s 2009 Atlas – A world upside down. A couple of years ago this map was featured on the wonderful blog, Strange Maps.

The freak out over the 1967 borders remark masks a bigger panic attack over the sentence: “The Palestinian people must have the right to govern themselves, and reach their full potential, in a sovereign and contiguous state.” Especially the word “contiguous”. To create such a State, one must go back to the 1967 borders as the starting point. There is no other way to get there and anybody who has looked at this conflict over the last 40 plus years knows it.

There is no way to make the Palestine Archipelgo a Nation. These are not islands surrounded by water. They are cantons surrounded by fences, troops and checkpoints. Using the current facts on the ground as the starting point means that you have abandoned any hope of a two-State solution. You could claim as Bibi and his supporters claim that you want a two-State solution, but if you cannot accept the 1967 borders as the starting point, you are lying. It is just a simple fact on the ground.

Look at the map. How do you turn these fenced and land-locked islands into a State? It can’t be done. All you can do is turn them into Reservations like we have done with Native Americans–areas where there are small rights to limited sovereignty and limited opportunities and not much more.

To reject the 1967 Borders is to embrace a one-State solution as your option of choice. This is an option with some down sides. For example, it requires Israel to drop the idea that it is a Democracy as it requires an embrace of a legal caste system where some folks have rights while others have none–and that those rights are based on religion and religion alone. This is a pathway doomed to certain failure. And yet this is the pathway that Netanyahu and his supporters are embracing. I always wonder how the folks who reject the 1967 borders, plan to “define” a two-State solution or how they plan to control a growing, hopeless and angry Palestinian population in their fenced-in island ghettos.

A few years ago Jimmy Carter tried to warn folks about the futility of this path. Now it is President Obama’s turn.

Today, he tried to remind both sides in this conflict that they will only find a solution by embracing reality. Not surprisingly, that call has earned automatic rejection from the reality-free zones of wingnutopia and the politicians who pander to these fools.

Next week, President Obama will give a speech to AIPAC. The speech and the wingnut build-up before and after should be interesting.

As we all know, any post about the I/P issue is troll chum. So it goes.

I do not really care to chit-chat about who the bigger asshole is in this endless conflict. From where I stand, it seems that epic assholes can be easily found on either side. And yet, there are also some great people actually striving for a solution on both sides. I thought President Obama gave those folks a helping hand today. Whether that hand is enough to overcome the parade of dickheads pushing for endless conflict remains to be seen. I am hopeful, but time will tell.

And now, please use the comments to freak out about this topic or any other thing stuck in your craw.