Two news story waves popped up today about the competition to be the 2012 Republican Nominee for President. One concerned the latest Gallup poll about the horse race–you could just feel the panic as Republicans contemplated their choices.

Underwhelmed, would be an understatement.

And then the other news wave broke that the Quitta from Wassila might join the fray. She is number two in the poll and the base is just crazy enough to make her a viable–and yet laughable–GOP standard bearer.

And the BoBo Republicans are so hurt by the Daniels rejection that they can barely lift their heads off the floor. It sad to to watch them bravely type on and try to articulate some reason to support Mittens or Huntsman. Their courage in the face of such sadness, is all the more remarkable because the astroturf TeaBaggers have marked the last two BoBo-ready dudes as future road kill. Meanwhile, old T-Paw has decided to compete with Gingrich to see who can be the biggest liar in the race. And all the candidates are working overtime to “out-crazy” each other.

What a clown show.

As this fail parade marches over every cliff, it strike me that it is the polar opposite of the Democratic Primary race in 2007-2008. That race inspired the base and was exciting from day one. “Exciting” will never be a word used to describe the 2012 GOP race for the White House.

Think back to May 2007. It was already one hell of a race for the Democratic Nomination–and it would last for more than another year before it was decided. It was passionate and interesting. Even if you didn’t follow politics it was news you followed. The stars were Clinton, Edwards and Obama. Biden, Dodd, Richardson, Kucinich and even Gravel had their supporters and they all made the race more competitive–and interesting.

By this time in 2007 I had already seen all the candidates speak at events in DC. I was undecided but leaning towards Obama, but it was a great feeling to be undecided. I knew the bench of possible candidates was deep and felt that any of my top choices would be just fine. It was exciting to know that your vote–and your support–mattered. 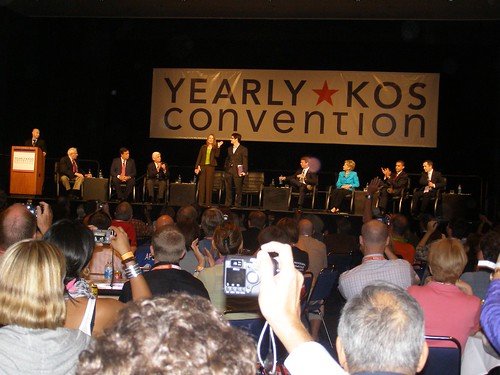 In August all the candidate, except Biden (who needed to stay behind for a vote) showed up at Yearly Kos for a debate in front of progressive bloggers. We were mobilized and passionate about the race. It played out over the next year with lots of ups and downs and twists and turns and it was never dull.

OTOH, the current GOP race just screams dull. The only fun is watching the endless series of mistakes the candidates make like clockwork. It is one train wreck after another. And when Queen Palin and Countessa Bachmann jump in the crazy train will never stop.

This race will get the attention of the 27 percenters of wingnutopia and they will decide it, because they make the most noise. Then the rest of the Republicans will follow them over the edge and to their doom. BoBo will weep, but that’s not a bad thing.