There are days, kiddies, when I tire of politics and the heady whirl, and the thought of suffering through another fifteen pages of Kathryn Jean Lopez whining about young girls wearing makeup is enough to make me want to remove my own hand so I can’t operate the mouse any more.

There are days when I can’t muster the strength to tell you the story of the time when Chris Christie got stuck on the Tilt-A-Whirl at the Convent of St. Fidelis of Sigmaringen’s Annual Fair and ended up vomiting on Ann Coulter’s head during the ceremonial stoning of the adulteresses in the carpark out the back, despite the pleasure I know such a story would bring to you all.

Today is one such day. The final straw this morning was Jonah Goldberg offering congratulations to Ben Fucking Shapiro at the Corner on that basis that Ben has apparently:

in his new book, in addition to not soiling himself in public for five whole days. The Hollywood Reporter quotes several of the more shocking revelations from Ben’s book, including that:

MASH had a pacifist agenda, says co-creator and director Gene Reynolds. “We wanted to point out the wastefulness of war,” he says in the book.

Be still, my barely beating heart – a fine piece of investigative journalism that surely rivals the time Peggy Noonan photocopied her own vomit and sold it to the Washington Post as a hard-hitting expose of alcoholism in the news-media.

Peggy, by the way, is channelling Andrew Sullivan:

Democrats, on the other hand, should be forced to answer a question. If you oppose the highly specific Ryan plan, fine, but tell us your specific proposal. How will you save Medicare? Will you let it die?

questions to which my considered and carefully expressed response is “Screw you, you drunken asshole”.

On days like this, I like to bake, and I hope you won’t mind me sharing a recipe with you. You may need the distraction as much as I do.

Today I have been pottering around my charming kitchenette – I have grey granite benchtops, by the way, and Halston oven mitts which are the same cerise color as my refrigerator – cooking a little recipe which I snaffled from Julia Child. I don’t mean I cadged it from Mastering the Art of French Cooking, although I’m sure it’s in there. I mean I managed to grab it out of Julia’s pocket one evening in Paris when she was trapped under a drunken Simone Beck. There. Don’t say I never do anything for you. Now you’ve got a free recipe and you don’t have to watch that Julie and Julia crap either.

You need 2 pounds of apples, a little bit of water, the finely grated rind of a lemon, a cup and a half of sugar or so (depending on how sweet your apples are), a big slosh of brandy (I like to use Pommeau de Normandie because I’m dead fancy), a tablespoon of butter and two whole eggs plus one egg white.

Julia says that you need to have a two and a half pint, cylindrical fireproof mould but frankly, who the fuck would have one of those? I use a little rectangular perspex baking dish.

The first stage is to line whatever you are cooking the pudding in with caramel, just like a creme caramel, so that when you unmould it the pudding has a brown glaze and a delicious caramel sauce.

Put three quarters of a cup of sugar in a little saucepan with enough water to just wet it, turn up the gas pretty high and let it bubble until the water dissolves and the sugar melts and darkens. If it starts to burn in any spots, swirl the saucepan until the sugar mixes together. Don’t stir it or the sugar will crystalize, and for God’s sake don’t get it on yourself. I like both my caramel and my men dark brown, but it’s really up to you.

When the caramel has reached your preferred shade, pour it into your dish and then (wearing oven mitts, please) quickly tilt the mould around until the caramel has set and covered the whole of the inside. Then put it aside for later.

Peel the apples and chop them into quarters. Put them in a big saucepan with a little water, cover on a low heat and simmer for 20 minutes until the apple is soft and starting to fall apart. Stir in the lemon rind and the rest of the sugar. You can put a big pinch of cinnamon in at this point if you like.

Then turn up the heat and boil the mixture for about five minutes, stirring all the time, until you have a very thick apple sauce. Whisk in the alcohol and the butter and, when the butter has melted, the eggs one by one. You’ll need to be quick so the egg white doesn’t start to cook, but if you end up with some little bits of cooked white, just whisk until they go away.

Pour the mixture into your baking dish, stick the baking dish in a larger baking dish and stick the lot in the oven. Pour boiling water into the outside dish three quarters of the way up the side of the inside dish and let it cook for an hour. It should puff up quite nicely. If it is browned on top put a piece of baking paper over it, and then cook for up to another half an hour until it seems quite set and starts to pull away from the edge of the baking dish.

This is wonderful hot and spooned out of the dish, or you can put it in the refrigerator overnight and then turn it out onto a plate for serving. It is really quite delicious – light and yet full of the flavor of the apples. 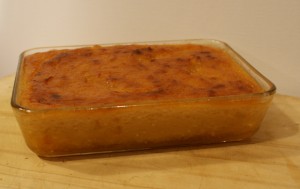 This picture may not look particularly appetizing, but if you pair this it a nice ice cream (like my never fail vanilla and poached pear), you will have to beat the family off with sticks. I was going to unmould it and take a picture of that, but I said ‘Fuck it” and ate the damn thing.

The pudding is quite smooth, so any additions from your personal pharmacopoeia will need to be carefully ground before mixing them in after the eggs. However, the bitterness of the caramel is very good for camouflaging the taste of almost anything. Cyanide in particular imparts a quite lovely almond hint to this dish.

What has been cooking at your house?

[Cross posted at Sarah, Proud and Tall.]
Previous Post: « Why Is This Not Being Discussed?
Next Post: Not just Israel »