You are here: Home / Politics / An Unexamined Scandal / When Grifters attack 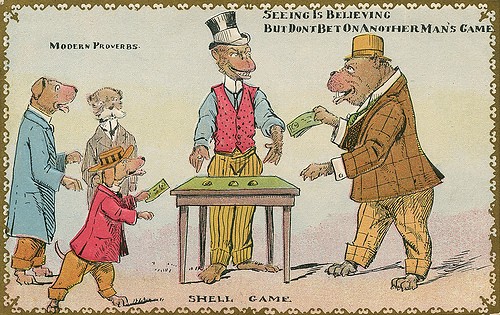 Now. Tonight. In Washington. Grifters from all over America are in town sharing tips and better ways to scam the guilble. It is one big wet kiss to the beauty of the con. It is a celebration of the folks who put the “Con” in Conservative.

It is the second annual Faith and Freedom Conference. It was organized by Hall of Fame grifter Ralph Reed. Reed is a fellow who has super-charged the “I am a Christian scam” to levels that would make Satan himself blush. A few years ago it looked like Reed would go down in the Abramoff scandal. He was exposed as a money grubbing, hypocrite who had no problem scamming Christians into support gambling, human trafficking, sex slavery and forced abortions just to make a fast buck. The list of Reed’s exposed crimes and ethical lapses should have ended his grifter career and his influence over anything. But Ralph is a Republican, and we all know that any crime Is OK If You’re A Republican. And so, Republican candidates for President and other elected officials come to the Faith and Freedom Conference to lick Ralph Reed’s ass.

But that’s not all.

They also come to bow before Grifter legend Grover Norquist. He was also exposed in the Abramoff scadal and should have gone to jail, but he made a deal with McCain. Grover supported McCain’s run for the White House and McCain let the investigation end and made sure that evidence of Grover’s crimes were buried for twenty-five years. And now every Republican seeking office must make the stop to lick Grover’s ass as well.

And then the rest of the schedule is just filled with other grifters–big and small–and the politicians compelled to pander to them. Watch some of the C-Span feed if you feel like checking out the freak show. You could drop in anywhere and it would be almost always the same: Obama is bad. He is that scary black thug seeking to destroy America. White values are under attack. And only by giving your time, money, energy and money to the grifters behind this conference can you and those you love be saved from Obama and his nonwhite army of destruction.

And while most speeches are predictable, sometimes they are accidetially revealing. The speech earlier tonight from Dick Morris was an example (see the beginning of this segment). It was a direct appeal to white voters that their very survival depends on opposing Obama–who in Morris’ telling was only elected because ignorant young white voters made common cause with Latinos and shiftless Negroes. It was shameless race-baiting, but It was also OK because, well, they are Republicans.

That grifters like Reed, Norquist, Beck, Armey, Palin, Trump, Ailes, Gingrich, Ryan and so many others control the CONservative movement should tell you all you need to know. It should also inspire you to keep a tight grip on your wallet whenever any of them are near–but no. Instead they are celebrated. And the worst of them must be paid off and give their blessings before any candidate is supported or any action by the Republican Confederate Party is taken. Having Reed and Norquist as GOP gatekeepers is like Democrats deciding that Dollar “Bill” Jefferson, John Edwards and Rod Blagojevich have to approve any candidate or policy before others in the Party would endorse it.

The idea that you out-source control of policy and candidate approval to known grifters is insane, but, also too, IOKIYAR.