You are here: Home / Open Threads / The Spokane Horror, Part 2 or, Whatever Happened to Huck and Ann? 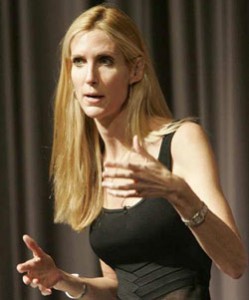 Well, my dears. It has been a busy week and, although I promised you I would finish my little story about Pastor Huckabee and the Convent Fair last night, other circumstances intervened and I have only now had a chance to sit down and write it out.

If you haven’t already read the first half, then you may wish to bugger off now and catch up with your reading. However, let me repeat my warning – this is a long, dark and convoluted tale which contains scenes of a most distressing kind and, as such, should not be braved by those of a sensitive or suggestible nature.

Are you sitting comfortably?

I seem to recall that when I left you I’d just clonked that terrible Huckabee man on the bonce with a candlestick, and I can tell you it made a most satisfying crunching noise.

By the time Huckabee’s eyes flicked open, the screams of distress from Chris Christie had blended now into a single wail of despair. The air shimmered now and crackled with electricity. Huckabee thrashed as he realized that he was bound hand and foot by silver shackles which had been screwed into each corner of the black stone tablet that marked Brigham Howard’s grave. I could tell from the way he squirmed that the stone was ice cold beneath his naked buttocks. He may not be a small man, but he has those unfortunate concave buttocks that many older men have, so there wasn’t much padding between him and the stone.

The cold had, of course, lead to some shrinkage issues and the Little Governor was now, as I seem to recall Carrie Fisher remarking about the same appendage of Dan Quayle, a freezing cold acorn, screaming, screaming for cover. However, I had Ann Coulter stomp on him with her high heels for a while and that little problem soon went away.

When he had finished wailing and squirming, I stood over him until I could see myself reflected in his eyes. I was dressed to the nines in bespoke Dior, and on my head was a tiara of opulent and phantastic design, made of gold, although with a weird lustrousness which hinted at some strange alloy. One could spend hours studying the drippingly marine curves chased and moulded into its surface, and in fact I often have.

Tiffany, of course – from their Eldritch Armageddon collection. I understand that nice Mrs Gingrich is quite a fan.

“You!” Huckabee said, as he recognized me. “Release me, you hell harridan.”

All I did was laugh at his struggles. I clicked my fingers and first Condoleeza and then Ann Coulter in her turn threw themselves down, their naked forms writhing upon him like spawning salmon as they coupled with him, one and then the other, again and again.

Void of clothing, all of the Sisters were now braying and bellowing and writhing in a monstrous ring around us, all naked now and chanting those wonderful words “Ph’nglui mglw’nafh Cthulhu R’lyeh wgah’nagl fhtagn”. Their arms flapped as they circled, first on two legs and then on four, a limitless stream of flopping and croaking half-humanity with dead, bulging eyes and palpitating gills, all moaning words of power.

It was quite like the Republican Party convention, although without the placards and the repressed homosexuality.

Then, as Ann perpetuated some indescribable obscenity upon Huckabee’s recumbent form, as Huckabee begged “No more! No more!”, came a voice that was not a voice; a sense only of words spoken without a tongue:

At that moment there was a knocking on the other side of the obsidian stone that covered Brigham Howard, that stone baptized with the fluids of Huckabee’s stolen lust. The knocking grew louder and with each knock the stone block shuddered. Huckabee began to screech in fear, his noises harmonizing with the wordless howl still coming from outside the chapel and with the bestial grunts of Coulter, still humping her fishy form upon him.

The knocking stopped and Huckabee caught his breath in fear, and then the dark rock began to lift up all around, as if it were being pushed from behind by some hideous hand. It lifted and, in a moment, it was clear of the marble floor all around its glittering sides.

How can I describe the horror that spilled out from beneath? It seethed there in the dark below – a shivering mass of piebald-skinned tentacles that clutched at themselves, that grasped and seemed almost to chew the air with their red sucking mouths, a clump of coarse black fur that itched and heaved, and here and there a horn or a hoof or a quivering sphincter that sprayed forth mucus upon the cavorting hordes, all surmounted by Uncle Brigham’s shock of bright-blond hair and his shit-eating grin.

I stepped back a little. That dress was hand sewn by Christian Fucking Dior himself, and there was no way I was getting ectoplasm on it, end of the world or no.

One of the larger limbs snaked out, its skin the lipid color of drowned men’s thighs, its suckers clenching as it grabbed Condoleeza and dragged her down into that terrible pit, snuffing out her wail of happiness at being the first to feed the Great God.

The God would rise and we would all be crunched between his terrible teeth.

Pride goeth before the fall, of course. In my joy and righteous terror at the moment we had hoped for for so long, I had not been watching Huckabee, did not see him close his eyes and begin to pray, did not see him murmuring his prayers to his God.

If I had seen, I may have been able to stop him, to stop his mouth, to stop the words of worship which came to him so easily in his fear. If I had only seen ….

But I did not see until it was too late, until his prayers were said, until his God was there in the midst of us. His God, the great YOG-SOTHOTH of limitless being and self, she who the crab creatures of Yuggoth worship as the Beyond-One, she who the vaporous brains of the spiral nebulae know by an untranslatable word that sounds a little like someone being sick.

She was terrifying, more terrifying than anything I have ever seen, and I’ve seen Peggy Noonan with her dentures out.

Too late to do anything but hide as her feet crashed down upon the stone, crushing the Great God back down into the earth, sweeping aside the circling Sisters with her taloned hands.

Too late to do anything but cower and listen in fear as she strode around the chapel chanting words in a hideous sing-song voice that grated at the ears and made the stomach lurch. Such words, such indescribable words whose meaning lies beyond the ken of a simple woman like me:

“Old Gods. All of ’em, any of ’em that have been in front of me over all these years, they misunderestimated me. As Cthulhu rears his head and comes into the air space of the United States of America, the America I know and love, it is not one in which the hockey moms or my parents or my baby with Down Syndrome will have to stand in front of a death panel and then be eaten because of a blood libel that serves only to incite the very hatred and violence they purport to condemn with their warning shots and bells that say we are going to be sure and we are going to be free. Also. Too.”

And with that, she was gone and all was quiet.

It will be another hundred years before the dark moon Yuggoth is in the proper alignment again, until our palaeogean magic can attempt to wake dead Cthulhu in his house at R’lyeh. A long time, an impossible time for someone of my advanced years. But while I may not live to see him rise, time is something of which we have an inexhaustible supply. We can wait, for we are patient and we always come back. No matter how long it takes, no matter how viscerally the world rejects the Old Gods, we always come back, for the memories of the world are short and the cycle of the earth is long.

We’re like cockroaches, or perhaps Republicans. Our time will come.

Of course, after the disappointment of the end of the world being called off, the afternoon tea that followed was a little subdued. Everyone had trouble meeting everyone else’s gaze and Pastor Huckabee didn’t seem to have much of an appetite, even though I had made my special strawberry shortcake

However, we did have the ceremonial stoning of the adulteresses in the car park of the 7-Eleven next door, which cheered us all up. I must note that no-one actually died at the stoning, although that strumpet Sarah Thompson from across the road certainly felt the cleansing fire of a few well aimed pebbles on the back of her head.

And Chris Christie was so overwhelmed by his little ride on the Tilt-A-Whirl that he vomited on Ann Coulter’s head.

Which was a small consolation for the disappointments of the day.

[Cross posted at Sarah, Proud and Tall.]
Previous Post: « I Wish I Knew How it Would Feel to be Free
Next Post: We’re Political Hacks, Not Grifters »