You are here: Home / Open Threads / A penny for your outrage

It has gotten pretty predictable–and a bit boring. The grifters are out in force and running the same old scams. Over and over and over. The Republican Party and conservative movement in America has been completely captured by grifters. It is just stunning to see a crook like Grover Norquist with more power than anybody on the Right. He is the triumph of single issue grifter politics.

And grifters plying their trade in Democratic and/or Progressive waters are jealous of Grover and his fellow traveler wingnut bandits. It was not a surprise to learn that apprentice grifters like Jane Hamsher have been working with Grover to learn the secrets of the trade: control the message, take ownership of an issue, develop “media” contacts to carry your message, and–most importantly–cash in.

A little item published earlier today in Pravda on the Potomac (no link for them) worked hard to sell the con: 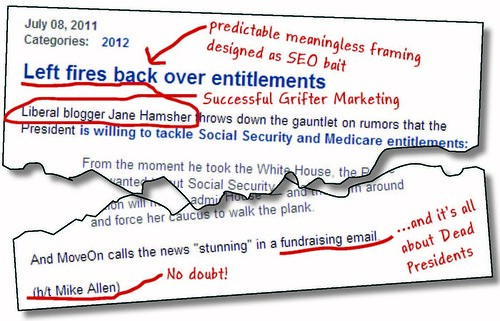 We know how this will end and that the pattern will be repeated. The issue really doesn’t matter at all. It also doesn’t matter if the con is sold with a Conservative or Progressive frame. The pattern is always the same and it is all so predictable.

A trigger is published in the media from a speculative source. It will outrage the single issue grifters. Anything that happens or doesn’t happen will will be used to pimp the urgency of their rage. Any thin reed of speculation will be sensationalized with text crafted to maximize search engine optimization, buzz and clicks. The gullible will believe the lies and give the grifters their emails and their money. Almost everything said to promote the outrage will be wrong, but that will not matter if the grifter can control the narrative. Fools will parrot their outrage talking points, give them money and some small measure of political power.

Eventually, reality will settle in and only the extremely stupid will still buy the con hook, line and sinker. But by then, the grifters will have move on to another manufactured outrage and mo money for them from the fools among us.

John is right in his earlier post. Summer is the season of stupid in America–August especially.

Today it is the negotiations on the debt. When it is resolved, a fresh appeal to fear and rage will be manufactured. The outrage industry is absolutely boring and predictable. I consider these grifters from Grover to Jane and find myself thinking of tar and feathers as I stake my tomato plants. And yet, what the world really needs is another Open Thread. Please use this one to correct all the mistakes made on the internets.