You are here: Home / Politics / Crazification Factor / My Kindergartener Could Solve Differential Equations Better Than That

Update: Let this post be a witness to the inadvisability of blogging whilst consuming the first caffeine of the day.  Much better to suck down dose 1 and probably 2 as well — else the rain (sic!) of (thankfully minor) error below.  Yup, Mr. Pollack’s name is actually Pollock — a fact available even to this blogger directly in the block-quoted text; Doha is the capital of Qatar, not the fictious metropolis, Qatar City; and the alien consuming the souls of Republicans is a Tomato Hornworm lookalike, not a “hookworm.”

I need a nap.  In other news:  I kind of expected a “Pollock was a drunken fraud” theme to develop in the comments — no discussion of the man escapes that tired old trope, and it certainly gives the title of the post a bit more juice.  But that several folks could get into it arguing over whether the Mays catch was or was not routine — that’s an example of what I love about the BJ crowd. For the record:  that it was a no fuss and bother catch for Mays is the point, at least in the context of a discussion of high art and deep science.  Routine for him ain’t exactly chopped liver for the rest of us; the very expected nature of that kind of outcome (after all, he caught the ball in stride, with no need to lay out or crash to the turf) is an element in our appreciation of the artistry Mays brought to the outfield.

With that, back to your regularly scheduled programming.

Man, I so need a break from politics now.  Given that the Party of Lincoln has decisively transformed itself into that of — oh who the hell knows…say Tomato Hookworm-Space Aliens, and we can’t seem to build asylums fast enough to cage the crazy, I just hit the wall.

I know that I haven’t been posting much lately  —  the consequence of a summer deconstructed by the there-and-back-again frenzy of trips to surreal cities (Shanghai, Doha) and the blessed internet-free cloister of the mountains.  But truly, my (unaccustomed) silence is born of the sense that the fools and knaves really have managed to gut the American, and perhaps the human experiment for good and all — or at least for that foreseeable future that includes my son’s maturity.

I don’t actually think that’s necessarily true, for a lot of reasons, including this one.  But still and all, it is good to read some stuff that had nothing to do with dominion and the amount of creativity some people can bring to bear on screwing the most vulnerable among us.

At a glance, a painting by Jackson Pollock can look deceptively accidental: just a quick flick of color on a canvas.

A quantitative analysis of Pollock’s streams, drips, and coils by Harvard mathematician L. Mahadevan and collaborators at Boston College reveals, however, that the artist had to be slow — he had to be deliberate — to exploit fluid dynamics in the way that he did. 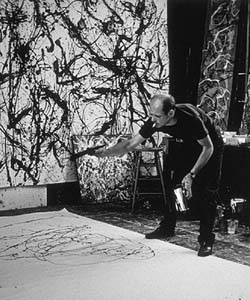 The linked article at the Harvard Gazette is a bit of bait and switch.  Pollock wasn’t a physicist, of course, except in the sense that one of the qualities that distinguishes a great center fielder, for example, is the ability to solve the equation describing the curve traveled by a batted ball swiftly (and subconsciously) enough to make the most astounding catches seem …routine (almost). 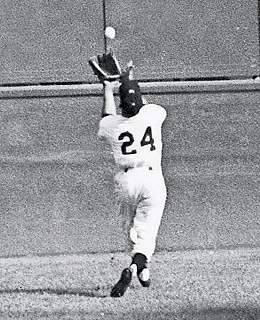 But even if there is a difference between living physics and thinking  about it, there is a crucial overlap as well:

“My own interest,” said [mathematician/physicist] L. Mahadevan, “is in the tension between the medium — the dynamics of the fluid, and the way it is applied [written, brushed, poured …] — and the message. While the latter will eventually transcend the former, the medium can be sometimes limiting and sometimes liberating.”

Pollock’s signature style involved laying canvas on the floor and pouring paint onto it in continuous, curving streams. Rather than pouring straight from the can, he applied paint from a stick or a trowel, waving his hand back and forth above the canvas and adjusting the height and angle of the trowel to make the stream wider or thinner.

Simultaneously restricted and inspired by the laws of nature, Pollock took on the role of experimentalist, ceding some control to physics to create aesthetic effects.

The hunt for a deep connection between science and art is an old preoccupation of practitioners of both of those creative crafts.  I’ve written about instances of this cross-cutting desire in a couple of my books — Bach’s joining of the “society of musical sciences” in 1747; Einstein’s invocation of aesthetics, (calling Bohr’s 1913 theory of the atom an instance of “the highest form of musicality in the sphere of thought)” and so on.

Einstein’s quote captures what I think of as the nexus of the art-science connection:  a shared sense of both method and motivation.  For motivation:  artists and scientists don’t always find it easy to articulate why they do what they do — but when they reflect out loud on such questions, they regularly do in language that sounds strikingly similar.  Both guilds celebrate the pleasure of a rich problem, the joys of working things out, the sense of seeking deep truths and so on.

And by method, I mean not specific technique or intellectual apparatus: no one suggests that Pollock was actually solving the equations of fluid dynamics to derive the correct physical gestures he would need to produce the effects he wanted.  Rather this is a thought about process — about the combined impact of experimentation and seemingly spontaeneous imagination on both artistic and scientific investigations.  Here’s Mahadevan again:

The artist, of course, must have discovered the effects he could create through experimenting with various motions and types of paint, and perhaps some intuition and luck. But that, said Mahadevan, is the essence of science.

“We are all students of nature, and so was Pollock,” he explained. “Often, artists and artisans are far ahead, as they push boundaries in ways that are quite similar to, and yet different from, how scientists and engineers do the same.”

That’s a bit of a waffle, I’ll admit:  artists and scientists work the same way — except when they don’t.

But still, I get the point imperfectly made in that quote:  artful people across a wide range of domains share some crucial qualities of mind.  Here, Mahadevan calls out the two I think of as vital:  a delight in empiricism, and that sense of wonder in the face of material existence that sparks in the imagination glimpses of solvable problems.

That’s about all I would want to say on this, so I’ll sign off, with just this one last, probably unnecessary swerve back to my immediate political neuroses.  There are lots of ways to parse the catastrophic state of the Republican Party now — and by catastrophic, I mean for the nation, in that I don’t care if the GOP goes the way of the Whigs, but I’d rather they didn’t do so by partying as if it were 1861.

You can see that party’s debacle as rooted in class warfare, with uber-wealthy elites bankrolling a faux-populist insurgency.  You can, as Dennis G. does here, powerfully and accurately, trace the roots of the current fiasco in anxiety (and worse)n in the face of demographic (and, I’d add, technological and geo-political) transformation.  You can see strains of the millenia-long urban/rural battle. (In that context, I’ve long thought that Jane Jacobs late and less well known book Systems of Survival had a lot to say.  And if anyone were to suggest that there was pleasure as well as insight to be had in digging up the Mumford classic, The City in History, I’d not disagree.)

But to all of that I’d add this:  what’s been striking in the know-nothing ascendency in the GOP — the Rick Perry phenomenon and all the rest — is not so much that a grifter-Texan would have a pitch-perfect feel for every neurosis of the Republican primary electorate.  It’s that people who actually really do know better — I’m looking at you Mitt Romney — are trying to toe the same line, parroting the orthodoxy that empirical knowledge matters not in the face of certain revealed truths, and that active human agency (government!) cannot solve problems.

Artists, they are not.  Scientists neither.  In power they should not be.

Images: Jackson Pollock at work in his East Hampton studio, before 1956.

Willy Mays’ game-saving catch in Game 1 of the 1954 World Series.