The following are the results of Hot Air’s Monthly Presidential Candidate Poll Results. If you want to sully your computer with the detailed “polling results”, then you can go over here, but frankly one of us giving them hits is probably more than enough. I spent thirty seconds looking at their front page and feel more soiled than the time Andy secretly filmed me doing a wee on Joe Dellasandro.

Anyhow, just in case you were wondering who the cream of wingnuttery* wants to be President this month, the winner, in an almost unprecedented (well, since two months ago) breakaway surge to the front, is – Herman Cain. 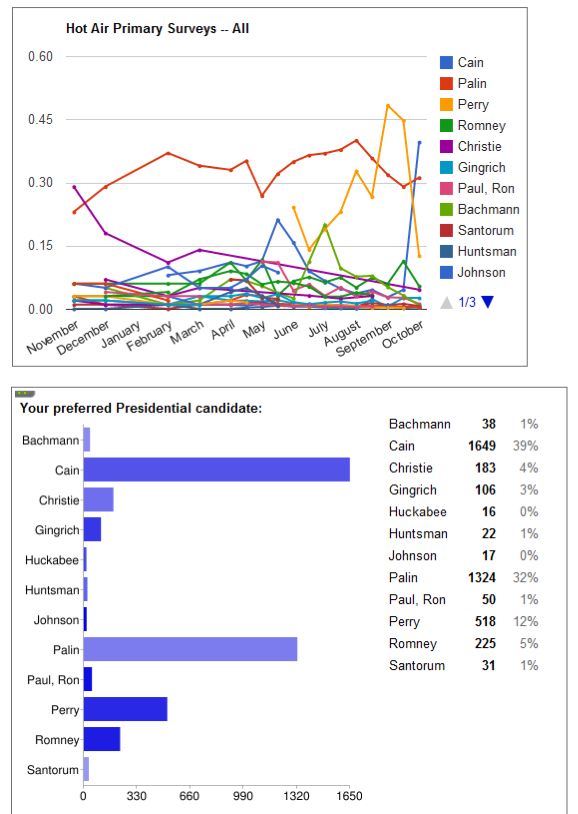 Yes, Rick Perry is dead and the new king of the dribble-stained is Herman Fucking Cain. Cain’s only real challenger (for the next ten minutes, until most of them change their mind again) is Sarah Palin, followed far behind by the sad assortment of boobs and god-botherers and was-popular-a-month-agos who make up the remainder of the pack. Interestingly Palin is the only one on the chart who shows any form of consistency, hanging around the magic 30% mark, which just goes to show that once you have managed to tear an acne-riddled virgin away from his semen-stained copy of The Fountainhead, and convinced him to vote for the pretty one with the sparkles, he can be remarkably loyal as long as he believes that there is the smallest possibility that he might get to see those sparkles up close and in person.

I also love this chart:

which appears to show that among the polling group, who have in the last year had Chris Christie, Rick Perry, Palin, Michelle Bachmann and Cain (twice!) in their top two front runners, whose poll results have gone up and down like Rick Perry eating a weiner-on-a-stick while riding on a roundabout, 60% are “very committed” to their chosen candidate (just like last month when 70% of them were “very committed”), which either means that the other 30-40% of them are changing their votes almost every month or they are all fucking stupid.

I realize that doesn’t need to be an either/or sentence, but I like the way it scans.

* “cream” in the sense that it’s thick, unctuous and if you leave it on its own for three weeks in a basement it begins to smell like old feet and socks that have been used for purposes that god did not intend.