You are here: Home / Past Elections / Election 2012 / Following in the footsteps of George Wallace 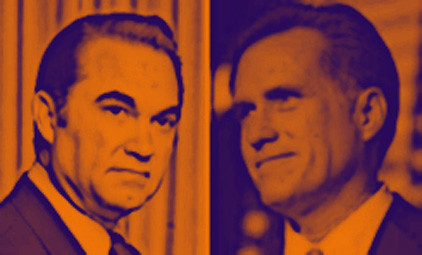 George Corley Wallace is remembered as a symbol of American racism. Folks remember the image of him standing in the school house door to block integration and his words “segregation now, segregation tomorrow, segregation forever”. Folks remember his two runs for the White House on a “Law and Order” platform that seemed to be entirely built out of racist code talking and dog whistles. Wallace worked hard to earn his status as an icon of racism.

And yet, I don’t think George Wallace was a racist. Rather, I think he was an ambitious man who decided that pandering to racists was his best path to power. In his early political life, Wallace was liberal–a progressive. He was an alternate Democratic delegate to the 1948 Convention and did not join most of the Alabama delegation as they walked out to protest the Civil Rights plank Harry Truman had added to the platform. He returned to Alabama and served on the Board of Trustees of Tuskegee Institute. He was elected a Circuit Court Judge and was remembered as being pretty damn fair regardless of race. In 1958 he ran for Governor and sought the endorsement of the NAACP while speaking out against the KKK and refusing their support. His opponent pursued the opposite strategy. Wallace lost badly and told a friend “you know why I lost that governor’s race?… I was outniggered by John Patterson. And I’ll tell you here and now, I will never be outniggered again.” In response, he tossed his values and beliefs overboard and perfect the pander to assholes as a winning political strategy.

And this brings me to Willard “Mitt” Romney. He is just as ambitious as George Wallace and like the former Alabama Governor willing to say and do anything in the pursuit of that ambition. Like Wallace, Romney has decide that pandering to racists and stoking their fears is a winning political strategy.

Now, you could argue that this is true of most of the GOP Presidential Candidates and there would be some truth to that. But many of the other candidates have built their entire political careers by shameless pandering to racists for their votes–they never had a moment where they could have been identified as a moderate let alone a progressive. For example, you could never identify a moment of his political career when Gingrich wasn’t pandering to assholes. It is all he has ever done. Newt is more like Strom Thurmond or Jessie Helms. Romney is different. He is more like Wallace.

The GOP clown car in this election cycle is filled with crazy and that has let a lot of Romney’s code talking and pandering slide under the radar, but it is there. In fact, if you strip away the pandering, there is absolutely nothing left to Romney. Nothing. He has built his entire campaign on a few regularly repeated lies like President Obama hates America that basically boil down to “he is not like us”. Last weekend he sent out mailers in Iowa. Both had images on one side and text on the other. Here is one: 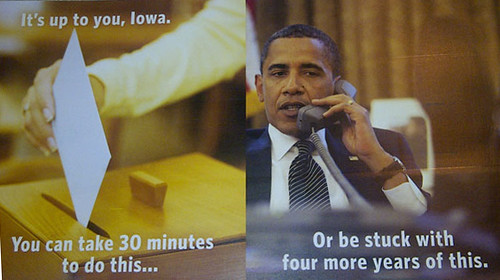 The text side of this was a series of anti-immigration talking points. It was very much a “Fear of a Brown Planet” coded piece. The image of the other mailer used a photo of President Obama with his feet on the desk (I’m almost surprised that Romney didn’t photoshop in a bucket of fried chicken–but perhaps he’s saving that for the General Election). Ironically, the reverse of this mailer had Mittens talking about his “values”.

Willard has become so used to telling lies in his efforts to pander to assholes that he even created his own rules about how to take audio out of context in the service of his bullshit.

In his early political life, one might argue that Romney had values and beliefs. His father did and so it is quite likely that Willard had them as well. In today’s politics, his father would have been a moderate-to-liberal politician and would be as welcome in the GOP as Lincoln Chaffee. Whatever beliefs Willard once shared with his father have been tossed aside. All that matters now is winning and Mittens has decided that walking in the footsteps of George Wallace is a better strategy than walking in the footsteps of George Romney.

And yet, even as I write this I am concern that I am being unfair–to George Wallace. While there are similarities between the two and their chosen path to pursue power, it would be unjust to completely equate Wallace to Romney. After all, Wallace was a successful Governor of a State who was re-elected over and over. More than that, Wallace was aware of the downside to his strategy and had the self awareness to regret the path he chose. In the excellent PBS documentary, “Setting the Woods on Fire”, there is a scene where an old failing, George Wallace looks at the camera and says through a haze of cigar smoke “I was wrong, I was wrong…”. This is a level of awareness that I expect Mittens will never find because when you strip his ambition away, there is nothing there. Nothing at all.

Poor Mittens. He weakly imitates Wallace and hopes that there will be enough assholes who buy his pander to carry him to the White House. But if the Republican Nomination is decide by which candidate does the best job of pandering to assholes for their votes, then Mittens is doomed. In this Gingrich is a Master and Mittens is a frustrated child.

Previous Post: « Newt, Washed in the Blood of the Lamb
Next Post: Saturday night and Sunday afternoon »