You are here: Home / Politics / Crazification Factor / Who’s Next? The race is on… 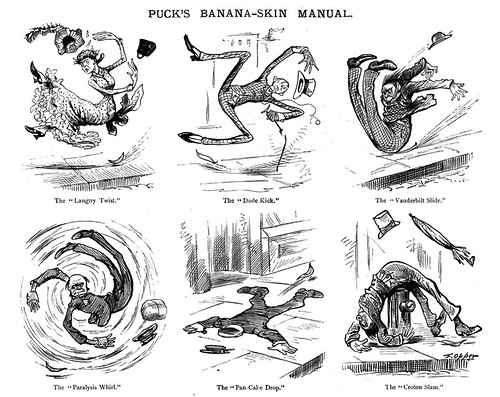 This Frederick Burr Opper cartoon from an old issue of Puck (The Onion/Daily Show of its day) seemed like a perfect image to describe the GOP race for the White House. It is just one pratfall after another.

Now, conventional wisdom tells us that it is only a matter of time until Newt takes a fresh pratfall. In fact, waiting for Newt to slip and crash seems to be Romney’s campaign strategy. And this might be a winning plan as Newt has done the “Pan-cake Drop” so many times that you could almost rename the move as the “Gingrich Drop”. OTOH, Newt has taken so many falls that it is hardly newsworthy. The Professor crashes to the ground so often that his supporters just brush it off. They expect him to do pratfalls and could care less when he does.

By contrast, Willard “Mitt” Romney fears the peel–and with good reason. His recent disaster of an interview on Fox News showed that whenever he leaves his Mitt-buble-of-protection he finds himself doing the “Dude Kick”, “Vanderbilt Slide” and “Langtry Twist” with ease. And yet, the Gingrich surge is forcing him to do just that. After almost two years, Willard “Mitt” Romney will finally go on one of the Sunday News shows. Sure it’s Fox News, but even Chris Wallace will be tossing banana peels at Mitt’s feet (and I’ve heard rumors that Willard might even feel forced to grant some non-Fox interviews and even take questions from the press). Also, too, the Des Moines Register debate on the 10th and another Fox News debate on the 15th will litter Willard’s pathway to January with pratfall peril.

The race is on to see which potential GOP candidate will crash and burn next. Newt is the odds on favorite for that roll. I expect that he will have regular slips and that his supporters will not care, but he could have a massive fall that takes him out. And then again, it could be Mittens who implodes. He really has not been tested in this cycle and has barely left his bubble. Newt needs a massive screw-up to get knocked out of the race while a much smaller fuck-up by Romney might take him out.

As for the rest of the field, I expect them to matter very little in the near term. Bachmann and Perry are comic relief. They fall with such regularity that that is all folks expected out of them. Ron Paul is good at avoiding implosion, but the GOP power brokers hate him so much that the only way he’ll be on the ballot in November is as a Libertarian. And that leaves Santorum and Huntsman who hope if they stay in the shadows long enough they’ll be the last two standing come March or April–and then their pratfalls will be noticed (until then, nobody really cares what they do).

The coming weeks should be quite entertaining.