You are here: Home / Politics / Crazification Factor / To achieve a goal, you have to set a goal…

The first real primary where all the participants are members of the Republican Party base is done. Newt wins and the Mittens coronation tour is over. Trench warfare now begins.

Iowa and New Hampshire will let anybody in to play Republican-for-a-day and influence the results, but South Carolina is different and only the true faithful participate. South Carolina is to Wingnutopia what Mecca is to Islam. In this primary, the 27 percenters are a majority. South Carolina is a center of neo-Confederate thought and conspiracy theories about white victimhood at the hands of the Federal Government The Union are fed to the base from childhood.

Lee Atwater was from here and learned his political skills from Strom Thurmond who learned his trade from “Pitchfork” Ben Tillman who learned his world view as a Red Shirt night rider and a participant in the massacre of Freemen during the destruction of their settlement of Hamburg. From Tillman to DeMint there is a straight line of racism, white privileged and myths of white victimhood that informs the political DNA of South Carolina Republican Primary voters.

If you know that, then it cannot be a surprise at all that Newt Gingrich has surged in this state and that Romney and Santorum are viewed as Yankee copperhead carpetbaggers at best.

Newt knows how to talk the code and how to barely conceal his contempt for the Federal Government The Union and the descendants of people who were once property. He is especially good at code talking about President Obama and the Mainstream Yankee Press.

No surprise he is connecting with his tribe.

A week ago he was suppose to be a dead man walking, but he was able to claw back because he had a goal and a base that would get his back when he let out his Rebel yell. An aide described Newt’s goal to the WP:

“The goal is to get rid of Romney,” Gingrich spokesman R.C. Hammond said. “Our goal is to remove Mitt Romney from the competitive ranks.”

Newt’s victory in South Carolina will go a long way towards meeting that goal. Yes, Romney has a lot of money and backing from the Party elites, but his doesn’t have the neo-Confederates and the 27 percenters who are the base of the Party–they belong to Newt. And if The Professor can mobilize them to his cause and raise some cash, Romney will stand as much of a chance against Gingrich as Mike Castle had against Christine O’Donnell. 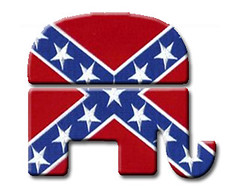 Good luck with that November.

Previous Post: « Newt Wins
Next Post: They don’t look real to me, in fact, they look so strange »