You are here: Home / Past Elections / Election 2012 / Touching the Elephant known as Newt

Remember that old story of blind men touching and describing an elephant? Well, that is the phase of the Republican primary we are in when it comes to Newt Gingrich. Folks are touching this or that aspect of his record and statements and using the narrowness of the exploration to describe Newt. Each of these explorations have some truth, but unconnected to each other they lead to a false impression of The Professor–and that is why he is rising in the polls. Folks see in him what they want to see and in South Carolina they saw a Conservative hero, a neo-Confederate and a fighter for the white race. In the coming weeks and months more and more parts of Newt will be touched and explore–and perhaps a complete image of the man will emerge.

Newt Gingrich has been a character of Wingnutopia since the early 1980s and he is a legend. If you pretend that George W. Bush, his administration and the DeLay Congress never existed, then Newt becomes the only Republican after Saint Ronnie to lead his Party to a historic victory: the 1994 takeover of Congress. Sure, he squandered that victory and was run out of office a few years later, but if you can forget the Bush JR. years it will be easy to push Newt’s shadow material down the memory hole as well. If you only selectively remember history–Newt is a Wingnut hero. If all you do is touch that one part of Newt, then you can easily buy into the Scarborough meme of Newt as Conservative hero.

Of course if you were to touch another part of Newt, your impression might be very different. He is a big ass elephant and there are lots of parts to touch–if you dare. Here is one from a Vanity Fair interview with Jack Abramoff shortly after his scandal broke, but before he plead guilty:

There are other people from Abramoff’s more distant past who also never knew him, such as former Republican House Speaker (and rumored 2008 presidential candidate [and current 2012 candidate with the big ‘mo’]) Newt Gingrich, who first never met Abramoff during the latter’s firebrand days atop the College Republicans. “Before his picture appeared on TV and in the newspapers, Newt wouldn’t have known him if he fell across him. He hadn’t seen him in 10 years,” Gingrich’s spokesman, Rick Tyler, tells me.

That this especially rankles Abramoff becomes clear as he rummages through a box of old memorabilia with me. “Here’s [former Republican Texas congressman and House majority leader] Dick Armey,” he tells me. “Here’s Newt. Newt. Newt. [Former president Ronald] Reagan. More Newt. Newt with Grover [Norquist, the Washington conservative Republican Über-strategist and longtime Abramoff friend] this time, and with [Seattle arch-conservative Republican] Rabbi [Daniel] Lapin. But Newt never met me. [Indicted Iran-contra figure and longtime Abramoff friend] Ollie North. Newt. Can’t be Newt … he never met me. Oh, Newt! What’s he doing there? Must be a Newt look-alike. I have more pictures of him than I have of my wife. Newt again! It’s sick! I thought he never met me!”

When you dig into the record, Newt and Jack stared working together over thirty years ago. Some stories have Jack raising money to help Newt and the GOP win in 1994 and Jack was hired as a lobbyist on the basis of his relationship with Newt and other Republicans who came to power almost 20 years ago. They were wingnut caballeros running scam after scam, but when Jack was caught Newt pretended like they never knew each other. Newt’s low profile in 2004-2005 helped him dodged the scandle and now he gets to run for office with this (and many other stories of his life) swept under the rug.

The Professor is a professional grifter and right now he is working overtime to sell the Scarborough meme that he is a conservative hero. He is a brazen con artist at the top of his game and the gracefulness with which he bamboozles the gullible and the greedy is a thing of perverse beauty. It is amazing the grandeur they find climbing up his ass and how they convince themselves that Newt’s shit does not stink.

Perhaps he will get away with it all and become the Republican Nominee for President.

And perhaps the Myans were right and 2012 is the year of the Wingularity. 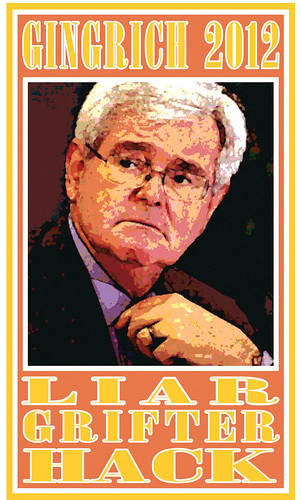