I’m still kind of chuckling that as my father was lying, possibly dying, in a hospital emergency room, his primary focus was not seeing his firstborn son one last time, but making sure his dogs were walked, put to bed, and doted on. It really is crazy how much we love our animals.

I’ve always loved animals. All of them. I’m the jackass who would rather run into a tree than hit a raccoon or squirrel. I love the way cows will lick their noses, with that big pink tongue loping up to the giant schnozz. I think the most beautiful thing in world is a horse running free across a field. I like how silly otters are, the way they swim around, playing to the audience, all frivolous and what not. My best friend in college, Jack, used to joke whenever we went to a party I would spend most of my time with the dogs, which was true.

We had always had a ton of pets when I was growing up. There was Ajax, the dog I was given at Christmas when I was seven or eight years old, who looked exactly like Benji. I woke up, and he was there licking my face, and I named him (Why Ajax? I have no idea.). I loved him, but I was a kid and not a very good owner, and my parents shouldered the burden of taking care of him. We used to call him swampfoot because if you lost sight of him for 30 seconds he would run off to the creek and come back with filth all over him. He was always trying to sneak away, and thought if he could not see you, you couldn’t see him. However, if you called to him and let him know you saw him running off, he would come back, so for years you could hear mom and dad and the rest of us catching him trying to sneak off yelling “Ajax, I see you. Come back.” I have a lot of memories of summer nights when all four kids were too dirty to go into the house after playing all day, and we would line up and dad would hose all four of us off outside, then Ajax, as we all squealed about the water pressure hurting us and it being cold before we were gruffly told to shut up and dry off and go inside. Ajax also loved spaghetti, and would always have a red mustache for days after we let him have some leftovers. Ajax finally died at a ripe old age when I was in Germany in the army.

There was Mister Purr Puff, the cat we adopted from a local fraternity. He was named by my sister (his original name was Boots because he was all black with white feet). He may have been the greatest cat who ever lived- his tail had been cut off about six inches up in one of those industrial metal doors in the fraternity, and he looked like the typical tuxedo cat. All black, white feet, white belly, white stripe down the nose. 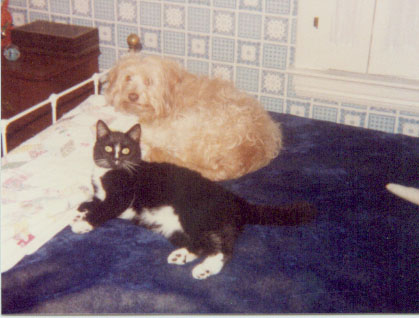 Purr Puff was great. He literally did nothing for 20 years, and he was the most amiable cat you would ever meet. You could do anything to him- my sisters would dress him up in doll clothes and put him in a stroller. He was like Bill the Cat. He would just go limp and let you do whatever. His favorite thing in the world was to just lie on the vents, and unlike other animals, who move when people are walking near them, he would just lie there, as if to say “Go around, Beooch. I’m sleeping and it is warm.” And so we did. I bet dad almost broke his neck 100 times tripping over Purr Puff on the landing at night. He was also a bed slut- when we would wake up in the morning, we would all talk about how Purr Puff slept with us, and then discover he slept with all of us, and would just bedhop until the last person was out of bed.

My favorite story about him is a Christmas dinner that had to have been in the late 80’s before I went to the army. We always have a standing rib with about 7-10 guests. This night, we had a number of guests, so we had to put the extenders in the dining room table, and the place was just too crowded, so dad kept the standing rib on a tray table next to the dinner table. It turns out the tray table was tilting a little bit, so grease and juices from the standing rib were dripping down onto the floor. Except they weren’t- Purr Puff had noticed the drip, and was sitting right underneath the tray table, and juices from heaven were showering down on him. His entire face was covered with congealed beef juice when we finally found him, and he was just looking upward, lapping with his tongue, eyes closed, in kitty heaven. One of my favorite moments from my youth.

When Purr Puff finally died, he was near 20 years old. It was a very sad day.

Then there was Mouse, a grey stray who sort of adopted us, joining our household after we left food out for her for a couple weeks. We called her Mouse because she couldn’t meow, she just sort of squeaked. She was a huntress- lithe and trim, very agile, and totally devoted to my mother. She would only sit on my mother’s lap, and was always bringing us dead birds, chipmunks, moles, etc. This was probably the only cat my mother has ever loved- she is a dog person. But Mouse won her over, and for a decade, mom’s lap was Mouse’s space. Mouse eventually got cancer, and this was in the middle 90’s, and one week they went away on vacation, and while they were gone I just had to take her to the vet and put her down. She was in too much pain. I remember going to Harry’s office and crying as we put her down (Harry is the vet who takes care of my kids and who we’ve talked about here a number of times, as we are good friends). I wrapped her in a blanket, buried her in the back yard, and painted a headstone for her that is still there- “Mouse Cole, a good friend.”

We also briefly had a Pekinese we got from my father’s mother when she died. Brandi, a punchy little pup who had a lot of heart. I wasn’t around much for her, but I do know that my parents think she was the greatest lap dog ever. And she had these tiny little legs, but man, she had heart.

Then there was Russell, the Jack Rusell terrorist we adopted at age four when his owner, David Judy, a brilliant and wonderful and gentle man who really deserves his own post, died. He took over the house. I’ve never met, and still have not met, another animal I was more convinced knew what I was talking about. When you talked to him, there was a person listening. He could smell the concept of round. You could hide a ball in a cabinet when he was not around, and four hours later find him sitting patiently in front of it waiting for you to get the “BALL BALL BALL BALL BALL BALL” because he wanted you to play. Russell was one of a kind, and we all still miss him. 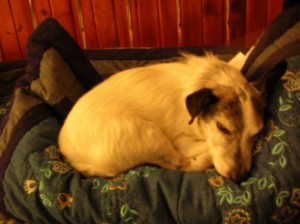 I’ll never forget the time I was home for Thanksgiving, lying on the couch, and Russell wanted on my lap. The only problem was that my sister’s dog Irie was there. So what did Russell do? He problem solved. He went into the kitchen and harassed dad until dad gave him a treat. Russell then carried the treat into the living room, made sure Irie saw it, and then dropped it on the floor. Irie jumped down for the treat, Russell jumped up on my lap, and the problem was solved. It is not hyperbole when I say he was the smartest dog I have ever known.

And I could talk for hours on hours about my sister’s dog Irie, who may have been the sweetest animal who ever lived.

My sister loved that dog more than anything I have ever understood until I got Lily.

I don’t know why it took me so long to get my own pets. I got Tunch almost a decade ago, and he sort of eased me into dogs. Now that I have Lily and Rosie, though, I will never wake up in the morning again without a couple furry critters around. Life is just better with a dog on your lap.

As I lay in bed worrying about my dad last night, it was so nice having Tunch purring in my ear, Rosie’s fat little body pressed up against my leg, and Lily lying in between my chest and my right arm as I lay there stressing and rubbing her floppy ears. It was nice, and it was soothing, and for about 50 bucks a month in food you will never find anything else that makes you feel this good.

I guess there really is no point to this post other than I have been reflecting over the last 24 hours about things. I love my family, I love my animals, and this would be such a better world if everyone focused on that sort of thing rather than getting in other people’s grill about their own personal choices. In addition, when we talk about shitty charities like Komen, remember that for every group of louts, there are ten groups out there doing amazing work. Komen may spend only 30% of what they earn on breast cancer, but you know what? Evelyn Bridges and those beautiful souls at Charlies Angels spend 110% of what they take in rescuing animals. While Nancy Brinker is making a cool half million spreading her bile, Evelyn and those women are skipping meals and shopping at thrift stores so they can dedicate their money to take care of their cause. So don’t give up on charities, because most of them are like Evelyn and company. Give your money locally to food kitchens and people who care.

And I’m really rambling. Love your pet if you have one, and if you don’t, think about going to the pound and getting one, because you aren’t rescuing them, they are saving you, and if you have some scratch, send it to Charlie’s Angels. Or buy something in the Balloon Juice store, because all proceeds go to them.