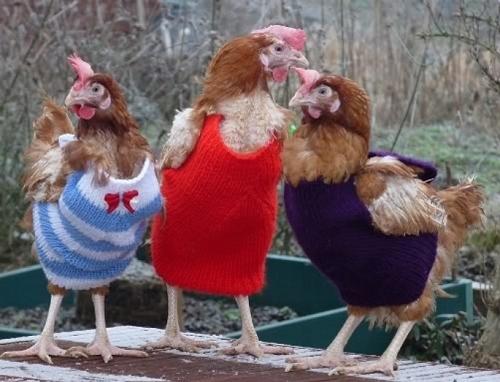 We recently knocked down an old, dilapidated shed in our backyard, and my husband is longing to fill that corner of the lot with something. (The man cannot abide a bare space in the yard.) He thinks we should build a coop and raise a flock of backyards chickens.

I’m not completely averse to the idea, but I suspect it’ll be a lot more of a hassle than we anticipate and that the drudgery involved will fall disproportionately on me. Actually, I think I have a much more realistic view of what it will entail than my city-boy spouse since I spent some of my childhood on a small farm with a flock of 30 or so chickens.

My memories of the chickens are mostly positive except for a couple of mean roosters. And also my father occasionally twisting one of the chicken’s heads off and making my sister and me pluck it for Sunday dinner. (We would both spend years as vegetarians thanks to that and an incident involving a cow we raised [Ferdinand] that was later converted into what my father referred to as “Ferdburgers.”)

Anyhoo, any chickens we purchase in the future will meet a happier fate than the chickens in my past, as we intend to add them to the mix strictly as egg producers and pets (and hens only, so no mean roosters). Still, I’m not entirely convinced it’s a good idea. In an effort to get me on board, my husband pointed out that we do something stupid every seven years, as if that were a convincing argument in the “pro” column.

We do something stupid far more often, of course, but he’s kind of right about the pattern of making possibly dumb decisions with far-reaching implications every seven years or so (getting married, reproducing, moving to the boonies, etc.).

So, does anyone have any experience with backyard chickens?