You are here: Home / Civil Rights / Women's Rights / The War On Women / Here’s Another Lie

We can just add this lie to the list that we started earlier today.

7. Lie #7- Liberals are being hypocrites because Ed Schultz called someone a slut: There is no hypocrisy here whatsoever, because the two don’t even compare in any way whatsoever. Ed Schultz called Laura Ingraham, another prominent right-wing talker, someone who launches barbs with the best of them, a “right-wing slut,” was immediately taken off the air for a week by MSNBC, apologized publicly and profusely to Ingraham, and that was the end of that.

Rush Limbaugh spent three days calling some unknown law student a slut and a prostitute. Not once. Not twice. Not three times. Fifty-three times, to be exact:

5) “You’d call ’em a slut, a prostitute”
6) “she’s having so much sex”
7) “are having so much sex that they’re going broke”
8) “they want to have sex any time, as many times and as often as they want, with as many partners as they want”
9) “the sexual habits of female law students at Georgetown”
10) “are having so much sex that they’re going broke”
11) “having so much sex that it’s hard to make ends meet”
12) “four out of every ten co-eds are having so much sex that it’s hard to make ends meet”
13) “Now, what does that make her? She wants us to buy her sex.”
14) “to pay for these co-eds to have sex”
15) “she and her co-ed classmates are having sex nearly three times a day for three years straight, apparently these deadbeat boyfriends or random hookups that these babes are encountering here, having sex with nearly three times a day”
16) “Therefore we are paying her to have sex. Therefore we are paying her for having sex.”
17) “Have you ever heard of not having sex so often?”
18) “Ms. Fluke and the rest of you feminazis, here’s the deal: If we are going to pay for your contraceptives and thus pay for you to have sex, we want something for it. And I’ll tell you what it is. We want you to post the videos online so we can all watch.”
19) “we want something in return, Ms. Fluke: And that would be the videos of all this sex posted online so we can see what we are getting for our money.”
20) “’If we’re paying for this, it makes these women sluts, prostitutes.’ And what else could it be?”
21) “essentially says that she must be paid to have sex. What does that make her? It makes her a slut, right?”
22) “I’m having sex so damn much, I’m going broke.”
23) “She’s having so much sex that she’s going broke! There’s no question about her virtue.”
24) “having so much sex she’s going broke at Georgetown Law.”
25) “Here’s a woman exercising no self-control. The fact that she wants to have repeated, never-ending, as often as she wants it sex — given.”
26) “She’s having so much sex it’s amazing she can still walk, but she made it up there.”
27) “Maybe they’re sex addicts.”
28) “to pay for her to have sex all the time.”
29) “she wants the rest of us to pay for her sex.”
30) “She wants all the sex that she wants all the time paid for by the rest of us.”
31) “Here this babe goes before Congress and wants thousands of dollars to pay for her sex.”
32) “a woman who is happily presenting herself as an immoral, baseless, no-purpose-to-her-life woman.”
33) “She wants all the sex in the world, whenever she wants it, all the time.”
34) “If this woman wants to have sex ten times a day for three years, fine and dandy.”
35) “to provide women from Georgetown Law unlimited, no-consequences sex.”
36) “so she can have unlimited, no-consequences sex.”
37) “You want to have all the sex you want all day long, no consequences, no responsibility for your behavior”
38) “The woman wants unlimited, no-responsibility, no-consequences sex, and she wants it with contraceptives paid for by us.” 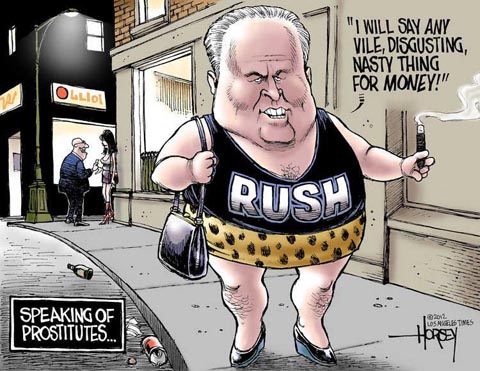 Yeah, that three day sustained assault on a student is exactly the same as one obnoxious and offensive outburst by Ed Schultz.