You are here: Home / This animal is bad. It fights back when it is attacked.

If ever there was a person in desperate need of a good high colonic (preferably administered orally), it’s James Taranto, not least for the insufferable habit of referring to himselves in the first person plural.

This week the collective Jameses hove into view already clutching at their very best pearls and fanning themselves frantically for the vapors, emitting a stream of non sequiturs, calumnies and links so baffling they hurt to read, all in order to convince us how non-u that horrible man in the White House is.

There’s been a lot of talk of late about how “cool” Barack Obama supposedly is. But people are starting to notice the man has no class.

And the Jameses’ evidence for this assertion? That Obama dares to go on holidays when poor people are suffering.

The Jameses cite John McLaughlin, who has apparently conducted focus groups with “blue collar and Catholic voters” in Pittsburgh and Cleveland who are “stuck taking depressing ‘staycations’ because they can’t afford gas and hotels“. McLaughlin (as translated by the Washington Examiner’s Paul Bedard) manages to come to the stunning realization that if you spend several hours with voters letting them complain about the fact that they won’t get to spend five days next to a warm, piss-filled pool in Florida this year, they will eventually blame all sorts of people including the rich, the president, the government, bureaucrats and those lazy lucky duckies the unemployed.

He found that they tend to think Mitt Romney is “too rich,” but “there is a start of resentment of the government.” In Bedard’s words, “voters were also lumping in the president’s vacation spending in with the General Services Administration’s Las Vegas scandal and federal spending for those who aren’t looking for work.” 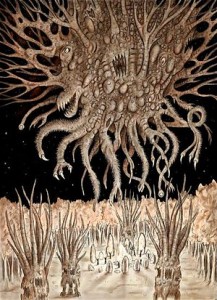 Apparently, if Obama had any class he would stay in Washington and never venture out. Or something. I confess I am not quite clear on the Jameses’ logic here.

That matters not however because, horrifyingly, the Jameses then call on their ultimate source to tell us all how dreadfully beyond the pale Obama is. Can you see? They speak her dreaded name. There is a silence then, as if the universe paused in horror, and she comes, tentacles quivering in the eldritch light, mandibles dripping with venom, waving a mint julep (heavy on the whiskey, light on the mint and the julep) and screaming, always screaming.

Obama is also notorious for his golf outings. Blogress Ann Althouse, another swing voter (she has admitted supporting Obama in 2008), notes that George W. Bush was “savaged” for going golfing “when Americans were fighting and dying.” Michael Moore made hay of it in his 2004 agitprop film “Fahrenheit 9/11,” notwithstanding that Bush had given up golf in 2003 on the ground that it was unseemly: “I think playing golf during a war just sends the wrong message.” Althouse opens her post with a story about the latest casualties in Afghanistan.

Frankly, getting Ann Althouse to comment on class is a little like bringing in Harold Shipman to fix your lumbago and, if you think that simile doesn’t make any sense, I challenge you to do better after you’ve read one of Althouse’s articles in full.

Althouse further criticizes Obama for his appearance earlier this week on the NBC show “Late Night With Jimmy Fallon,” in which, as Althouse notes, “Obama performs 5 minutes of a musically sexualized speech about students. . . . It’s wearing down my sense of the outlandish.” We watched part of the Fallon video and found it to be a head-scratcher. The president seems to be making a serious policy argument (in favor of extending subsidies for college debt), Fallon is sucking up to him, and somehow it’s supposed to be a comedy routine. We guess you had to be there.

The horror, the horror.

The student-debt debate has underscored another unattractive aspect of Obama’s presidential style: his tendency to be always and indiscriminately on the attack. The Washington Post’s Rosalind Helderman notes that the president not only personally attacked two Republican congressmen, Missouri’s Todd Akin and North Carolina’s Virginia Foxx, but grievously misquoted both of them.

Helderman dryly notes that “it is somewhat unusual for a sitting president to single out individual rank-and-file members of the opposition party for criticism and scorn in public speeches.” She quotes Speaker John Boehner: “Frankly, I think this is beneath the dignity of the White House.”

But is anything beneath the dignity of the Obama White House? This, after all, is the same president who has ignorantly blasted the Supreme Court and Rep. Paul Ryan, chairman of the House Budget Committee. The only difference in his attacks on Akin and Foxx is that he is manifestly punching down. What next? Will he go after private citizens?

This past week, one of his campaign websites posted an item entitled “Behind the curtain: A brief history of Romney’s donors.” In the post, the Obama campaign named and shamed eight private citizens who had donated to his opponent. Describing the givers as all having “less-than-reputable records,” the post went on to make the extraordinary accusations that “quite a few” have also been “on the wrong side of the law” and profiting at “the expense of so many Americans.”

Strassel likens Obama’s demonization to Richard Nixon’s “enemies list,” which “appalled the country for the simple reason that presidents hold a unique trust.” It’s an apt comparison, but even Nixon delegated much of his attack-doggery to his vice president, Spiro Agnew. We guess Joe Biden is too goofy for that role so Obama has to do it himself.

Responding to your political opponents and engaging in petty name calling is so déclassé. You’d think Obama would know his place. He’s just like that dreadful Richard Nixon, who we seem to recall was a Democrat.

It seems to us that Althouse is on to something in suggesting that part of the reason Obama conducts himself in such an unseemly way is that the mainstream media are largely Democratic partisans, inclined to give their man a pass. True, there are plenty of alternative media voices now, but it’s relatively easy for a leftist president to dismiss them and continue to enjoy the adulation of the so-called mainstreamers, who have also been suggesting lately that Obama is a shoo-in for re-election because he is so likable.

The McLaughlin findings point to the risk that that isn’t the case. Obama could end up losing because sycophantic media encouraged him to act in such an unseemly way.

Holy shit. I just, can’t even … Apparently the Wall Street Journal is an alternative media voice now, and the news media that has spent the last three years inserting its collective nose carefully into President McCain’s arsehole every Sunday morning is sycophantic because it had a vague realization that the participants in the Republican primaries couldn’t find their own arses with a torch and two well trained bloodhounds.

There’s a parallel in the way the media have strained to play down bad economic news. A couple of hilarious examples come from NPR’s website today: A homepage title asked: “Is Slow Growth Actually Good for the Economy?” (The actual story, which has a less risible title, pretty much answers in the negative.) And an NPR “Special Series” is titled “Looking Up: Pockets of Economic Strength.”

Remember when the economy was strong and there were pockets of poverty? In November, it is possible the voters will.

So there you go. James Taranto says that Obama has no class because poor people are dumb and smelly. Or something like that.

To which we can only respond that James Taranto is a poopy head. He doesn’t give a shit about making a logical argument, so why should we bother?

Now we’re off to watch youtube videos and think about how superior to everyone else we am.