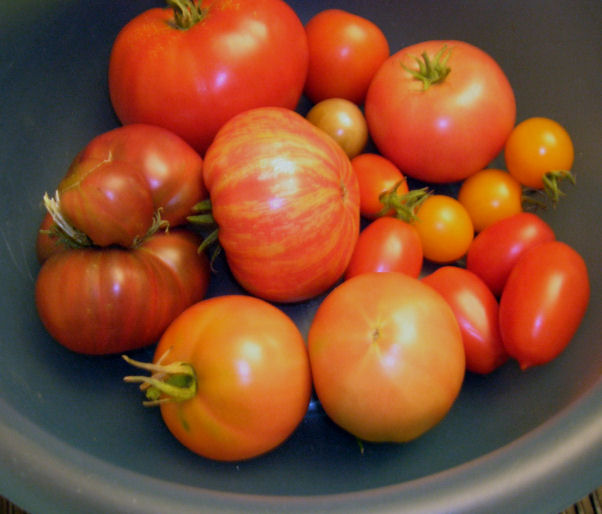 __
Two garden threads in one Sunday, because it’s that time of year. Pic is part of my personal harvest, two years ago. “In the midst of a dreary rainy week I found within me an invincible summer.”

In our little plot, we grow lots of tomatoes, from seed, mostly. Almost all for sauce. And some cherries for salads. We start the seeds indoors around April 5, move them to the porch May 1 and plant them Memorial Day. This year, we had a crop failure, and lost all our seedling tomatoes (and eggplants) by April 26. I used old peat moss as the starter medium. They all pinched off at the soil level.

Despair lasted only a day though. I thought about it: The end result we want is 30-40 lbs of plum tomatoes by Sept. 30 or so. These we wash and grind up, skins, seeds and all, and freeze them. Starting over in late April will likely yield that result, I reasoned. Here’s how I figured that out: Our volunteer tomatoes were trying to tell us something.

Part of the reason I knew this was because the tomatoes themselves told me. I chose to listen to them instead of the foot-tall plants at Home Depot. All the Home Depot plants were telling me was “you’re wayyyy too late, bro.” Our volunteers, however were whispering, “It’s OK, dude. It’s not too late!”

For the past 4 years, we’ve had a healthy crop of volunteer tomatoes, of which we let a half dozen have their heads. Some are Roma-like, some are cherry, some are medium-sized slicers. You never know. Lately, I had been thinking about tomato genetics because I read this: “Scientists Map the Tomato’s Genome.” We know Solanum lycopersicum has 35,000 genes on 12 chromosomes. Every tomato trait – flavor, germination date, size, days to harvest, membrane thickness, texture, color – is encoded on those chromosomes. I also know that hybrid tomatoes — which we like because of their disease resistance — revert to parents starting with the next generation.

Having read “Botany of Desire,” I knew that what looks like a dictatorship between us and plants — with us in the Kim Jong-Il rolle — is actually much more symbiotic. I also learned from my aadventures in Winter Sowing that a plant’s genes are way smarter than I am about plant culture. Trudi Davidoff figured this out a few years ago in an amazing insight into gardening, and has built an open-source movement around winter sowing. Not saying tomatoes are good winter sowing candidates, because they aren’t. But the takeaway is that plants know best. That’s what Michael Pollan, Trudi Davidoff and our volunteer tomatoes were saying.

Over the past 4 years we’ve grown these tomatoes: Black Cherry, Sungold, San Marzano, Super San Marzano, San Marzano 168 F1, San Marzano 15 F1, Sweet Aroma, Nepal, Cosatluto Fiorentino, Bellestar, Brandywine, Sweet 100, Roma VFN F1, EarlyGirl, Celebrity, Ace 55. Pretty good mix. So our volunteers are the offspring of those varieties. Since the parents of the F1 hybrids are trade secrets, we’ll never know for sure the provenance of these volunteers. I DO know that the Roma-shaped volunteers have been stellar. And I also know that any volunteers make their appearance around Memorial Day — or at least that’s when I notice them with their 1st or 2nd set of true leaves. I also know, thanks to Teh Google, that tomato fruiting is highly dependent on nighttime temperatures. The ideal range is 59-68F. And around here, the average minimum daily temperature for May is 52F. So while I lost 3 weeks of top growth, nothing much had been lost as far as fruiting.
What those little plants are telling me is that their genes have encoded for these conditions: mid-to-late spring germination, and harvest ready by Sept. 30 at the latest. In other words, generally speaking, the natural course for tomatoes at 42.43 N, 70.91 W, is to sprout in May and be done by early October. So starting over April 27 or so became no big deal.

And so far so good. Our second seedling crop is about at the same stage as our volunteers: sprouting their second set of true leaves They’re hardened off. And with an average days to maturity of about 70, we should be OK by end of July. Assuming the weather cooperates. And the blight stays away. And we find the tomato hornworms in time.

Apart from dreaming of things that money can’t buy, what’s on the agenda for the end of the weekend?