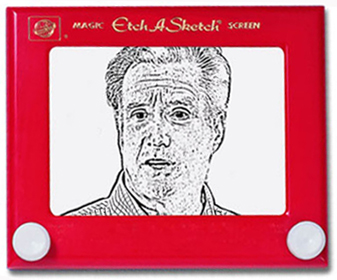 Last week, Mitt Romney mocked President Obama, claiming that Obama misunderstood the Wisconsin recall election results, and that that those results clearly indicated that the American people were tired of hiring all those doggone, good-for-nothing firefighters, police officers, and teachers.

Democrats screamed about Romney’s gaffe (which, as our newest blogger, Leo Soderman points out was not a “gaffe” at all), and sensible folk generally agreed that Mitt Romney was a big stupidhead.  So stupid was Romney’s head, that Governor Scott Walker — who handily beat Mayor Tom Barrett last week in the Wisconsin recall election — felt no compunction as he undermined Romney’s message regarding “what the Wisconsin recall election was about.”

On Sunday’s episode of Face the Nation, Walker pointed out that Wisconsin, firefighters and police officers were protected from Walker’s  union-busting, and further noted that Romney needed to step up his game, kid:

SCHIEFFER: Governor, thank you for being with us. You heard in the opening of the program that the president said that the private sector is fine.

Mitt Romney of course fired back immediately and used what happened out there in Wisconsin as part of his answer. I want to you listen to what he said here.

SCHIEFFER: Well, do you think Governor Romney is talking about getting rid of more teachers and firemen?

WALKER: I know in my state our reforms allowed us to protect firefighters, police officers, and teachers. That’s not what I think of when I think of big government.

SCHIEFFER: A lot of people — or some people at least in the Republican Party even are saying that he (Romney) needs to stand up more for things and not sort of try to be all things to all people.

SCHIEFFER: But you think he can do more along that line?

WALKER: Well, I think people like Paul Ryan and others and I hope that he goes big and he goes bold. I think he has got the capacity to do that. I don’t think we win if it’s just about a referendum on Barack Obama. I think it has got to be more.

But I think it’s really very much left up not just to Republican or conservative voters, but to those swing voters who again elected me by a larger margin than they did two years ago to say, if Governor Romney can show that he has got clear plan, a plan to take on the kind of reforms we need to make America great again, particularly for our kids, I think that can win in Wisconsin and I think it can win in other swing states.

Rather than heed Walker’s advice and articulate his own vision for the country, Romney simply changed his position (as he is wont to do), and hoped that nobody would notice: What?  Who?  Me?  I want to cut firefighters and teachers?  The hell you say! How positively droll!

KILMEADE: He says you’re out of touch. He says you want to cut firefighters and teachers, that you don’t understand what’s going on in these communities. What do you say to that, governor?

ROMNEY: That’s a very strange accusation. Of course, teachers and firemen and policemen are hired at the local level and also by states. The federal government doesn’t pay for teachers, firefighters or policemen. So obviously that’s completely absurd. He’s got a new idea, though, and that is to have another stimulus and to have the federal government send money to try and bail out cities and states. It didn’t work the first time. It certainly wouldn’t work the second time.

First, no. No, no, no — it is not a “very strange accusation,” nor is it “completely absurd,” you nitwit. It’s obvious that you are out of touch and don’t understand what is going on these communities.  If you did understand what is going on in these communities, then Governor Walker wouldn’t have had to correct your statement about the Wisconsin recall election being a referendum on the hiring of  firefighters, police officers, and teachers.

Of course, Republicans blocked the Teachers and First Responders Act because Republicans block everything.  Hell, if President Obama came out in favor of the sun, Republicans would find a way to block it, resigning white tanning enthusiasts to a life of orange Trump-toned skin.

And finally, just stop it.  Stop lying. The stimulus did too work. Yes-huh. It just did. Stop saying it didn’t. You keep saying that, and, frankly, it’s driving some of us a little bit nuts. People who are a lot smarter than you (like P.Krugz and Better than Ezra Kleine Nachtmusik2) agree that the stimulus worked, but that it was too small. Got it? The stimulus worked! It just wasn’t enough. MOAR STIMULUS IS WHAT THE ECONOMY NEEDS. Stop saying otherwise. Please. You’re making my brain itch.

Mittens? Will you please pick a political position and stick with it for more than three days? I’m starting to get whiplash. And, you’re going to drive Steve Benen right over the cliffs of insanity soon.

1 Everybody loves police officers and firefighters — everybody but Eric Cantor, of course.