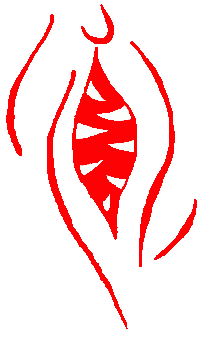 Remember last year when concerned Republicans in Florida got a case of the vapors and had to retreat to their fainting couches because a Florida Democrat used the term “uterus” during a floor debate?  (I wrote about it here.)

In response to the senseless and reckless use of such a vile and repellent term, Florida spokeswoman Katie Betta said that it was important for members of both parties be “mindful of decorum during the debate,” and “mindful of and respectful to visitors and guests, particularly the young pages and messengers who are seated in the chamber during debates.”

Remember that? And remember how we laughed and cried, and it was better than Cats?

I think I may have even encouraged you to go spelunking in your ladyhole in order to discover what untold treasures lie within — treasures that make your netherbits so special that the mere mention of them would cause the collapse of civilization as we know it.

Well, it’s a year later and as it turns out, I may have been on to something.  Apparently, not only is “uterus” an inappropriate and offensive term, but the word “vagina” is, too — at least in Michigan.

You know “vagina.”  You either have one, or you know someone who has one. You definitely came out of one, and chances are you’re trying to get back inside of one right now.

Well, here’s a tip for all you Michiganders: if you’re successful in getting inside one, KEEP IT TO YOURSELF.

Whatever you do, don’t yell “Vagina!” like you would “Eureka!” upon discovering gold at the end of a rainbow, or gaining entrance to a highly coveted and special place. “Vagina” is offensive and will get you a proper scolding and banned from speaking if you dare use the term during a House debate about legislating vaginas:

Lansing – House Republicans prohibited state Rep. Lisa Brown from speaking on the floor Thursday after she ended a speech Wednesday against a bill restricting abortions by referencing her female anatomy.

Brown, a West Bloomfield Democrat and mother of three, said a package of abortion regulation bills would violate her Jewish religious beliefs that pregnancy be aborted to save the life of the mother.

“Finally, Mr. Speaker, I’m flattered that you’re all so interested in my vagina, but ‘no’ means ‘no,'” Brown said Wednesday.

Brown’s comment prompted a rebuke Thursday by House Republicans, who wouldn’t allow her to voice her opinion on a school employee retirement bill.

“What she said was offensive,” said Rep. Mike Callton, R-Nashville. “It was so offensive, I don’t even want to say it in front of women. I would not say that in mixed company.”

“If I can’t say the word vagina, why are we legislating vaginas?” Brown asked Thursday at a hastily called Capitol press conference. “What language should I use?”

“We’re all adults here,” she said.

[read the rest at ABLC]
Previous Post: « The Latest From The American Taliban
Next Post: You’re Calling My Name But I Gotta Make Clear »