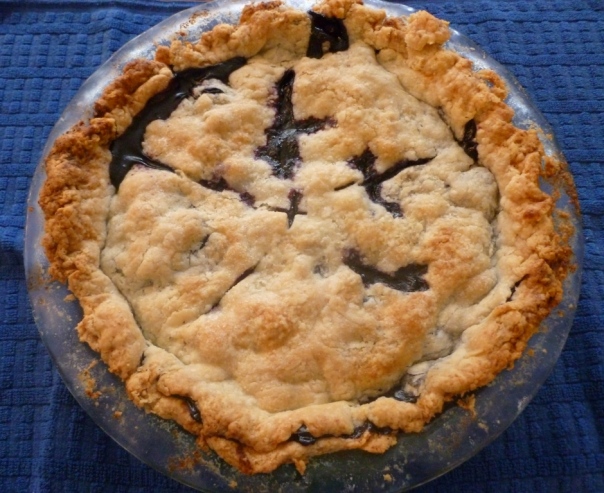 Not bad for my first pastry crust pie. My fluting could use some work.
__
__
From our Food Goddess, TaMara:

In a previous post I wrote about making my first pie crust. To recap, I’d never made one before and never wanted to. Years of hearing friends and relatives lament their tough, tasteless crust, instilled an unreasonable fear that I was unable to overcome. Then two (!) years ago, my friend Alton (not that one) wrote on his blog about a book he was reading called Ratios. In it the author broke down recipes by their ratios, saying this provided for foolproof cooking. Al posted the perfect pastry crust ratio (found here) and I thought, “I can do that”. Then two years passed and still no pies.

When I finally took the plunge, it was so successful (I made turnovers) I decided it was time to jump off the high board and make my first pastry crust pie. I chose my favorite fruit pie, blueberry. I have never been so nervous making a recipe, ever. In the end I think it turned out ok. My fluting needs some finesse, but I was so intimidated, I’m just lucky it wasn’t big lumps on the side of the pie plate.

The only change I would make would be to up my ingredients to 2 cups of flour and work my ratios from that point. My pie plate seemed a bit too big for the crust I had – it’s a 9 inch pie plate, technically, but the fluted edge is very wide. The filling turned out just right, which with blueberries can be a challenge, sometimes runny, but I think I found a good balance between the berries I cooked and the fresh berries I added. I think in all, it wasn’t a bad first attempt and I have gotten past my pastry fear and will do it again.

What’s your favorite type of pie? Do you struggle with crusts or do you have a favorite, foolproof recipe? Anyone try Alton Brown’s vodka crust?

In a saucepan, add sugar, cornstarch, water and 1 cup blueberries. Bring to a rapid boil, stirring constantly until thickened. Remove from heat and set aside to cool. Once cool, add 3 cups of blueberries, lemon juice and lemon zest, fold in completely. Cool in refrigerator until time to put the pie together. I also chilled the bowl I mixed everything in, as well.

Cut butter into small pieces (I actually cut frozen butter, it was easier) and place in the freezer to chill it completely. Whisk together flour, sugar and salt. Using a pastry cutter, cut in butter until it is crumbly. Drizzle in the water and mix together until it forms a loose ball (do not over mix, you want visible butter pieces). Turn out onto a floured surface, knead gently, divide into two equal pieces (I weighed them), form each into a ball and wrap tightly in plastic wrap. Refrigerate for at least an hour. While I was at it, I refrigerated my marble rolling pin and marble pastry board.

To assemble pie: roll out one of the balls until it’s about 12-13 inches (depending on your pie plate size) and about 3/16” thick. To move to your pie plate, flour your rolling pin again and fold the dough over it, transfer to the plate and it should fall into place. Gently form it to the plate and let excess dough overhang the edge – you can brush the edge with water before adding the top pastry. With all the butter, this step really isn’t necessary, it quickly seals itself. Add blueberry filling. Roll out second ball to the same size and thickness. Move to the plate and adjust over the pie plate. Now you can trim the excess dough, or you can tuck it under and then pinch to flute it. Next time I’m sure I’ll experience one of those, but this time, it was pretty skimpy for me to flute.

Bake at 425 degrees for 20 minutes, reduce heat to 375 and continue until golden brown (I had to bake another 40 minutes). You’ll probably have to tent the edges with foil to keep them from burning. I did that at the 25 minute mark. Let cool until just warm to touch for the blueberries to set if you want to serve warm.