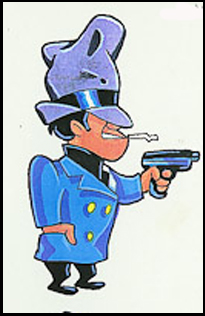 The more the Romney camp tries to unzip the “Mitt as Irrepressible Prankster” meme, the more clear it becomes that either “prank” is an earthling word that Mittbot 2012 cannot compute or else the dude is just a fucking psycho. Here’s a fond remembrance of pranks past published by Tucker Carlson’s puke funnel:

On a Friday evening in 1962, or perhaps 1963, Ben Shaw and his sales employees at the Princeton Prep Shoppe in Birmingham, Mich., were watching traffic roll by as an ordinary work day wound down. But with young Mitt Romney around, Shaw recalls, nothing was ordinary. The future presidential candidate and three friends dressed in what Shaw calls “gangland fashion” hopped out of a 1930s vintage Ford that was double-parked across the street, in front of City Hall and the police station.

The four teens wore “trench coats with turned-up collars and wide-brimmed fedoras,” Shaw told The Daily Caller in an interview.

The pretend gangsters made a beeline for the storefront. One knocked the door open while two others “stood menacingly with their hands in their pockets.” Shaw instantly pegged the fourth member of the team as Romney. The boy “shoved his way in,” he said, wielding a toy Tommy gun.

“This is a stick-up,” Shaw recalls Romney saying, adding that he “proceeded to ‘spray’ the entire store as sparks from the toy flew from the muzzle.”

In the blink of an eye, the pranksters jumped into their getaway car and sped away.

Mock executions, how droll! Of course, teen pranksters attempting such a stunt today would likely die in a hail of bullets as the shopkeepers exercised their right to “stand their ground,” particularly if the teens in question had a greater melanin concentration than Romney and his pals.

Shaw told of another Romney “prank:”

He recalled another staged stunt, “the fireman story,” that happened around the same year during the Christmas season. As holiday business picked up, Shaw kept the store open until 9:00 p.m. during the week, he said, and routinely received truck shipments around closing time.

So when he heard a “loud banging” on the metal delivery door in the back of the shop as he was preparing to lock the front door, he thought it was just another late-night delivery.

But when Shaw opened the door, he explained, he suddenly stood face-to-face with Mitt Romney “in full Bloomfield Township fireman’s regalia.”

“He had on the waterproof cape, the fire helmet, and he was carrying a bona fide fire ax,” Shaw told TheDC, and barged into the store screaming, “Where’s the fire? Where’s the fire?”

The costumed Romney paraded through the store — all the while yelling about a nonexistent fire while swinging the ax over his head — and walked out the unlocked front door. And as quickly as he had barged in, he vanished.

Again, this would result in summary execution for duskier-hued yoots, but one can readily appreciate the shopkeeper’s need to tolerate the “pranks” of a local scion with the juice to commandeer 1930s-era cars, gangster outfits and “fireman regalia” with which to amuse himself with the local merchant class. Especially at the “Princeton Prep Shoppe.”

Someone on Team Romney has an inkling that these events might not put their man in the best possible light since they’ve denied the “Tommy gun” and “ax” portions of the stories while coyly declining to deny the rest of the adorable hijinx, but the shopkeeper stands by his version. Does anyone really think that’s funny? Who the fuck are these people?

Previous Post: « Bust Out the Colposcope, It’s a Party in Charleston
Next Post: Shoulda Called In Dead »