You are here: Home / Unreal Americans

Just to pile on the Sununu meltdown– as one must in this case:

John Sununu does us all a favor.  He comes ever closer to the moment when some prominent Republican just up and says it.  Not Ni-Clang! exactly — but the underlying conviction that lies behind that word.

As everyone reading this no doubt knows by now, Mr. Sununu, former governor of one of the whitest states in the union, former chief of staff to Bush the First and now one of Mitt Romney’s official surrogates, said this today (via TPM):

“I wish this president would learn how to be an American,” Sununu said later. 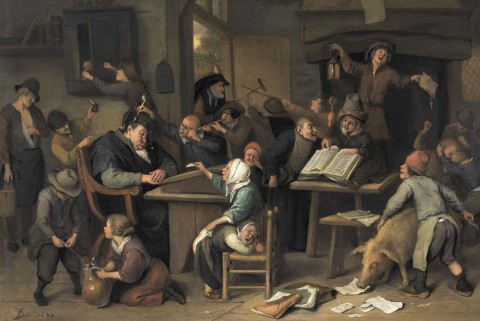 I’m white.  Have been all my life.  Haven’t had to put up with the daily tests that attend being nonwhite in America.  So I’m not going to go on long about this.  But I can tell you that you don’t need to be African-American to ask yourself what you are hearing when John Sununu tells you that Barack Obama, President of the United States, born here, educated here, married here, raising two kids here, the whole run — doesn’t know how to be an American.

I think I can guess:  hell — I don’t need to guess.  As I said, I’m a white guy, but I hear Sununu loud and clear, and what I pick up is a prominent Republican saying pretty damn clearly that African Americans aren’t real Americans.  They need to learn how to pass…

One could say that I’m being overly particular here.  To Republicans, as we’ve seen over several administrations now, Democrats aren’t real Americans.  When on occasion some Democrat manages to dupe the electorate into sending someone with a “D” after their name into high office, that’s simply an error to be corrected, by restricting the franchise to the right people — real Americans — if need be.

But just because a result is over-determined, that doesn’t mean that the most grotesque explanation isn’t true.  As here, IMHO.

A simple yes or no is not quite the right way to respond to that form of the question.  Rather ask:  Did John Sununu just say some racist shit, dog whistling to that portion of the electorate that responds to such filth?

I stand within a tradition that weighs works, not any inner manifestation of piety.  By that standard?

Now the question answers itself.

Image:  Jan Steen, A Class with a Sleeping Schoolmaster, 1672.

Previous Post: « Something to bring up with your Facebook friends, family, coworkers, commuters, teammates and that loud guy at the dog park
Next Post: Open Thread »