You are here: Home / Gun Issues / Gun nuts / Anatomy of a Zombie Lie…

Within less than a day of the Aurora shootings, a BJ reader sent me word of the absolutely predictable gun-nut push to claim that guns prevent more crime/save more lives than gun-use takes.

We’ve seen plenty of that in the days since, with the blame-the-victim, where-are-our-John-Waynes trope getting its usual airing, as it always does after such tragedies.

I wrote on this topic after the Gabrielle Giffords tragedy referencing some of the actual research that shows, over and over again that more guns = more gun tragedy.  Go check it out if you want to be further depressed by the American gun-fetish eternal return of the same pathology.

Here I just want to deal with one zombie lie — the one my BJ correspondent passed on to me:

Guns used 2.5 million times a year in self-defense. Law-abiding citizens use guns to defend themselves against criminals as many as 2.5 million times every year — or about 6,850 times a day. This means that each year, firearms are used more than 80 times more often to protect the lives of honest citizens than to take lives.

That’s from a “factsheet” produced by Gun Owners of America.  GOA helpfully footnotes the two sentences above, claiming independent scholarly support for the claim, which, they assert, is backed up by official federal government research:

And your guns shall set you free, I guess.

But wait just a minute.

One of the things we do at the MIT Graduate Program in Science Writing in which I have the honor to teach is to make sure that our students develop a nose for funny numbers.  Your olfactory neurons should be firing pretty hard right now.  2.5 million instances of gun defense?  1 for every 120 or so US citizens, infants at the breast, gaffers spooning their soup and all and sundry in between?  Almost 7,000 a day, and nary a mention on the nightly news? No blog of “Real American Heroes” or some such?

But what the hell.  It’s documented, right?

Right – by a study from 1994, confirmed, allegedly, by a US government-sponsored analysis in 1997.  So let’s do something radical. Let’s read the referenced material.  Here’s the relevant passage from “Guns in America…[pdf]:”

Private citizens sometimes use their guns to scare off trespassers and fend off assaults. Such defensive gun uses (DGUs) are sometimes invoked as a measure of the public benefits of private gun ownership. On the basis of National Crime Victimization Survey (NCVS) data, one would conclude that defensive uses are rare indeed, about 108,000 per year. But other surveys yield far higher estimates of the number of DGUs. Most notable has been a much publicized estimate of 2.5 million DGUs, based on data from a 1994 telephone survey conducted by Florida State University professors Gary Kleck and Mark Gertz. [the study the GOA “factsheet” references in its claim]  The 2.5 million figure has been picked up by the press and now appears regularly in newspaper articles, letters to the editor, editorials, and even Congressional Research Service briefs for public policymakers.

The NSPOF survey is quite similar to the Kleck and Gertz instrument and provides a basis for replicating their estimate. Each of the respondents in the NSPOF was asked the question, “Within the past 12 months, have you yourself used a gun, even if it was not fired, to protect yourself or someone else, or for the protection of property at home, work, or elsewhere?” Answers in the affirmative were followed with “How many different times did you use a gun, even if it was not fired, to protect yourself or property in the past 12 months?” Negative answers to the first DGU question were followed by “Have you ever used a gun to defend yourself or someone else?” (emphasis in original). Each respondent who answered yes to either of these DGU questions was asked a sequence of 30 additional questions concerning the most recent defensive gun use in which the respondent was involved, including the respondent’s actions with the gun, the location and other circumstances of the incident, and the respondent’s relationship to the perpetrator.

Forty-five respondents reported a defensive gun use in 1994 against a person (exhibit 7). Given the sampling weights, these respondents constitute 1.6 percent of the sample and represent 3.1 million adults. Almost half of these respondents reported multiple DGUs during 1994, which provides the basis for estimating the 1994 DGU incidence at 23 million. This surprising figure is caused in part by a few respondents reporting large numbers of defensive gun uses during the year; for example, one woman reported 52! [That’s once a week, for those of you keeping score at  home. Even if you’re living in a truly bad neighborhood, that’s impressively bad luck as far as being targetted by crime goes.–ed.]

A somewhat more conservative NSPOF estimate is shown in the column of exhibit 7 that reflects the application of the criteria used by Kleck and Gertz to identify “genuine” defensive gun uses. Respondents were excluded on the basis of the most recent DGU description for any of the following reasons: the respondent did not see a perpetrator; the respondent could not state a specific crime that was involved in the incident; or the respondent did not actually display the gun or mention it to the perpetrator.

Applying those restrictions leaves 19 NSPOF respondents (0.8 percent of the sample), representing 1.5 million defensive users. This estimate is directly comparable to the well-known estimate of Kleck and Gertz, shown in the last column of exhibit 7. While the NSPOF estimate is smaller, it is statistically plausible that the difference is due to sampling error. Inclusion of multiple DGUs reported by half of the 19 NSPOF respondents increases the estimate to 4.7 million DGUs.

Some troubling comparisons. If the DGU numbers are in the right ballpark, millions of attempted assaults, thefts, and break-ins were foiled by armed citizens during the 12- month period. According to these results, guns are used far more often to defend against crime than to perpetrate crime. (Firearms were used by perpetrators in 1.07 million incidents of violent crime in 1994, according to NCVS data.)

Thus, it is of considerable interest and importance to check the reasonableness of the NSPOF estimates before embracing them. Because respondents were asked to describe only their most recent defensive gun use, our comparisons are conservative, as they assume only one defensive gun use per defender. The results still suggest that DGU estimates are far too high.

For example, in only a small fraction of rape and robbery attempts do victims use guns in self-defense. It does not make sense, then, that the NSPOF estimate of the number of rapes in which a woman defended herself with a gun was more than the total number of rapes estimated from NCVS (exhibit 8). For other crimes listed in exhibit 8, the results are almost as absurd: the NSPOF estimate of DGU robberies is 36 percent of all NCVS-estimated robberies, while the NSPOF estimate of DGU assaults is 19 percent of all aggravated assaults. If those percentages were close to accurate, crime would be a risky business indeed! 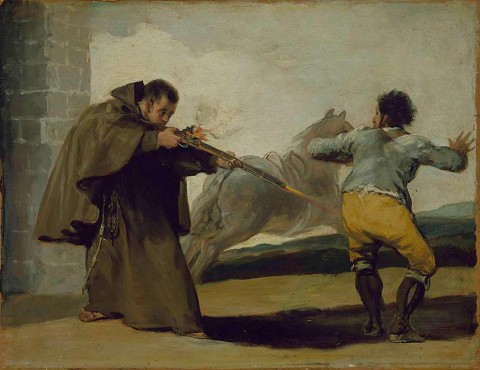 NSPOF estimates also suggest that 130,000 criminals are wounded or killed by civilian gun defenders. That number also appears completely out of line with other, more reliable statistics on the number of gunshot cases.

The evidence of bias in the DGU estimates is even stronger when one recalls that the DGU estimates are calculated using only the most recently reported DGU incidents of NSPOF respondents; as noted, about half of the respondents who reported a DGU indicated two or more in the preceding year. Although there are no details on the circumstances of those additional DGUs, presumably they are similar to the most recent case and provide evidence for additional millions of violent crimes foiled and perpetrators shot.

The key explanation for the difference between the 108,000 NCVS estimate for the annual number of DGUs and the several million from the surveys discussed earlier is that NCVS avoids the false-positive problem by limiting DGU questions to persons who first reported that they were crime victims. Most NCVS respondents never have a chance to answer the DGU question, falsely or otherwise.

[All bold emphases added by yours truly.]

Sorry for such a long block quote, but there is method to my tl;dr madness.  There is a figure out there that has been enshrined as “fact.” Guns prevent crimes — and in such great numbers as to outweigh any tragedy.  13 dead and 48 wounded?  Sad, but merely sacrifices to the greater good of an armed society…

Except, of course, it’s bulsh*t.  The lie persists because the liars rely (soundly, it appears) on the certainty that almost no one will go back through the literature and see if anything they say is actually, you know, true.  The very piece of government research GOA cites as support explicitly and at length debunks the core claim.  But no matter. Who reads fifteen year old reports anyway?

You do, if you’ve stuck it this far.  Lots of other folks — including media makers — have not, at least as suggested by the persistence of this zombie lit.

And so we permit zombies to continue to suck our brains out, as such lies become public policy fact.  Such failure — the failure of folks within the gun community to speak honestly, and the disastrous failure of the media to report the story clearly and accurately — costs lives.  People die.  Kids die, old folks die.  Time and again real people, not mere tallies on a false record of those lost against those saved…are ripped from their families, their loved ones, their own selves.  We can do better, but we choose not to.

Just to drive that last claim home  let me point you to one study from those cited in my Giffords post referenced above:

PHILADELPHIA – In a first-of its-kind study, epidemiologists at the University of Pennsylvania School of Medicine found that, on average, guns did not protect those who possessed them from being shot in an assault. The study estimated that people with a gun were 4.5 times more likely to be shot in an assault than those not possessing a gun.

I’m not a gun-ownership absolutist.  I don’t think we could (politically) or should remove guns from every hand and every home.  But, as Bernard wrote this morning, there’s a lot of room between such a ban and where we are now — and I’d move a long way through that space of possibility.

Which we can’t, as long as the media permit the gun nuts to lie with impunity. I’ve written before about imposing a strict insurance scheme on gun ownership, and I still think that’s a step that could be made possible over time.  But not that nor any other useful idea while we permit the argument to be hijacked by stuff its partisans know to be so, but isn’t.