I’m with DougJ- I used to watch every second of every convention, Democratic or Republican, and I have not so much as watched an instant of it. They are just lying and then parading the 15 or so minorities in the GOP before the camera. What’s the point of watching that?

Think I’ll play some Civ V Gods and Kings while watching the Steelers. Speaking of the Steelers, mom and dad are at the game. They decided to go up, have a good dinner, then go to the game to celebrate their wedding anniversary.

END_OF_DOCUMENT_TOKEN_TO_BE_REPLACED

Look, I know that my hatred of Charles Lane is almost as unhealthy as my hatred of Bobo, but this is fucking ridiculous. Lane suggests that rather than fact check Paul Ryan’s speech last night, the media should go back and fact check a speech Obama gave in February 2008. The idea is that not everything that Obama predicted in February 2008 came to pass, so therefore Glenn Kessler should give him a gazillion Pinnochios.

I am not making this up. He is saying that a speech that the media should drop what they’re doing with speeches given in the last few days and focus on a speech given more than four years ago. Even though the whole idea with this fact-checking thang, whatever its merits, is that it should slap down claims that are verifiably false in the present tense, not attempt to predict the future.

The Kaplan Daily has one blogger, Jen Rubin, who cuts and pastes Romney campaign emails into her posts. Now there’s another out-and-out Romney surrogate.

The whole operation is going under in the next few years. Pride goeth before the fall, I guess.

END_OF_DOCUMENT_TOKEN_TO_BE_REPLACED

I have not watched a single second of this Republican convention. I usually watch more or less the whole thing. It seems to me something has changed, that it’s now just a silly exercise in telling lies. And that’s not compelling tv.

END_OF_DOCUMENT_TOKEN_TO_BE_REPLACED

Add any Colorado public university as a place I do not wish to teach:

Jerry Peterson, a professor of physics at the University of Colorado at Boulder and chair of the Boulder Faculty Assembly, said he would cancel classes if he found that someone had brought a firearm to class, according to the Daily Camera.

Although Peterson said he was only speaking for himself, Philip P. DiStefano, the chancellor at UC-Boulder, sent out an e-mail Tuesday to faculty members that they could not shut down a class if a student with a concealed carry permit brought a gun.Uh.

I really don’t know what to say.
I’m just not sure how it improves the educational environment if during a discussion session, a student might hesitate to criticize an idea from someone packing a Glock.
How about having to decide which kevlar print went best with my slacks on days I was handing back papers?  A “C” can powerfully irritate some folks, I know…
Of course, any constraint on the pedagogical process is secondary to the exercise of Founder-given rights, right?  So said the Colorado Supreme Court last March, thus ensuring that all Colorado public higher ed students can go to class every day secure in the knowledge that if a psycho shooter does show up, they can expect defense in the form of fellow students with much less firearm and incident training than, say, the New York Police Department offers its officers.
I mean, seriously.  What the F**k, America.  You don’t think that there is any zone in which the imminent threat of deadly force might be, you know, inappropriate.
Not to mention the inherent badness of the idea of putting young folks, stress and all the powerful emotion and mood swings that college can evoke in close proximity with firearms. 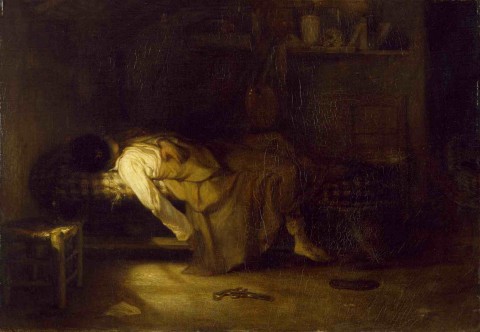 Holy FSM, am I glad I live in the great pagan-pinko-commie-health-care-providing-gay-marriage-pioneering non-gun-fetishizing Commonwealth of Massachusetts.  The winters may suck here, but sweet baby Jeezus and his dumber younger brother,* at least I don’t have to check my students for holster bulges.
I’d make a crack about Darwin awards and all that, but this really is too damn depressing to think about.
PS — Other states are crazy this way too.  It’s not going to be that long before I’m actually going to check on each institution’s policy before deciding whether it’s prudent to accept speaking invitations. Consider this bit of woe:

More than 200 campuses in six states currently allow concealed carry in some form, Burnett said, be it campuswide or only in certain areas.

*The one who turned wine into water.
Image: Alexandre-Gabriel Decamps, The Suicide, c. 1836

END_OF_DOCUMENT_TOKEN_TO_BE_REPLACED

(Jeff Danziger via GoComics – to embiggen)
__
Paul Constant at the Stranger explains “God Saved Me From A Breitbart Documentary“:

Yesterday, I attended a free screening of Hating Breitbart, a hagiographic documentary about Andrew Breitbart. The theater was about a quarter full, but it was packed with enthusiastic teabaggers, eager to cheer on proud conservative comments, especially those that mocked education. Brietbart’s father-in-law shrugs off Breitbart’s origins as a liberal by saying “he went to college, you see.” The theater hooted and cheered. They booed and sneered at a Columbia School of Journalism professor. And they loved the fact that the first forty minutes or so of Haitng Breitbart was an account of James O’Keefe’s anti-ACORN stunt journalism. The end of ACORN is a proud conservative moment.

Find out why here, and while you’re at it, check out some of Constant’s outside-the-security-fences vignettes as well.

Dave Weigel at Slate reports on the RNC response to liberal skepticism about evangelicals embracing a Mormon : “Mike Huckabee, Putting Up with Mormons Since 2012.”

And Alex Pareene at Salon has been doggedly highlighting Arianna Huffington’s not-so-new solution to the unemployment crisis: Con people into “volunteering” as personal servants. Because if America’s gonna achieve its full potential in a New Gilded Age, Arianna knows how much we’ll need a dedicated Servant Class for the Banana Republicans to bitch about!
***********

Apart from human and other monstrosities, what’s on the agenda for the evening?

END_OF_DOCUMENT_TOKEN_TO_BE_REPLACED

I’ve been thinking about a simple Romney Drinking game. I have it narrowed to a choice between two options.

In choice A, you take a drink every time he lies. And in choice B you take a shot when he tells the truth.

But there is a problem.

One of these choices will drain every bottle of booze in the house, while the other will keep you dry all night long.

Perhaps there are some other options.

END_OF_DOCUMENT_TOKEN_TO_BE_REPLACED

The post-punk David Broder (reference) thinks it’s funny when journalists try to do their job:

Franklin Roosevelt: “The only thing we have to fear is fear itself.”

FACT: False! We have many things to fear, including ebola, Spanish influenza and the rise of Hitler.

And a Kaplan editorial board member heartily heh-indeeds the mockery.

Thank Jah all teh kids are on Facebook sexting each other instead of reading the serious newspapers. That may be why they haven’t completely propagandized yet.