You are here: Home / Sports / A Tale of Two Medias

I know the sports press gets a lot of shit for being starfuckers and for glossing over the sins of the giants in professional sports, and to some extent that is very much true. Having said that, I have long been of the opinion that the best written magazine in America is Sports Illustrated, which has standards for writing and accuracy in reporting that far exceed anything you will see in Time, Newsweek, US News, etc. The same used to be also true for Playboy, although not so much as in decades past when they had actual literary giants writing pieces. And yes, Virginia, there are actually people who read the Playboy articles. And I won’t even begin to describe how Rolling Stone blows away most of the rest of the longform political media.

At any rate, I think it is instructive to watch how the print and tv media are treating the current referee shitshow in the NFL and the political media’s coverage of the current Romney campaign. It took a full six months for the media to actually start calling Romney’s lies for what they are, and then only after he doubled and tripled down on the welfare lie. This, despite the fact that this has been the most deceitful political campaign probably ever, as chronicled by by Steve Benen’s relentless and largely unheralded efforts.

On the other hand, Jon Gruden and Mike Tirico on Sunday Night Football have spent the night calling things as they actually are, which is to say, a disaster. No mincing of words. No both sides do it. Just- “these guys are fucking up. Lots.” And they are not the only ones: 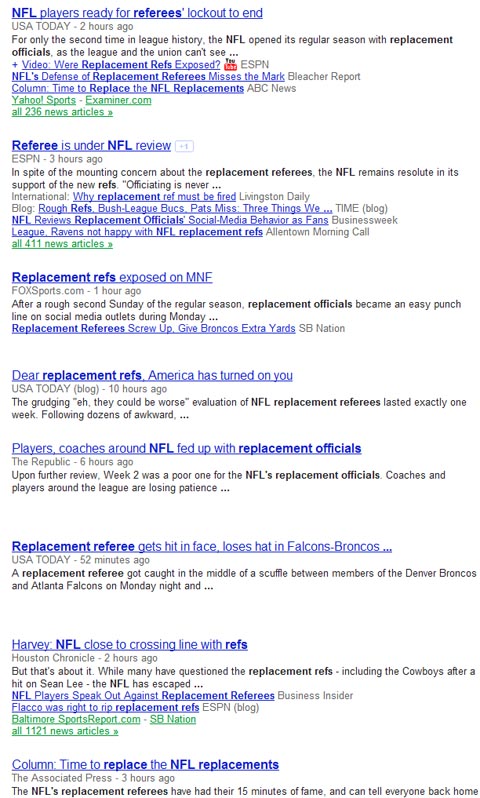 Again, the sports media are not perfect, but I’m sorry, I’ll take Michael Wilbon and Bob Ryan and Ed Bouchette over David Gregory, Bob Schieffer, and Chuck Lane any fucking day of the week. At the very least, sports writers know how to cover an actual fucking horse race.

I hope one of you can find the video for the ESPN post game show I just watched with Stuart Scott, Steve Young, Trent Dilfer, and Bill Polian. Steve Young repeatedly stated what we all know- the owners don’t fucking care because there is, in Young’s words, there is inelastic demand for the NFL. People are going to watch no matter what, and all the owners and the league care about are breaking the union. Dilfer also pointed out what a bunch of hypocrites Goodell and the owners are for all their bullshit about player safety and then putting high school refs on the field. Young was fucking awesome- “The owners don’t care. They don’t care about player safety. They care about breaking the union and the view the refs (labor) as a commodity and you can just throw anyone out there to officiate.”

Steve Young- a rich Mormon who fucking gets it.

Here is the video of Dilfer, Young, Polian, and Scott:

Tell me Young is wrong. And I challenge you to find any political commentary on NBC, CBS, ABC, or anywhere else, that even challenges that for honesty regarding a situation. ESPN is the premiere sports network, and their team is calling out the NFL in no uncertain terms. Tell me the last time any of the networks or cable networks did the same thing in regards to politics.

Previous Post: « NFL Open Thread: Watch Those Hands, Mister!
Next Post: Why Marc Leder and the Sex Parties Business Could Be Kind of A Big Deal »