You are here: Home / Past Elections / Election 2012 / From whence shall my salvation come?

I, like the lovely Soonergrunt, am pretty damn confident about this election. I admit that something could go wrong and six weeks can be a long time. However, I read Nate and Sam and I study their tables and I play with the odd interactive electoral map, and at the moment those all seem to be saying that, provided Obama manages not to call Mitt “honky underpants man” in the debates or start a war with Israel and wins either Florida or North Carolina, there’s a pretty damn good chance he will win the election.

I am strengthened in this belief by several things, including my faith in Obama as a canny politician; the fact that Mitt and his entire royal court seem to be incapable of opening their mouths without telling an easily disprovable lie or a ridiculous half-truth, telling the unpalatable truth on video, having a hissy fit at journalists, using the words “you people” or calling attention to the stupid thing they said three weeks ago that everyone had almost forgotten about; and the fact that Dick Fucking Morris, the anti-Sibyl, a man who couldn’t predict it if his own arse was going to fall off, says that Obama is going to lose because (says Dick) he has to win young, black and latino voters at historic levels and (says Dick) they aren’t going to show up to vote.

Frighteningly, there is a whole world of Dicks out there, all of them believing that Romney absolutely will win.

For example, the other day someone on Balloon Juice (I can’t recall who because I am old and drunk) pointed to Unskewed Polls where polls are “unskewed” by “re-sampling” them based on Rasmussen’s “Partisan Trends” report which says that the number of Republicans in the US is at a record high.

There is a wonderful post here, where someone called Dean Chambers will explain to you how the method works, using an extended and ineffably tortuous “Student Government Association (SGA)” metaphor that has to be read to be believed.

A political science major who is known to be conservative points out most of the polls are skewed because they included far more than 33.3 percent education majors in their polls, and for that reason, get results “skewed” in favor of the education major who is the incumbent president. This conservative political science major points out if the samples are weighted to accurately reflect the student ratio between the enrollment in the the three colleges, the polls would report more accurate results. So by applying this weighting, the polls are “unskewed” and they all show the business major challenging the SGA president to be in the lead 56 percent to 44 percent. They call him crazy and he says the real poll on election day will prove him right.

Unsurprisingly, you might think, these resampled polls show Obama having an approval rating averaging about -8, and Romney massively ahead in the popular vote: 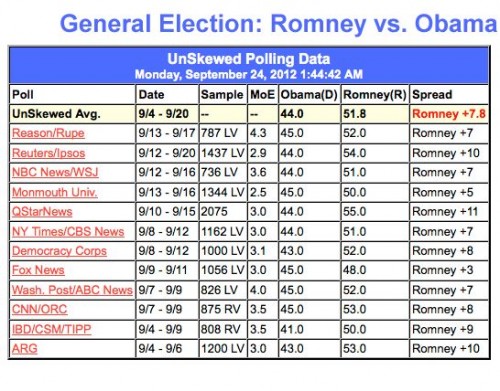 Another nice person mentioned the American Thinker, a font of pure, sparkling dumb of which I had not previously been aware. Romney is going to romp it in according to the Drive-By Pundit, who is apparently a gentleman of the black persuasion.

Book it: Romney’s going to win this election in a romp come November. I’m certain of this because there is a key factor that’s being overlooked this time around — blacks have lost their passion for Obama.

I see that loss reflected in the faces of my fellow blacks, who at the mention of Obama’s name no longer beam with rapturous joy — something we blacks normally reserve for winning lottery tickets and intimate getaways with persons not our spouses. As the saying went in the ‘hood where I grew up: “If he looks happy, he’s either hit the number or he’s cheating.”

I also hear it in their voices. Back in 2008, when blacks spoke of Obama, it was like they were describing an encounter with the divine. Obama was “The One” and the “savior of the black man,” as my Aunt Gladys shouted over the telephone to me after learning I was backing McCain. Now what I’m hearing are sentiments more in line with “Give the man a chance” and “He needs more time to turn things around.” Blacks are clearly engaged in excuse-making for a failed deity.

But most of all, I see blacks’ loss of passion for Obama in their eyes. Before, when blacks spoke of Obama, they looked you square in the eye with confident, euphoric gazes, much like a cat eying a cornered mouse. But the reality of double-digit unemployment, diminishing household incomes, and soaring gas and grocery bills sank in long ago in the black community. Now when blacks talk about Obama, their eyes are listless and dull, almost despondent.

Oh sure, when it comes to their waning ardor for Obama, blacks put up a good front, especially around whites — i.e., pollsters. But I know my people “like every square inch of my glorious naked body” (a little Rush Limbaugh lingo there). When in the wrong and confronted by whites, blacks will always hide their true thoughts and feelings, much in the same obstinate way as their refusal to admit that O.J. did it. (He did, by the way.)

These people, and millions of wingnuts just like them genuinely think that Romney is going to win, and win comfortably. If (when) he doesn’t, as my Australian friends would say, the dummy spit is going to be epic.

I’ll leave you, dears, with another nut picked from the American Thinker. This is a little off topic, and I don’t have the strength to pick it apart, but it’s too awful not to share with you. This is a keeper – 762 words of pure nut brittle, studded with lies and snobbery and contempt and whistles, with a side of strapping, drug-addled young bucks. It’s horrible. Meet Eric Homes.

After years of trying to figure out who Barack Obama is, I think I have found the solution. I’ve read countless stories of various theories which describe him as (1) a communist, (2) a Muslim, (3) an anarchist, (4) a New World Order proponent, (5) a narcissist, or even (6) an anti-christ.

Though after watching his behavior the last few years and reading all I could on his background, I believe that the motivation behind Barack Obama is that he has no ambition, and what drives him is a life of leisure with wealth and no responsibility.

Rather than a lifetime of achievements and years of toil at anything, the evidence points to a person who enjoys all the fruits given him. Some have reported that he doesn’t really like being president. According to Investors Business Daily, he skips over half the daily intel meetings, he has more time on the golf course than attending economy meetings, and we also know he takes more vacations than any previous president has taken. During the most recent crisis, he spent his time in Las Vegas, on talk shows, and rubbing elbows with celebrities.

In the study of successful people, they all have in common years of hard work, and tens of thousands of hours of practice and study, all beginning at a young age. What did Obama do during his youth? He smoked dope and complained that he didn’t get more playing time during his basketball games.

Regardless of how he was able to be accepted to all the schools he attended, what did he do while in school? He hung out with friends and accepted a vacation to Pakistan. At Columbia he was so uninvolved that no one remembers him. At Harvard he was appointed to president of the law review, where he never wrote anything. For this achievement he was given a large book advance which he spent on a long vacation to come back with nothing. Eventually he wrote a book, though the analysis of Jack Cashill indicates that he didn’t actually author it. Bill Ayers is quoted as saying he wrote it.

After graduation, he worked a little with no real achievement as a political activist. As a lawyer, he has no records and only memories of others as having his feet up on his desk all the time. He won his first couple of elections when his opponents dropped out. While in office he had the famous record of voting present. As a U.S. senator he wrote no bills, nor did he introduce any significant legislation. He spent his final two years campaigning for president. Up until this point, his greatest accomplishment was giving a speech at the Democratic Convention.

As a president, he signed bills others wrote. He has been on date nights to NYC, golfing at Martha’s Vineyard, and vacations to Europe and Hawaii. He shuns meetings with other world leaders, while his biggest summit was settling the differences between a policeman and a college professor.

From all the times I have seen him speak off the cuff, I speculate that Obama really doesn’t know much because he doesn’t put in the homework to learn. His 2008 campaign speeches about reforming health care are elementary; his fix for the energy crisis — namely, that everyone add air to his or her tires — borders on stupidity. He quickly weighs in on the Cambridge police or the Trayvon Martin case, because these are issues on the TV news. He changes his mind on important social issues not by reading legal reviews, but rather by watching cheap TV shows. Yet he seems so uninformed about history and world events.

Of course, 57 states, breathalyzers, Navy corpse-men, the Austrian language, and bowing to foreign heads of states are all famous gaffes; they reveal a pattern — Obama doesn’t care to know or study. He smugly quipped that he already knew the difference between a Shiite and Sunni before he was assigned to his committee in the Senate. It as if he was saying, “I’m so smart already that I don’t need to learn anything.”

Granted, he is a millionaire, though mostly from royalties from a book he did not write. He received a sweetheart real estate deal from someone who would later be a convicted felon. Lately, World Net Daily is reporting that Obama is shopping for a mansion that someone else will buy for him in Hawaii.

For all he is credited or blamed for, future history most likely will reveal that Obama was just a puppet for others. This is his ambition: live like a king, and never work.