You are here: Home / Past Elections / Election 2012 / Scott Brown goes for a triple play… 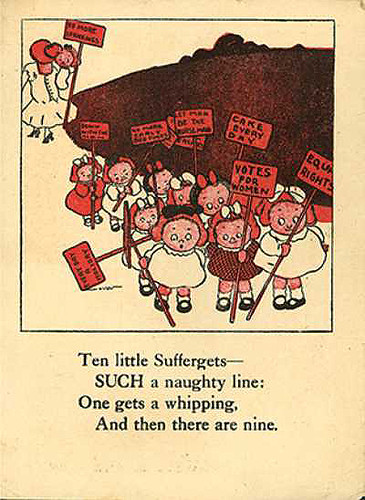 I found the image above when I was searching the internets for something else. It is from a book called Ten Little Suffergets. Stephen Gretz wrote about it on the Booktryst blog. When I saw the post it reminded me of Scott.

Ten Little Suffergets was written roughly a hundred years ago. It was propaganda designed to oppose the effort to win women the right to vote. The goal was to put women in their place through scorn and ridicule. The choice of the Ten Little _____________ meme was telling.

It was a popular song and theme for children’s books designed to teach little white kids about the people that needed to be kept in their place. A century ago the most popular version of the meme was Ten Little Niggers (Agatha Christie even used it as the title for one of her mysteries).

The words to Ten Little Niggers were written in 1869, but the meme started a year earlier in 1868 with a minstrel song called Ten Little Indians. It was always popular and when when Ten Little Niggers fell out of favor as an acceptable title and meme, folks just used Ten Little Indians as the go-to replacement. Many still do, but even this old racist meme is starting to fade. Still, the irrational hatred of Native Americans runs deep. Over the years a politician could almost never go wrong attacking the “savage redskins” and “lazy injuns”. Fortunately, that line of attack–like the Ten Little Indians meme–is falling out of favor these days, but oddly it is a line of attack that Scott Brown seems all too happy to embrace.

1. Native Americans are bad (of course) and they get wild advantages in life that white men never get.
2. Thanks to Affirmative action and the blacks, folks like Elizabeth Warren can claim minority status to get endless unearned benefits–benefits stolen (with the help of the liberals ) from deserving white men.
3. And of course: uppity women threaten white men everywhere.

No doubt, Scott will have some success with this blatant appeal to the demons of white male fear (witness his witless supporters and their “war woops”).

OTOH, it may help to expose him as the complete wingnut that he actually is. That would be a good thing.

By the way, you could follow this link to make a small donation to help Elizabeth Warren beat this asshole.