Excellent management skills from Mitt Romney and the RNC:

The Republican National Committee has abruptly cut ties to a consulting firm hired for get-out-the-vote efforts in seven presidential election swing states after Florida prosecutors launched an investigation into possible fraud in voter registration forms.
Working through state parties, the RNC has sent more than $3.1 million this year to Strategic Allied Consulting, a company formed in June by Nathan Sproul, an Arizona voting consultant. Sproul has operated other firms that have been accused in past elections of improprieties designed to help Republican candidates, including dumping registration forms filled out by Democrats, but none of those allegations led to any criminal charges.

This is voter registration fraud, not “voter fraud” and this is how it happened: the job was outsourced to a for-profit and low-wage, poorly-trained temps who have no actual interest in or commitment to either voting rights or their short-term employer met a goal by turning in forms.

You’ll forgive me if I gloat a little here, because it gets better. They also outsourced GOTV:

Strategic Allied Consulting was hired to do voter registration drives in Florida, Virginia, Colorado, North Carolina and Nevada, and had been planning get-out-the-vote drives in Ohio and Wisconsin, according to Sproul.
Sproul owns another company, Lincoln Strategy Group, that was paid about $70,000 by the Mitt Romney campaign during the primaries to gather signatures. He said he created Strategic Allied Consulting at the request of the Republican National Committee because of the bad publicity stemming from the past allegations. In 2004, there were allegations in states such as Nevada and Oregon that employees of his firm — which had a similar contract with the RNC — registered Democratic voters and then destroyed their forms. (Sproul noted that no criminal charges were ever filed.)
“In order to be able to do the job that the state parties were hiring us to do, the [RNC] asked us to do it with a different company’s name, so as to not be a distraction from the false information put out in the Internet,” Sproul said.
The RNC’s rapid decision to distance itself from the company derailed a major voter registration drive just six weeks before the presidential election, which could hinge on voter turnout in about eight battleground states. It also comes as Republicans around the country have sought to make voter fraud an issue, in part by pressing for voter identification laws.

The Party that has conducted a full-blown voter suppression strategy since 2005 outsourced voter registration and GOTV to a for-profit operator with a terrible track record, and now they’ll be scrambling to find warm bodies 6 weeks before a presidential election.

Couldn’t happen to a nicer group of people.

END_OF_DOCUMENT_TOKEN_TO_BE_REPLACED 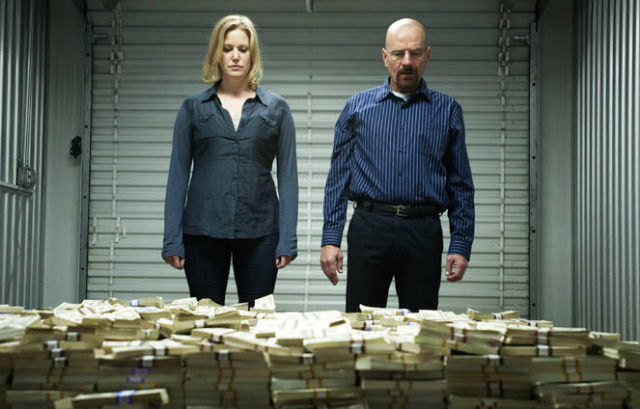 Apple’s CEO just apologized for the IOS6 Maps application and recommended that users download a different app from the App Store. If you want to know why, this site will give you a few examples.

I’m a pretty hardcore Google user so take this all with a grain of salt, but I don’t see a quick fix for Apple here. I had thought that they were using Open Street Maps, which is sort of Wikipedia for maps, but it turns out they licensed the street maps from TomTom, which makes GPS units. The satellite images come from some other vendor, the traffic from another, and transit maps from nobody.

Google has been doing maps since 2005. They have 7,000 employees working on maps. Six thousand of those are contractors, many of them collecting data for Streetview and overhead (aerial and satellite) maps. Some of them are correcting maps by hand after comparing them to photos. Google invented a standard for transit map data. They are inventing self-driving cars to get more Streetview data. In other words, they rolled their own, and the reason they did is that good maps are integral to their business, since they want to tie searches to the real world.

If you think I’m too much of a Google fanboi, let’s talk about Nokia. When Nokia wanted better maps on their phones, they paid $8.1 billion for Navteq. From what I’ve seen, Nokia’s smartphone mapping apps are very good.

Apple shows no such level of commitment to maps. Even though they are the Walt and Skyler Whites of corporate America — they have so much cash they will soon be stacking it in a storage locker and wondering how much is there — they haven’t spent that cash to buy or build a decent mapping solution. Maybe there’s some super-secret Google-scale mapping operation working from some deep underground lab in Cupertino, but if not, why the fuck can’t Tim Cook whip out his checkbook and buy TomTom? Instead, he’s writing weak-ass apology letters. Steve Jobs, who never fucking apologized for anything, must be spinning in his grave.

Update: I know that Jobs apologized for a number of screw ups. That last bit is hyperbole.

END_OF_DOCUMENT_TOKEN_TO_BE_REPLACED

I know I retired and all that, but my inner blogger won’t stop bothering me until I type down a couple of things.

The big victim in the new un-skewing business is not so much movement conservatives, who do get progressively dumber every time an opinion leader decides they need to believe something that isn’t so, but Rasmuessen Reports itself. Scott Rasmuessen had a nice business model going as the FOX News of polling outfits, but his gig depends on flying under the radar. Who digs into party ID demographics when a poll comes out? Before Nate Silver, nobody did that. Now the list includes Nate Silver and the still-smallish number of people who read and talk about his blog. When the GOP needed a bounce, Ras just tweaked his demographics and the Republican pulled ahead. When they want a tight race Scott tweaks them back down again. Maybe the party needs to make it look like a Democratic gaffe had big impact in a couple of swing states. No problem! Since 2000 Ras made a point of bringing their demos in line by the last weeks of October so they finish in the middle of the pack on election night, which is the only time that counts when pollsters get ranked. As an exploit it’s up there with the tax trick in SimCity 1 where you could keep tax rates at 5% all year (explosive growth!) and hike it to 95% in the last week of December.

Faking a tight race takes serious work right now, so Ras has needed to ‘assume’ a pretty out-there distribution in party ID. Supporters and donors need just one more excuse to make tracks for local races, at which point the growing Romney stink would become a self-confirming prophecy, so you have to think the party is leaning pretty hard on Ras right now. Problem is, all of a sudden everyone is talking about voter ID demos like it’s the most important thing in the world, and Scott just got a whole lot less room to maneuver. That could become a real problem when he needs to tack back to reality in a couple of weeks. If Ras can’t pull it off the wild variance between his final line and the election results will, a) sink his credibility with normal folks, and b) supercharge Obama’s legitimacy issues with the dittoheads and the tea partiers. That last bit is a problem for all of us.

2. Curse your sudden but inevitable betrayal

Please stop with the buzzing about Conor Friedsdorf. The guy is a Republican operative. He does not write in all caps about birth certificates and Eric Holder implanting brain control chips using Fast and Furious Agenda 21 invisible helicopters to double-reverse steal your guns because that is not his beat. He and Megan McArdle play good cop to Michelle Malkin’s bad cop and Jennifer Rubin’s Baghdad Bob. Conor sells Republicanism to people who speak a foreign language. Folks who read books without pictures need to hear that you weighed all of the evidence in a careful manner, including if necessary ‘evidence’ from McArdlebargle’s magic calculator, that you scratched your chin in the way that serious people do and decided that in spite of all of the things that you like about the Democratic candidate, you just-durn-it have to go with the Republican this year.

His usual crowd will have a hard time buying that schtick with a product like Mitt effing Romney, so young Conor needs a plan B. Thus Conor, his Very Serious libertarian friends and Glenn Reynolds (also known as ‘the tell’) have grown this sudden raging stiffy for the Green candidate. Maybe you can’t sell Mitt, and one wonders when even the hard working Ms. Rubin will throw in the towel or throw a gear or something, but you can help Greenwald and the PUMAs sell their symbolic quest. Gary Johnson, the actual Libertarian candidate, is a serious problem for young Conor and he would just as soon you did not use his name in public.

END_OF_DOCUMENT_TOKEN_TO_BE_REPLACED

Sam Wang has a new House piece up, and he thinks the House is on a knife edge, with a 74% probability of a Democratic takeover.

Dave Weigel wrote a piece about redistricting that cherry picked a few good Republican outcomes, and Wang’s pushback on that is worth reading. The net of it is that the kind of swing we could see in this election (Wang estimates a D+9 change from 2010) can overwhelm careful redistricting.

We haven’t talked much about the House, so here’s a thread for your own local races. In mine, the new NY-25, we just had a poll showing Louise Slaughter, the incumbent, beating a strong Republican challenger by 10 points.

END_OF_DOCUMENT_TOKEN_TO_BE_REPLACED

Hey.  I’ve atoned. The year stretches before me, sins to accumulate!

And it’s almost the weekend.  Not even the prospect of a visit with my periodontist can dampen that reality.  So how about a completely non-political demonstration that someone else on the internet has too much time on their hands:

With that, consider this a completely Conor free, start-the-workday-as-you-mean-to-go-on Open Thread.

END_OF_DOCUMENT_TOKEN_TO_BE_REPLACED 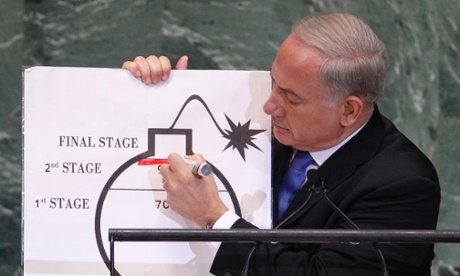 This guy, the one who addresses the UN with an Acme Labs drawing of something that goes boom, is the person to whom we’re supposed to outsource our Middle East policy?

END_OF_DOCUMENT_TOKEN_TO_BE_REPLACED

Glibertarians crack me up repeatedly.  They’re so awful, they apparently abandon their own candidate because it’s the mavericky thing to do.

The Reason-Rupe September 2012 poll includes our favorite ideological questions to differentiate libertarians from liberals and conservatives. Using three questions, we can define libertarians as respondents who believe “the less government the better,” who prefer the “free market” to handle problems, and who want government to “favor no particular set of values.” These fiscally conservative, socially liberal voters represent 20% of the public in the Reason-Rupe poll, in line with previous estimates.

Among these likely libertarian voters, the presidential horserace currently stands:

Considering these chuckleheads happily voted for Bush’s re-election in 2004 59%-38% over John Kerry despite Cowboy George getting us to some awesome wars where we dropped all kinds of liberty on people half a world away, I don’t think your definition of “libertarian” actually means what you seem to believe it should.  And this year, once again, they have no intention of voting for the actual libertarian candidate.

Now, if you define “libertarian” as “Hypocritical Randian austerity-loving misery junkie war pigs” then yes, you have a point.  But let’s be honest, these guys are really just plain old garden variety Country Club Repubs and have been since the Reagan years.

Self-hating Republicans, the lot of them.  Just switch the faith of choice from Talibangelical to Church Of The Invisible Hand Dropping Bombs, and that’s the only difference.